Today seemed to be heading for a no news day. Because of the absence of key personnel the site was not opened up to the work force in general but a few things were happening just the same.

The blog is a bit thin today for the reason stated above but before today's news a recap on Wednesday's blog which didn't mention the cementing in of the cast iron manhole covers along the drive side of the building. 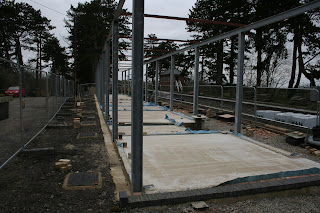 The temporary wooden covers that had been in place for a couple of weeks were removed which allowed the metal frames to be built in, followed later in the day by the careful placing of the covers in the frame while the cement was still a little moist.

One of our stalwarts is Vic who decided that that there would not be any let up today for the weeds in the flower bed alongside the drive. 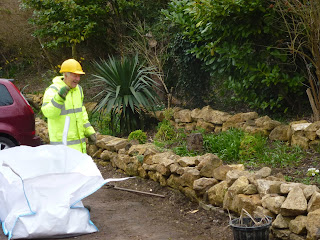 Vic was also able to provide some company to Ann & Brian who staffed the bric-a-brac stall and had a decent day, well done you two.

One man who was on site today was Ron from Harvey Moon Ltd the company that had shotblasted the footbridge and is now painting it. 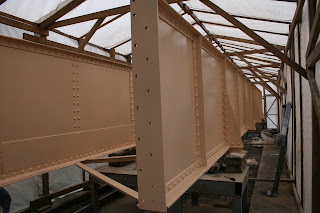 This view from inside the tent is along the outside of the main span after Ron had applied the third coat of epoxy based undercoat. The top coats will be light stone in the panels and dark stone for the frame work. 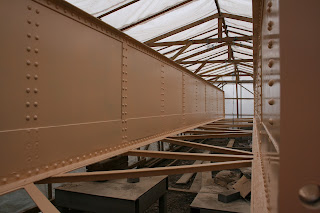 And how it looks along the inside of the footway. It looks good now, it will look brilliant when its up and in position. 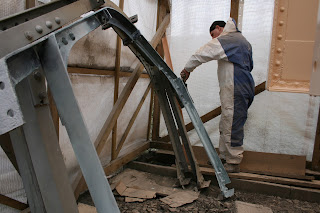 The last view of the bridgework shows Ron applying the Ferrozinc rust neutraliser to the hoops that will support the roof structure. According to Ron the black areas show where the paint is doing its job

Some of us took the opportunity to venture into a local auction house to see if we could win a station sign that would enhance our collection. 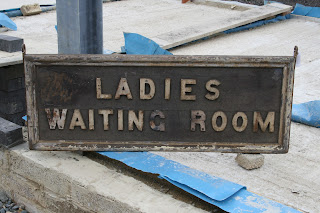 We were successful in our endeavours, this is what we wanted. Granted, we will not have a Ladies Waiting Room as such but we will have a Ladies and the purchase of this sign certainly gives us some options. This shot shows the sign sitting on the edge of the room to which it applies.