As sometimes happens on a Monday, when something significant has been achieved, a brief picture oriented blog to record events.

Today was the day planned for the concrete pour of the station building floor. Unfortunately things did not go strictly to plan because the first delivery of concrete arrived later than expected due to an apparent problem at the mixing plant (someone said they ran out of cement!). 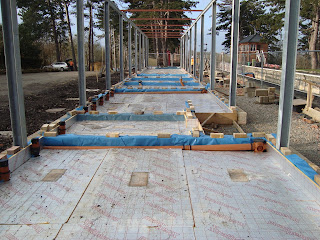 As the floor was just before we started with the concrete block "paperweights" removed from the top of the sheets of insulation. 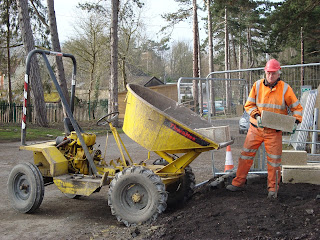 Jo, with a little help from the others, loading the blocks onto the dumper for transportation to the base of the footbridge tower where they will be used to build a retaining wall. 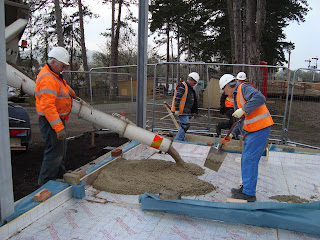 The pour starts with John C directing the chute and John O wielding the shovel in the kitchen area. 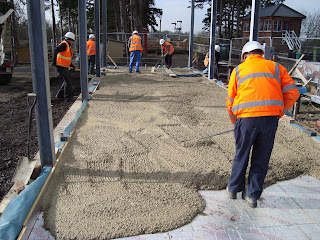 After a few shunts by the lorry the first delivery is offloaded, much pushing and shoving of concrete now ensues to get it where its needed in the shop/café area. 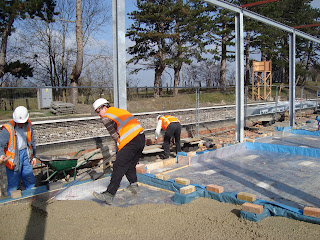 Things have moved on now and following the second lorry load the booking hall is nearly complete. Meanwhile, in the background, Paul has found carpentry skills he never knew he had! 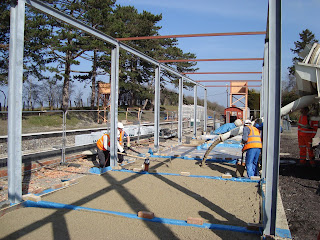 The last load for the day and time running out. Because of the late start only 6 of the 7 rooms could be completed. The gents loo waits for another day, probably Wednesday. 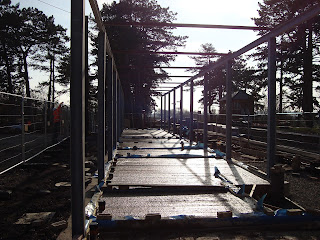 Looking into the setting sun at the end of the day gives a good impression of what we achieved.