Preparing to Bridge the Gap 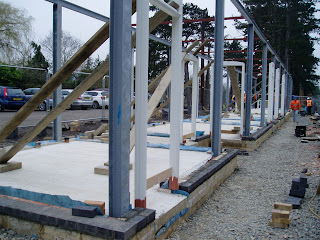 
First a quick update on Monday when eight volunteers worked on the station building. This picture, taken early this morning, shows that by the end of the day some of the door frames had been positioned and a start made on the brick laying. 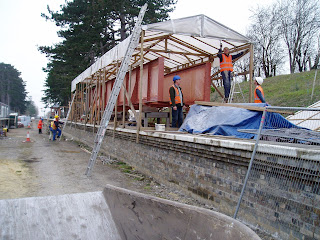 One of the main jobs for today was the dismantling and removal of the shelter over the footbridge centre span. The contractors have finished painting and the span needed to be uncovered so that the roof support hoops can be refitted. Also the timber flooring will be refitted before the span is lifted into place in two weeks time. This will be done in time for the launch of the "Last Mile" share issue which is due on April 6th. 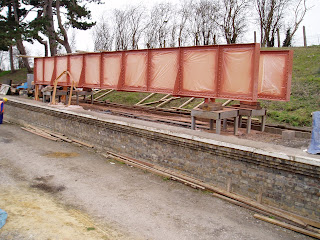 Although this was a huge task, by the end of the day the job was done and the span was exposed and in it's new paintwork. The team led by Peter Q and including Dave H, Keith, Ron, Brian, with help from others at various times had done a terrific job. Before you query the colour of the panels, they are still covered to protect them from overspray when the frames were sprayed. 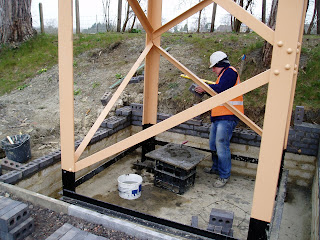 As part of the preparation for lifting the span, Clive carried on with the building of the retaining wall for platform 2 tower. When the span is in position and the levelling of it has been completed the tower legs, up to the bitumen paint, will be concreted in. This will bring up the base to finished platform level. 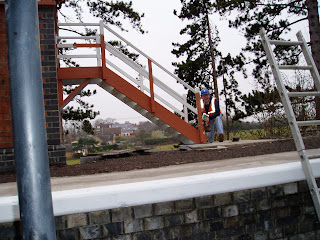 As always much more work was going on in various other places. Graham is seen putting the top coats on the signal box steps.
Later in the day the signal box was officially handed over to the Signal & Telegraph group so that they can set to in earnest with fitting it out, which I'm sure you will be able to follow on the S & T blog. 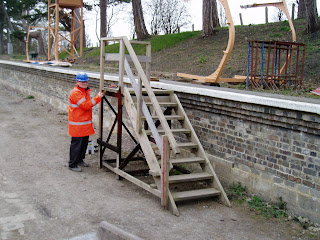 Meanwhile Mike gave the metal treads of the signal box steps a further coat of black paint. He then commenced to give the two sets of steps, used to access track bed level, a coat of preservative. 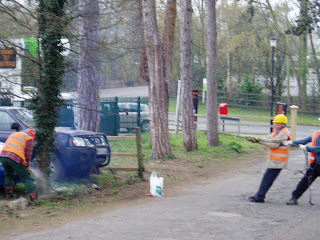 Down on the station access drive, Brian felled a tree, not a pine, that had self seeded many years ago. Peter H and Peter S are ensuring it falls the right way and watch out for any vehicles or pedestrians. When felled the tree was cut up and removed along with some old wooden fencing, which is being replaced. About three loads on our trusty dumper. We try and keep the drive as tidy as possible as it is the access to several houses. 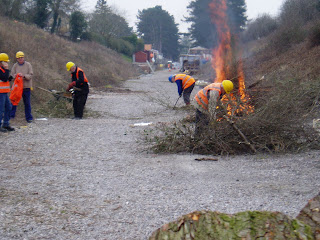 At the eastern end of the site a group including Terry, Pat, Ian, Peter, Vic and Rod carried on with clearing the cutting. Mainly this was recovering growth already cut. The fire soon consumed the wood removed from the drive and the clearings from the cutting. 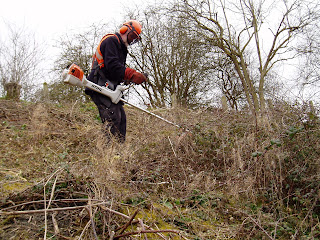 Ian seen with the brush cutter attacking some of the remaining brambles. This job will be ongoing, trying to keep the new growth under control. 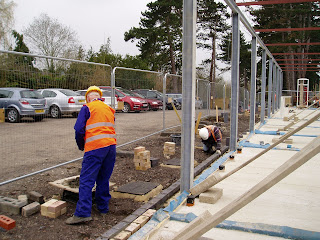 Of course work was also going on, on the station building. Some extra ballast was tipped and levelled where the drainage had been laid to make it better for the bricklayers. Tony and Bob laying the brickwork to bring it up to damp course level. Paul our mortar mixer and deliverer, about his business keeping four brickies happy. Not an easy task, he has to keep putting his cup down. 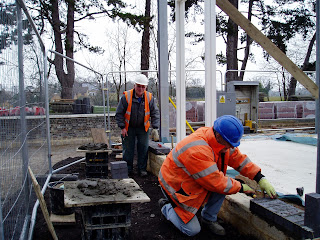 John C and John S at the other end, again laying up to damp course level. I believe we then have to have a visit from our friendly building inspector before we continue. 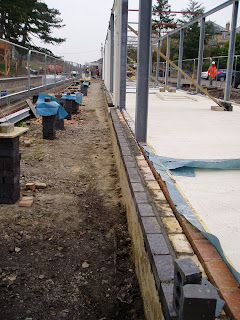 The final two pictures were taken at the end of the day.
This one tries to show the front of the building with all the door frames in position and the brickwork up to damp course level. After damp course there will be three courses of blues, then plinth headers and the wall becomes nine inch and red. 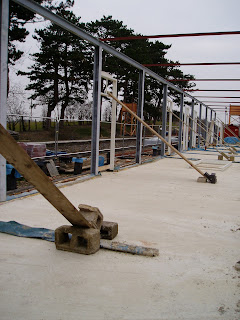 The final view looking from inside towards the platform.
Another good day with lots achieved by the twenty nine volunteers on site today.
Posted by BAGBLOG at 23:01