Probably the best day of the year so far weather wise but proceedings started rather slowly today for the 13 of us signed in. Some hard work was anticipated but until the materials were to hand other small but useful jobs were tackled first.


One of these "other jobs", that turned out to be not so small, was the dismantling of the platform end ramps that were removed on Wednesday. 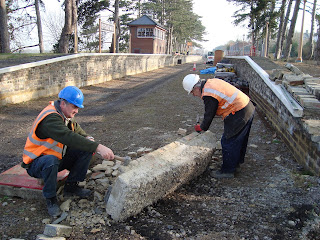 Dave and Robin started the process by carefully removing, with the aid of a lump hammer and bolster chisel, the red bricks and the blue bricks that had been used to build the wall in the first place. The aim is to clean the bricks, for the second time, and reuse them when the wall is re-built. As can be seen our well known brickcleaner, Robin, was on hand not only to oversee the process but also to give everyone a chance to pull his leg a bit about a resurgence in brick cleaning which I'm sure he appreciated. 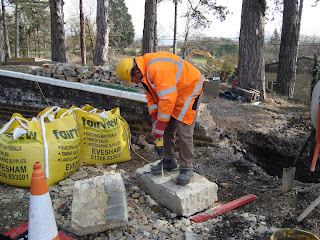 Stage 2, once the bricks were gone, break up the concrete. Peter K stepped to the fore and carried out his suggestion of drilling a line of holes across the concrete. The theory being that this would weaken the concrete enough for some cold chisels to be driven into it to split it 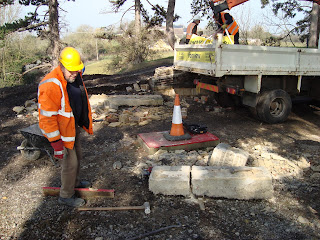 It did work but the first lump of concrete so tackled proved exceedingly difficult so much so that some of the tools got stuck in the lump. This caused much scratching of heads (difficult when wearing a hard hat) but a solution came with the decision to put a bit more wellie in to the sledgehammer and "voila!". 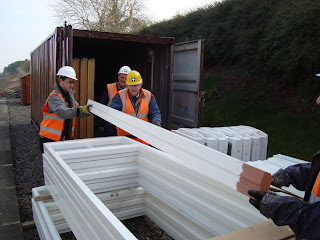 Meanwhile, the painters (l to r, Peter S, Keith S, Mike S & Brian T) had decided that some re-arrangement of the stock should be the order of the day. The reasoning being that the door frames would be needed before the window frames when the station building gets off the ground, so to speak, so they were replaced in the store with that in mind. 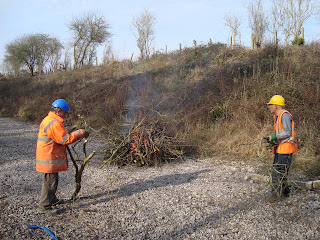 Steve and Vic continued with burning of the brushwood and had a good morning in the dry conditions and actually caught up with the available branches until the strimmers get to work on the brambles etc. 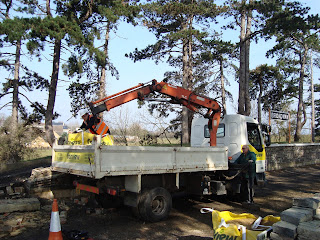 What we had been waiting for.... a delivery of concreting ballast from Fairview. 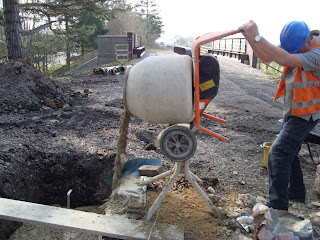 We could now get stuck in to the main event, mixing 2 tonnes of concrete to re-make the foundations for the last 6 feet of the platform ramp on the down side. The target is to fill the hole up to the top of the metal stake at the far end, this would match the depth of concrete on the main part of the ramp. Many mixes took place and many photos taken but all very similar. Dave is pouring the latest mix into the hole when we were about a quarter of the way up the stake. 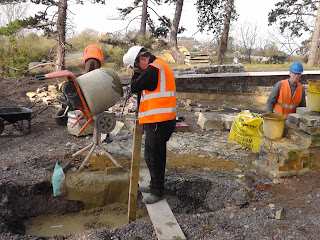 Despite appearances Peter has not fallen asleep on the job, he is working the concrete to ensure that no air pockets are trapped in the mixture and also to move it from the tipping point to where its needed. Its nearly up to the top of the stake at this point so the end is in sight
﻿﻿ 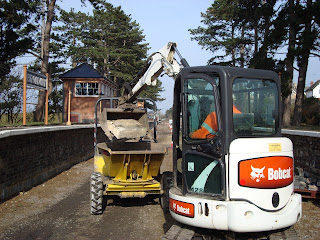 Construction manager, John C, called in after lunch to check progress and stayed long enough to do a couple of jobs. The first was to load the lumps of concrete from the old foundations on to the dumper so that they could be transported down to the car park site where there is some ground to be made up. 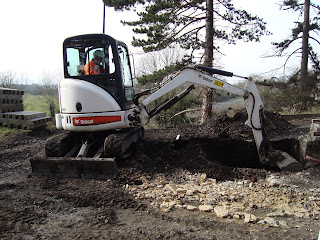 Next was the digging out of ballast etc for a new foundation on the opposite side platform ramp. This is now ready for when materials and labour are available to complete. A very satisfying day!