16 of us got out of bed early this morning so that we could experience the sensation of losing the feeling in our fingers due to the cold. After a couple of hours things gradually improved and the afternoon turned out to be very pleasant.

Top priority for the day was cleaning up after the shotblaster's second visit, every other job took second place until this had been completed. 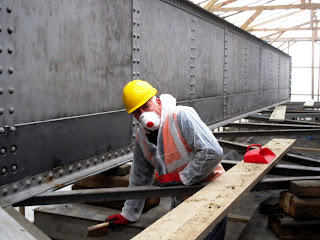 Peter Q, along with all hands on site at 8 a.m., went into the breach, got stuck into it, and did a splendid job finishing much earlier than expected (wonder if Pete's wife knew that he was very adept with a dust pan and brush. She does now!) 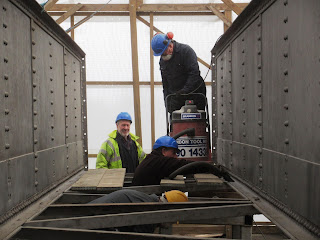 John B, I.C. bridges, on his tour of inspection when the lads were just applying the finishing touches. Brian has his hand on the vac while Steve is operating the business end. Robin, Graham, John B, Peter K, Dave and Peter S also joined the throng and did their bit to complete this thoroughly unpleasant job.
The effect of the blasting on the bridge can be plainly seen. Now that this part of the operation is complete the welders need to make a brief visit for some extra welding before the painters get stuck in next week with the aim of getting a couple of coats of primer before next weekend. 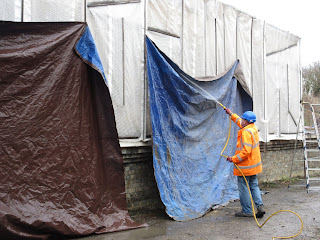 To give the painters the best possible conditions in the tent next week the tarpaulins, which had been used to collect the resultant debris from the blasting, had the rubbish swept off and placed in bins then were hosed down to minimise the possibility of getting dust on the paint. Jim H is the one entrusted with the vital job of directing the jet of water onto the blue sheet having already done the biz on the brown backed sheet on the left. 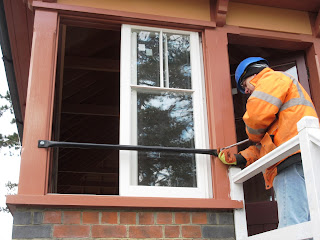 John and Jo spent most of the morning fixing the remaining bars to the signal box window frames, part of the process of putting the finishing touches to the box before handing over to S & T. 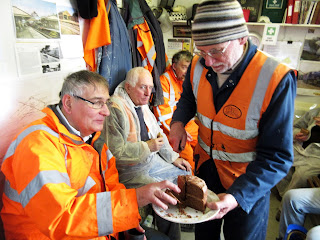 Lunchtime in the messroom with John B handing out the cake, not quite sure at the time what the celebration was but we all felt that we should take our slice just in case we found out later what is was all for. This John B was not the one who bought it but was just being waiter for the occasion as the other John B (the bridgeman) was the one who bought it either to celebrate the latest milestone reached on his project or maybe thanks to the crew working on it. 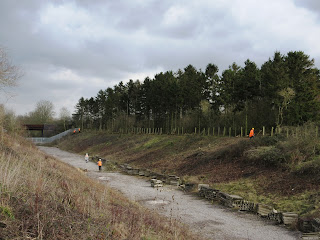 During the second half of the day the spare bodies made their way along the track bed to the area north of the station and continued with the job of clearing the cutting sides of the hawthorn and brush that has been cut down, much done but still a bit more to do. 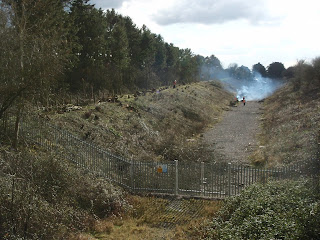 A photo from an unusual location. This is looking south towards Toddington from Springfield Lane bridge, the Broadway station site is hidden by the smoke from the bonfire. The GWSR own the land as far as the security fencing in the foreground.

Must mention Jim B in the bric-a-brac shed, brilliant day Jim!

During the afternoon we had a visit from one of our supporters who had been sorting through the effects of his late father. His father was Gloucester, Barnwood, driver Tom Toohig. Tom had been the last Barnwood footplateman to be promoted to driver before the shed closed and luckily for us had taken just a few pictures of our line after being transferred to Horton Road shed. Tom's son, Andrew, has donated the pictures to us and one is reproduced below. Andrew also donated two Toddington signal box train registers from 1964 which have some fascinating entries. These will be given to the museum at Toddington. Thank you Andrew. 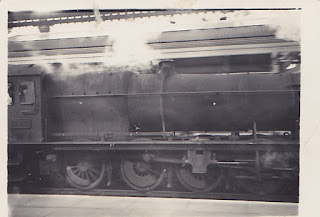 GW 2-8-0 No. 3831, believed to be passing Broadway sometime after 1963 which was when Tom was transferred to the Western shed.