Well, yes it did rain today. We put up some stern resistance, during the morning, when the rain was absolutely belting down and some of the 17 volunteers peeled off early, the rest of us called it a day at lunch time. It is fair to say that some people's waterproof clothing did not quite live up to expectations and the wet shirts were not just perspiration!

There were two jobs that were "must do's", regardless of the weather, and these were the only jobs that were tackled, hence a fairly brief report today. The first task was to clear out the locking room of the signal box. 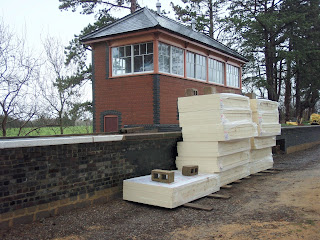 The locking room has been used as a temporary storeroom for some building materials, notably the 100 mm insulation for the station building footings. There were other items too, like scaffold boards, but the insulation swallowed almost all the room so had to be out before Monday when electricians move in to put the mains in the 'box. This material seems as light as a feather when lifting one sheet but in bundles of 4 on a cold wet day it is a different story. 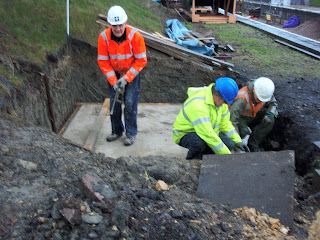 The other job was to remove the shuttering from the footbridge tower foundations which, like the insulation, proved to be exceedingly tricky. Mud everywhere, rain lashing down, difficulty in getting a grip on the wood and a confined working space all make it taxing job but the lads stuck at it and were successful around mid-morning. 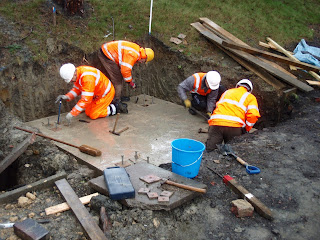 This led to another difficult operation, removing the cones that had kept the fixing bolts in place during the concrete pour. The cones were fitted to give the fixing bolts a little bit of movement in the concrete, now that it's gone off, to assist in the erection of the towers. The wooden cones have to be removed so that the bolts can be grouted after the towers are bolted down. Heavy overnight rain meant that funnel shape, that the cones had made, around the bolts had become full of water which had caused that plywood cones to swell. It was extremely hard and very tricky to get these out in one piece, some did, some didn't. Those that didn't will have to be re-visited on Monday. 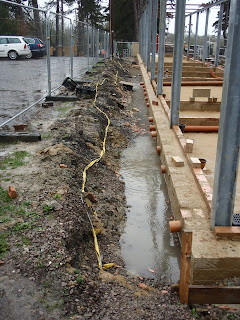 The final view for today, a moat forming around the station building sometime in late morning