A Very Fine Day In More Ways Than One

After the very poor weather experienced over the weekend today at Broadway we were fortunate in having a dry and mostly sunny day. This set the tone for what was to be a most successful day for the 38 volunteers on site. This has to be most ever on one day!

There were two very significant tasks on the "to do" today, the first one was erecting the footbridge towers. A large crane was on site by 8 o'clock together with staff from the steel fabricators who made the new towers for us. 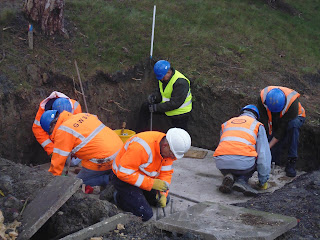 The first task was to clear out the sockets that hold the fixing bolts so the there a little "wriggle room" to help locating the bolts into the fixing plate. Here the crew are working on the bolts on platform 2. A similar crew worked on
platform 1. 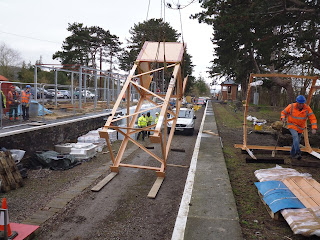 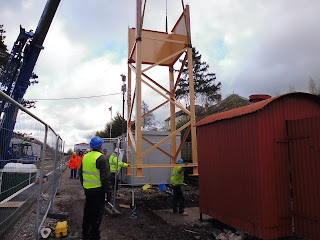 The tower is gently positioned on platform 1.
The crane driver was extremely professional in moving the tower in what was a very confined space. 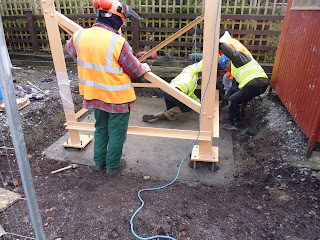 The tower being positioned onto the bolts. The very careful measurements that John B and John C made proved to be spot on on and the fixing bolts were soon in place through the baseplates. 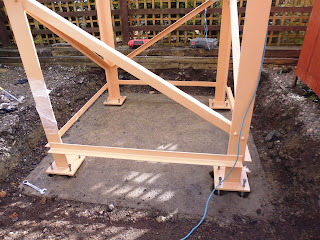 The tower sits perfectly in place and its right hand edge can now just be seen on the view from the security carmera.

Before work could commence on platform 2 some lower branches on the pine trees had to be trimmed off which Brian and Roger J did skillfully with their chainsaws. Once it was decided that there was now sufficient clearance for the tower on platform 2 the lifting process was again set in motion. This tower had been stowed for some while on the platform which meant it had to be lifted over the electrical cable that crosses the track bed, The crane driver showed great skill in achieving this difficult manoeuvre.. 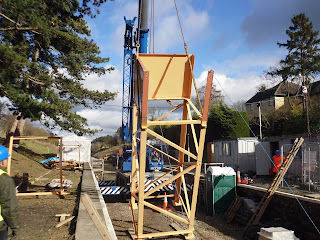 The tower safely over the cable and being lifted into place. 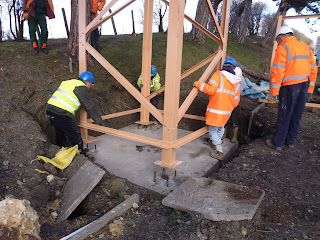 The plates being positioned over the bolts. 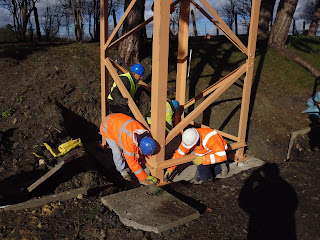 Once again the bolts fitted perfectly, the nuts are being tighten up and another brilliant job done. 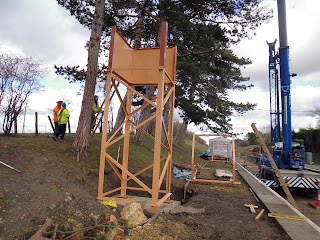 Tower on platform 2 now safely in place.
The whole team are to be congratulated on a great job well done, We also wish to thank the crane driver from Ellis Crane Hire and the crew from the steel fabricators for your help and expertise today. 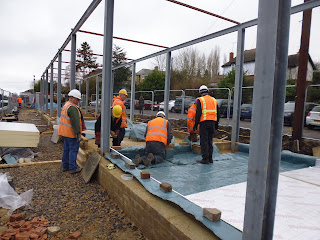 The next big job being undertaken today was laying the insulation layer on the station building floor. Firstly a plastic membrane is laid over the smooth and levelled sand screed. The insulation material is then inserted and cut to size as necessary. The team of Tony, Steve, Paul, Clive, John S and Ian led by John C and Bob W are seen here fitting the next section on the membrane. 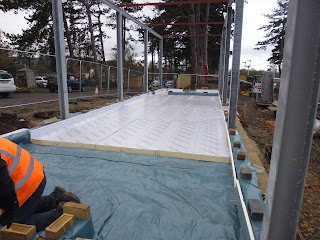 A view  of the insulation in place and a further section membrane being fitted. 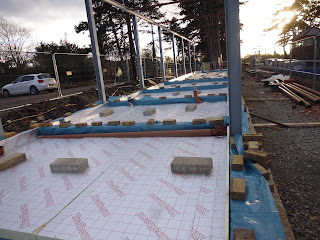 At close of play three quarters of the floor area had been covered with the insulation material. Once the whole area has been covered 4 inches of concrete will be added.. A final screed will be added later to bring the floor level up to platform height. The team are to be congratulated on yet another brilliant day's work. 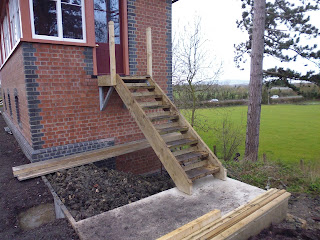 Peter Q our master carpenter and ably assisted by Dave H were tasked with fitting the hand rails and pillars to the signal box steps. The above photo shows the steps first thing in the morning, 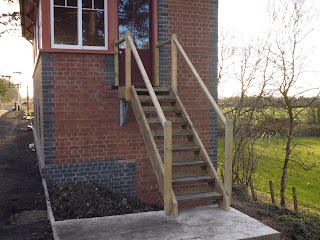 The pillars and hand rail now in place. Although there is still a bit to do this really finishes off the signal box a treat. 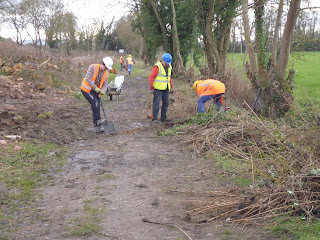 Down in the car park the drainage team led by Rod and Terry continued with the clearance of the ditch which runs the whole length of the area designated for it. Here the team are digging a gully to drain water from the footpath. 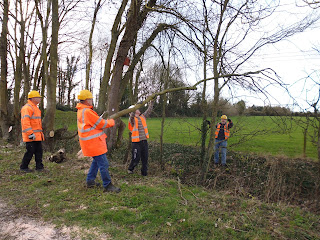 Further down the path the team tackle more branches that overhang it. Brian and Roger J were on hand with their chainsaws to cut back many branches and small trees. A big bonfire will be on the cards as soon as weather conditions allow. 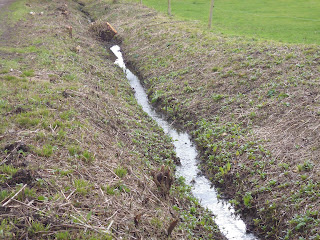 A section of cleared ditch. The whole length will look like this soon..


At the eastern side of the cutting north of the station area the team of Dave B, Keith and Roger continued their work in clearing this area of saplings and undergrowth. A fuller report on this valuable work will be given in next week's blog,
Julie manned the bric-a brac stall in her usual efficient and cheerful way and Mike S was seen doing some sign writing on a new notice board.


It was indeed a fine day all round.