A cold but dry morning, with a lazy wind, greeted the volunteers, 27 in all. 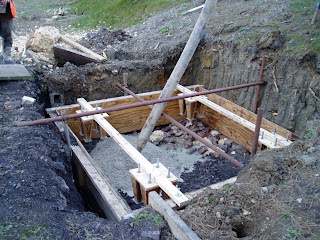 Some of the lads were at it by eight this morning, with an early arrival of a concrete pump and load of concrete. This was for the footings for the footbridge tower on platform 2, the start of the pour controlled by the pump operator with a remote control unit. 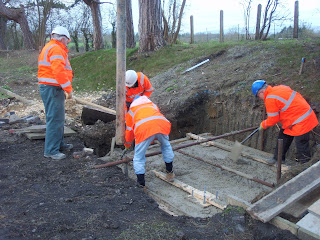 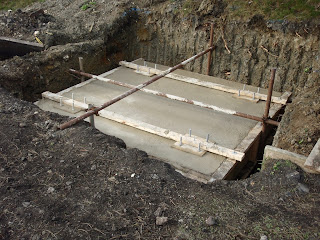 Later on the job was all tamped and levelled. We shall probably have to have some sort of retaining wall at the back to keep the side of the cutting in place. 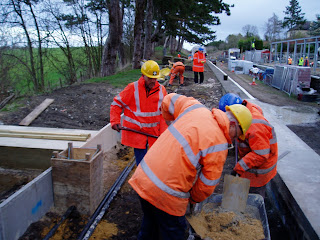 By the signal box the job was to bed and cover the ducting, laid Monday, with sand prior to the next level of infill. This protects the ducting, which will carry the lighting cables back to the signal box, from any sharp edges in the infill. Tony, Terry and Steve are adding some dry ballast to the remains of the concrete
from the earlier load. A dry mix is needed to pile against the lamp post box as the infill level is raised. When it's dry enough the box is removed leaving a concrete socket in which to set the lamp post 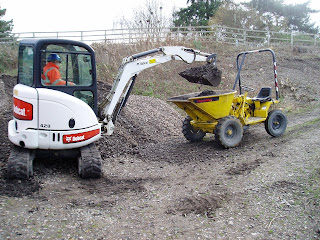 The infill, in this instance, is spent ballast from where the track is being relaid at Winchcombe station. Steve using Bobcat to load the dumper driven by Jo, just out of shot acting as banksman for the digger as it is near a path used by the public. 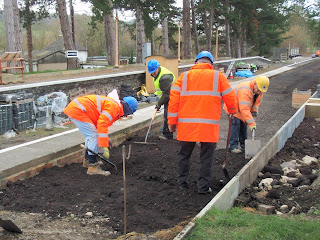 A load of infill delivered is being shovelled and raked by Graham, Mike, Terry and Ray.
As you can see the back of the slabs are being filled at the same time to keep an equal pressure on both sides. 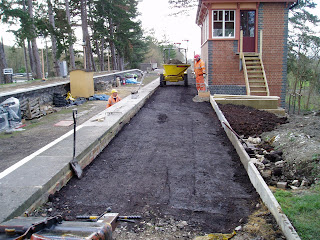 Later on Jo waits for the crew to return, from break, with a load for the back of the slabs. The dumper bucket already turned 90 degrees, a useful feature on our old stalwart, which enables an easy tip where you want it.
This picture also shows the concrete foundation block, for the signal box steps, now finished at platform level forming a path to the steps. The steps made by John C have been fitted. The newel posts and handrails have still to be fitted. 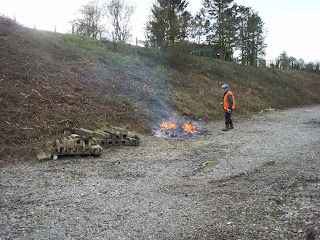 Towards the Honeybourne end of the site Vic, out of shot at the top of the cutting and Chris, tending the fire, carried on with the clearance of the fence line and cutting. 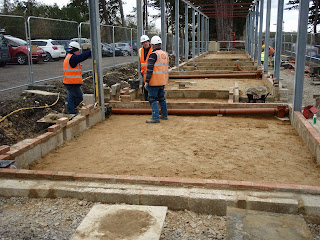 Work on the station today centred on the drainage pipes for the toilets being laid out and cemented into the blockwork. This needs to be done before the membrane and insulation can be laid prior to concreting the oversite. Paul, Bob and Clive discussing the layout. 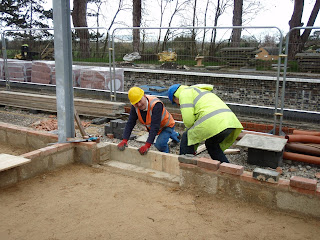 Further preparation being done by Peter and Dave. They are fitting shuttering at the doorways so that the floor slab is continuous through the doorway. 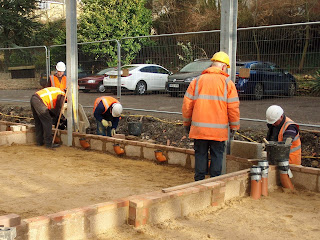 Peter, Clive, Paul, Bob and Tony making good progress in what will be the Ladies Toilets. You can see the 90 degree bends, that will connect to each toilet cubicle, being cemented into the blockwork. 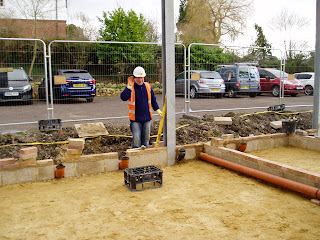 I said, "Have you finished Clive". 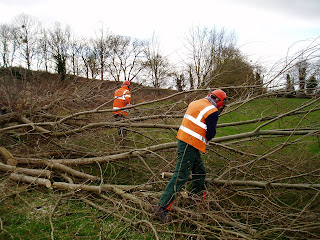 The other big job today was the removal of more of the willow trees from the car park area.
This needed the permission of our neighbouring farmer to turn his electric fence off for a while so we could lay the fence down. The trees would have to fall on his land because of the lean on them. We promised not to let his cattle escape and would clear the timber and re erect the fence as soon as possible. Our thanks for his cooperation.
One large tree down, Brian and Roger cutting the remains to a managable size to carry back to railway land for disposal. 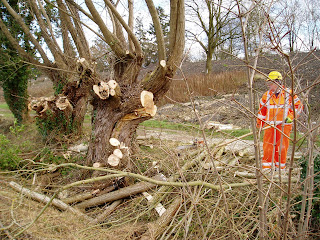 Another good day with lots achieved.
Posted by BAGBLOG at 21:42