A slightly quiet period at the moment while we prepare for the next phases on the station building and the footbridge although the need to clear as much of the cutting sides as possible before the end of the month kept many of the 16 volunteers occupied. 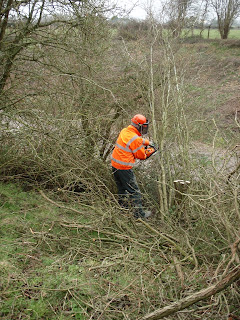 Jo took the early shift on the chainsaw today while waiting for Roger to exit a car park planning meeting.

The view below gives some idea of what has been achieved so far, its surprising, maybe, that there is still far too much along the remaining cutting side, up to our Springfield Lane boundary, to clear this winter. Peter K is following up after the chainsaw with the bow saw and loppers to reduce the arisings to a manageable size before transfer to the growing bonfire down on the trackbed. 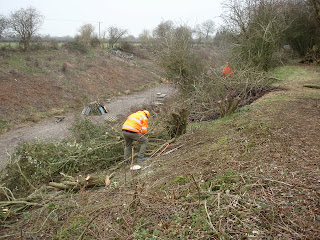 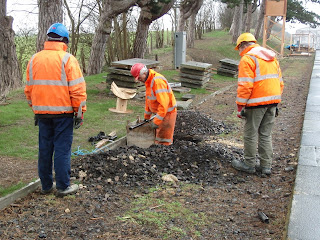 After being relieved on the chainsaw Jo, in the pit, turned his attention to the next in the line of lamppost bases on platform 2. This is number 6.
Although it looks like he has an audience this is a bit misleading, Jo is just sizing up the job before we burst into action fixing the ducting in place and mixing several barrow loads of concrete to place around the shuttering which is sitting in the hole. 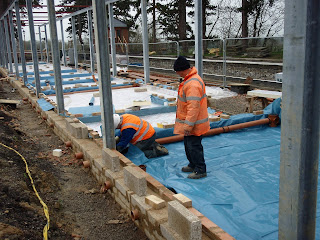 John and Tony spent the day cutting and fitting the damp proof course and 100 mm insulation in the remaining rooms on the main building.

The way is now clear to order the concrete pour for the floor and this will go ahead as soon as possible but, unfortunately, the weather in for the coming week this part of the world is not predicted to be quite warm enough to allow the operation to go ahead with confidence, so it may be the following week before we get there. 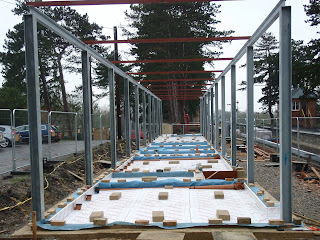 A good view of the main building with all in place. The concrete blocks are just a temporary measure to prevent the insulation being disturbed by any strong winds. When the concrete is eventually poured it will be 100 mm thick. 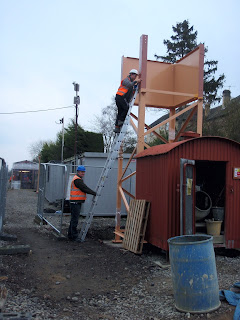 This is the footbridge tower on the down platform, some masking tape had been applied to the tower during transportation and installation to try to prevent paint damage as much as possible. Masking tape no longer required Peter is up the ladder removing it while Dave is footing the ladder.
Work is due to start on the main span in the next few days so Jim, Chris, Dave, Peter and Steve spent a couple of hours cleaning out the footbridge tent and other accumulated items around it on platform 2. Initially the work will focus on some localised shotblasting. 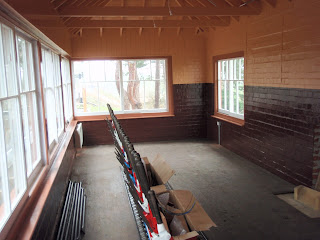 Signal box update. Electrical contractors have been on site during the past week installing the 240v supply. Some of their work can be seen here, a double socket in the far right hand corner and a wall heater in the left hand corner. There are also, of course, various lights and sockets in the locking room. 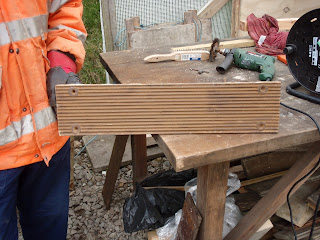 The cast iron step treads, pictured here, for the signal box stairs have had some attention today, taking off the loose rust. We currently have just 5 of the these step treads which means we are a few short of what is needed, another 8 or 9 would certainly help. If you have any that you could donate or be willing to sell for a reasonable price we would like to hear from you.