A couple of volunteers attended the annual pre-season Heads of Departments meeting at Winchcombe today which made for a slow start in some areas at Broadway, particularly on the main building where only one brickie was in action. Another brickie may even have gone to watch his favourite football team rather than spend the day at Broadway, amazing! Still 14 others soldiered on until the cavalry returned from Winchcombe just before lunch (this might elicit a comment from some workmates)! 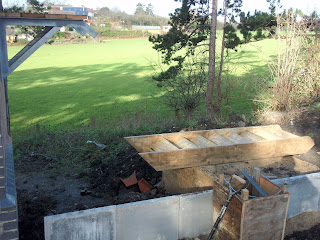 The partially complete signal box steps were delivered early doors courtesy of the railway's construction manager, John C, who had made them in his workshop between working visits to Broadway. More work is planned on the steps on Monday when the upwards extension to the concrete landing, to provide the wearing surface, is on the agenda. 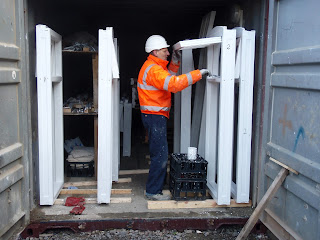 Keith S was putting himself about today by starting off in the relative sanctuary of container 3 applying the second coat of primer to the window frames. This obviously paid off as he seems to have gained an extra stripe on his right arm which probably qualified him to move on to the next job.. 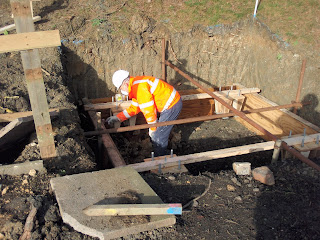 ..of painting the mould oil onto the inside of the shuttering for the second footbridge tower foundation. This one has a bit more holding it together, lessons were learned (as they seem to say these days) from last time. All being well this should be full of concrete by close of play on Wednesday. 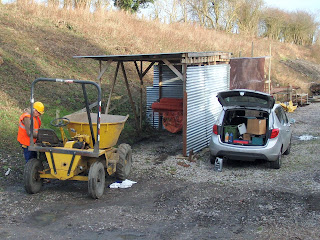 The dumper must think that it is having all its birthdays rolled into one. Pat is giving it some well earned TLC. In addition to a service it had a power wash, hasn't been this clean since it was new or perhaps when it was left out in a thunderstorm.
It has been a real workhorse over the years so hopefully this will encourage it to keep going for a few years more. 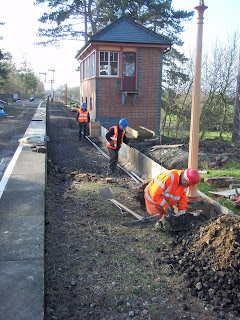 Jo and Steve, with Jim B observing in the background, start to dig out the base of one of the two remaining corporation type lampposts on platform 2. These will be replaced with reproduction GWR No.1 lampposts when we have received them.
Jim went on to better things after this to have an exceptional day in the bric-a-bric shed. 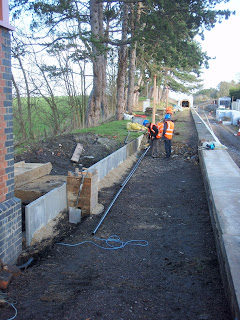 In this view the extra lamppost socket near the signal box can be seen, this matches one in a similar position on the other side of the box. When the post is out, the 50 mm ducting lying on the ground, will be positioned again to run between post and signal box. The blue nylon cord entering the near end of the duct is being used as a drawstring. The previous drawstring, made from the same material, had provided breakfast for the local rodent population. 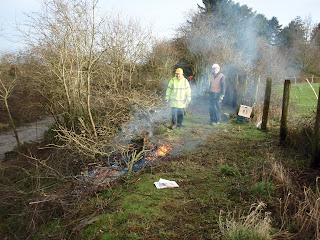 The usual group of pyromaniacs had gathered on the eastern side cutting at the north end. A little more success was evident today as compared with previous weeks. Vic and Robin are watching the fire, daring it to go out, while Roger J, just seen in the distance, took the opportunity to put his chainsaw training into practice ably supported by Jim H. 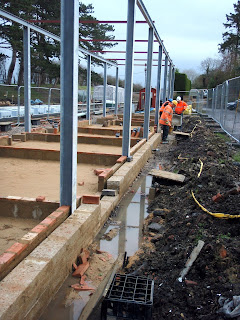 Yesterday's heavy rain at Broadway delayed the start for a while today while some of the surplus water drained away. Tony is getting his 'spot' set up for the day's endeavours while behind him Keith and Steve are filling the cavity between the inner and outer blocks with concrete. 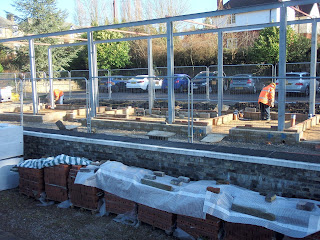 Tony started by laying the few remaining blocks to go in assisted by Ray making a return, after a couple of years, from one of our former colonies. 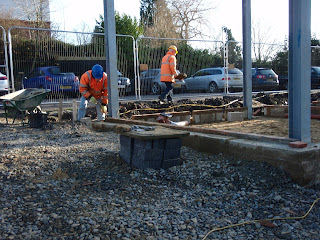 After scraping the barrow, not the barrel in this case, the last of the day's mortar is eked out. There was just enough to complete the split bricks along the top of the inner line of blocks. A bit more work will be needed on these blockwork sections when the ducting and pipework is built in following the visit of the building inspector which maybe in the coming week.