Today's 10 volunteers were expecting the weather to force them into the mess room for long periods but it turned out not to be the case and they achieved more that they expected.


Work proceeds on the preparation for the second footbridge tower foundation. 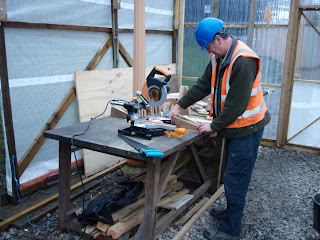 Problems were encountered during the concrete pour for the first tower when the material used to keep the fixing bolts in place and prevent them being pushed out of vertical proved to be less than satisfactory. A more traditional and sturdy method is being used for the next foundation. This time the cones are being made from wood by Dave in our carpentry dept. so shouldn't collapse this time. 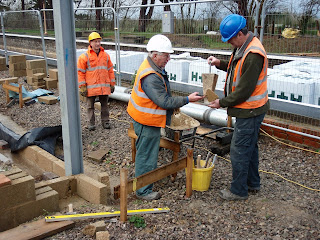 Dave is offering up the prototype cone for acceptance by John C and is being given some advice by John on the finer points, which must have been beneficial because later.............. 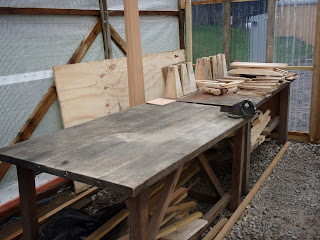 .............eight of the required 16 cones stand at the right hand end of the bench in the carpentry shelter waiting for the call to duty. 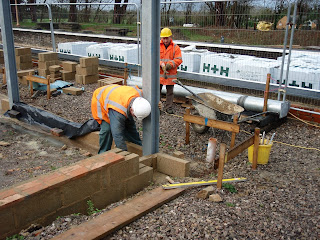 As can be seen from the earlier photo block laying was possible today, although John C was the only member of the bricklaying team on site today some progress was made early in the day and again later in the afternoon. John was assisted by Steve and Robin today, Steve on the mixer and Robin trimming the stanchion fixing bolts where they interfere with the blockwork. 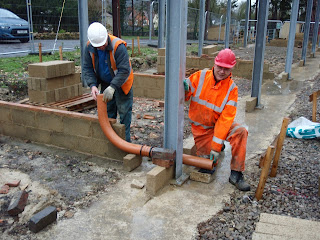 The lull in the block laying was to allow John and Jo to spend time carefully working out where the cable ducts will need to go from the centre storeroom where the main electrical supply will be installed. 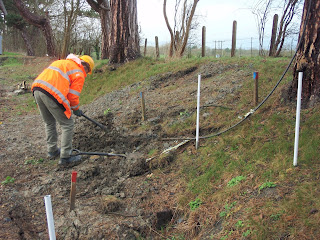 Elsewhere on the site Peter started to dig out the electricity cable which runs from the location cabinet on platform 2 to the messroom. The cable needs to be moved because in its present location it is in the way of the second footbridge foundation. 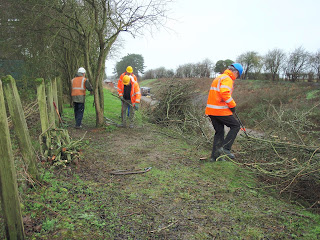 Roger was later joined by Keith, Peter (after the dig out, above) and Robin to cut up and trim the arisings from the top of the east side cutting, which is to the north of the station, and prepared it for a future bonfire, assuming the rain stops at some point!!
Posted by Unknown at 23:15