Ten volunteers were on site today but storm Frank did its' best to disrupt the activities. It was very windy all day but fortunately it was dry in the morning but by lunch time the heavens opened and all work had to stop. However another important milestone at Broadway was achieved - the first foundation blocks between the stanchions were laid. 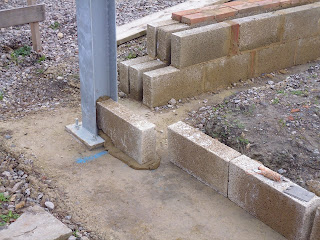 Bob W aided by Jo on the mixer laid the first concrete foundation block between the stanchion. This is the first of many to be laid to build the foundation courses. When this is competed the area in between will be filled with grade 2 hardcore and finally the concrete and insulation layers. The blocks in the rear of the picture are for the end wall of the station building. 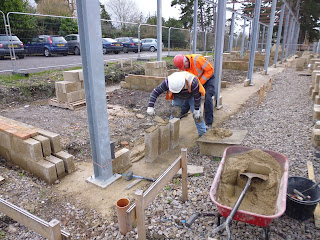 The next 2 blocks are prepared for laying with mortar being applied to one end. By lunch time a complete row was laid and the work fortunately covered with polythene sheeting. Soon afterwards we had torrential rain and no further block laying was possible.. 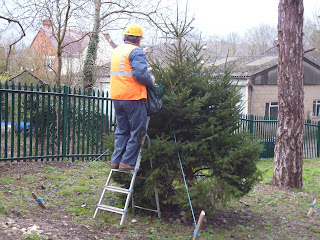 Owing to the severe weather forecast for later in the day Mike decided it was wise to remove the baubles and lights from the Christmas tree which has been a fine feature over the festive period at Broadway. The tree is rooted so we are hoping it will grow and become a permanent feature in the driveway. 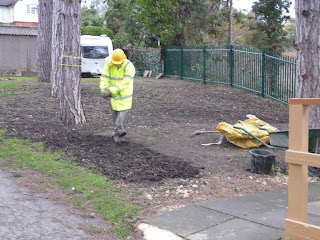 Vic has worked tirelessly over the recent weeks in preparing the area at the top of the driveway which we hope will become a picnic area for our visitors. It will be seeded in the spring. 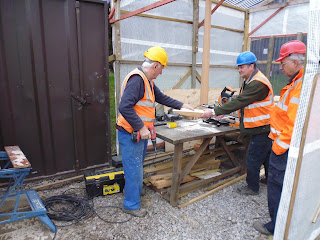 Peter Q and Dave, with Jo watching on, preparing a former for the window frames. These will allow the decorative brickwork to be built over the frames. 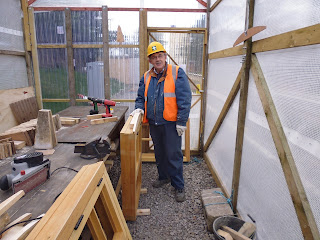 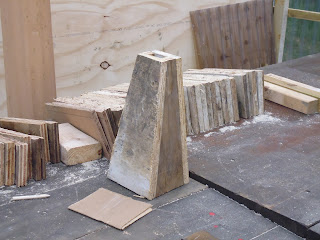 Peter Q and his team have been tasked with making cones which will surround the fixing bolts installed in the concrete foundation for the footbridge tower on platform 2. A total of 16 are required and this is the first one off the production line.


Down in the car park area work continued on clearing the stream and the embankments. Seen here looking south is the cleared steam with the water flowing freely 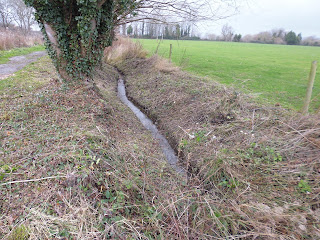 The picture below looking north gives a good idea of the state of the stream and embankment prior to clearance
Rod is on the powerful strimmer and Peter is clearing up the foliage which has been cut down. 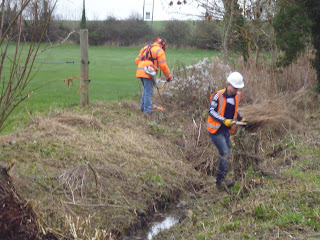 Although we only managed to work to lunchtime a lot was achieved today in very difficult working conditions.

The Broadway blog team of John S, Rod, Dave H and Peter H would like to thank  all our followers & readers for their interest and kind support over the past few months. We wish you all a very happy and prosperous New Year and we look forward to bringing you more exciting news from  the Broadway Project during 2016.