Yes is the answer; the majority of the Monday gang turned up today, either refreshed after their Christmas break or glad to be back to normality, so there was a concerted effort to crack on with the station building construction. 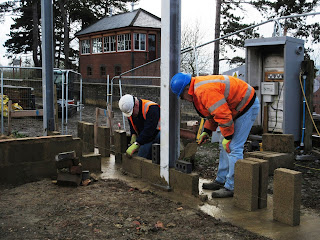 Four brick/blocklayers were on site along with Jo mixing it with the sand and cement. Clive and John S were given the job of setting out and laying the first row of blocks working towards the southwest corner of the building. Intermittent rain was forecast during the day and it did appear from time to time but only once was it heavy enough to bring work to a halt. 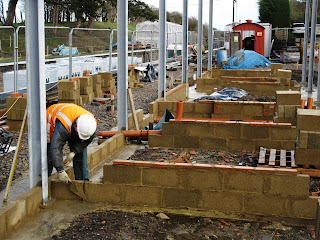 John C started the day laying the second course of blocks on the first course laid on Saturday, seen towards the far end and later followed on behind Clive and John S extending the internal walls to connect to the outside walls. 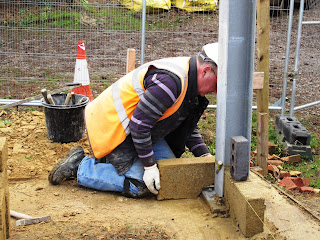 Bob W, who had given us such a good start by chopping out all the blocks needed to fit over the stanchion base plates along the platform side has some more of the same to start the day. After chopping out a couple of these the job rapidly looses its appeal, we know this because Bob very sportingly gave someone else the opportunity to chop out the blocks to fit over the drive side stanchion plates. 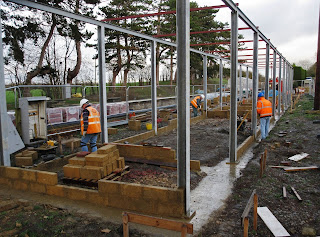 The work went so well during the day that a start was able to be made on the walls nearest the station drive. This side is a bit more restricted and muddier that the platform side so has tended to be the poor relation. After a deal of cleaning and sweeping of the concrete base the first row of blocks were laid in 3 of the bays along the side of the refreshment room. Bob W is seen contemplating what the next step should be. 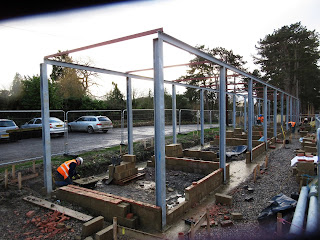 Near the end of the day this view gives a very good indication of the progress made today. The places on the right hand side where only one row of blocks has been laid is where the doorways will be installed. This is the north end of the building showing the gent's toilet nearest, followed by the disabled and the ladies. 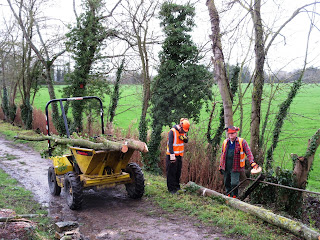 Two members of the Monday gang not to be forgotten are Peter and Brian. Brian is the most proficient of our qualified chainsaw operators so spent the day, with Peter's help, clearing some of the trees in the car park earmarked for removal. The wood was moved to the station site to provide material for a forthcoming chainsaw course.