Yet another busy day, and a good day for slabbing!

A overcast but bright sky greeted the 24 volunteers today, work on the station building was briefly on hold due to the fantastic efforts of the team on Monday. But there was still plenty to do. 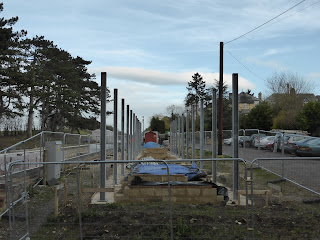 Here we can see the station building with all the stanchions erected. Next week, with the aid of a small crane, we are planning to start the installation of the ring beam. 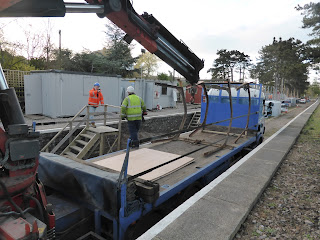 Early in the morning we had the arrival of Vic Haines' lorry to take the bridge hoops and templates away to the manufacturer of the footbridge towers. The driver is seen talking to John Balderstone before getting ready for the off .


Today, most of the action happened around the signal box . 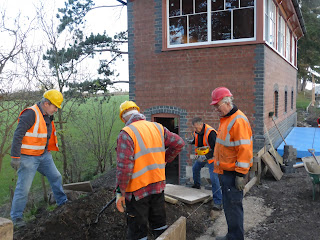 Here we Rod and Terry, with Jo and Brian installing the slabs for the rear of the platform. 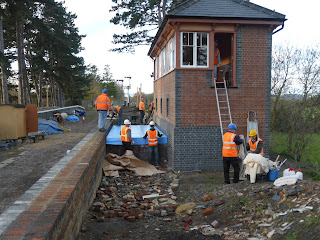 Meanwhile, Paul and Pete under the supervision of John C were applying a waterproof membrane over the signal box tunnel. This will provide some protection to the concrete when a layer of sand and hardcore is placed on top.

Also seen in the picture is Mike and Pete emptying the signal box of the dust sheets, upstairs Graham has almost finished painting the inside of box. It will soon be ready for the new "tenants" ? due in the new year.

Later in the day the membrane had been fixed and Brian had the exciting job of putting a layer of sand on it, he did have to put up with several witty comments! 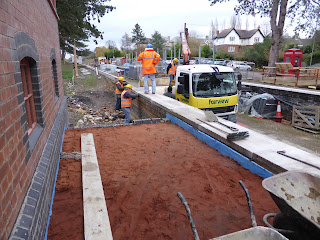 Mid morning saw the arrival of the Fairview lorry complete with Hiab. This saw Rod and Terry`s team moving on to the laying of the Platform edging slabs. By the end of the day they had laid 12 of the longer slabs in position.
Only 3 or 4 to go and platform 2 slabbing could be complete! 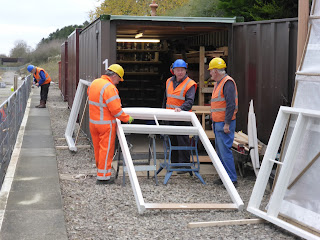 Meanwhile back on platform 1 the "Chippy team", lead by Pete, were fitting the formers onto the top of the door frames. This was followed by a coat of primer to blend them in with the door frames.
Completed, they were then stored back in container 3. 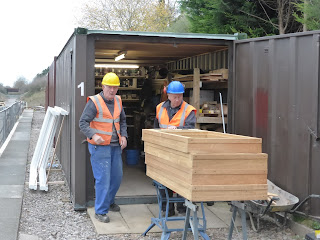 After the door frames the window frames! I don't know if by the look on Pete's face he knew how many he had to do! 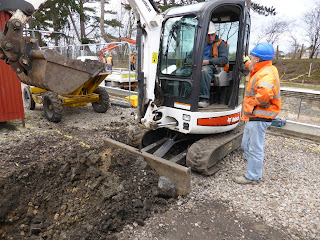 The two Johns discussing digging the hole into which the tower foundation shuttering is soon to be installed. Within the next week or so we may have the foundations in for the first of the footbridge towers!

Meanwhile, elsewhere, Steve looked after the shop and Vic dug a hole by the shop for a Christmas tree.

Posted by David Holdsworth at 10:07