A good day for earthworks 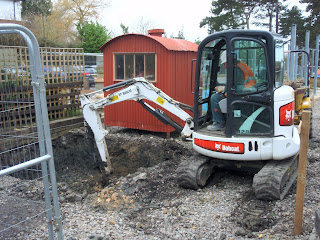 To make the most of the Bobcat digger, which has been on site for the last few days, work continued on the footings for one of the footbridge towers. This is the tower on the down side or main building side. In this view looking south John is carefully removing some spoil close to the edge of the hole before emptying into the dumper. The footings on the up side will have to wait until the platform backfill around the signal box has been completed. 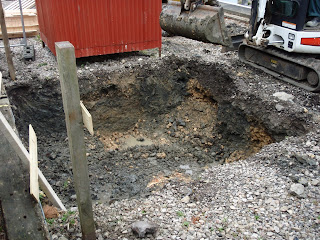 Although the hole excavated by the Bobcat was close on 2.5 metres square and 600 mm deep it was not enough to accommodate the shuttering in its correct position so Peter K, Keith and John had to revert to pick and shovel to grub out a 150 mm strip of surprising hard clay all along the back of the hole before the shuttering could sit pretty in the hole. Unfortunately the shuttering managed to avoid the camera at the end of the day but this should be rectified next time. 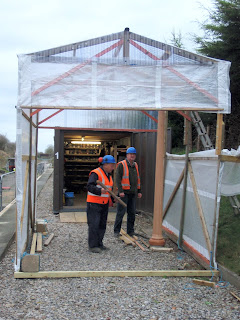 The brick shelter was badly damaged in some heavy weather a few weeks back and lost a couple of legs. It has been loitering near container one ever since waiting for the carpentry dept. to repair it. Brian and Dave took up the challenge today to make it ready for its new life as a woodworking workshop. At least the sawdust will be blown away fairly often. 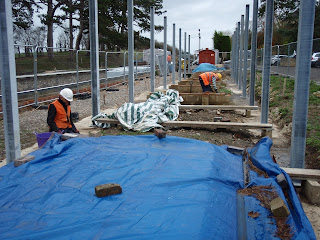 The open areas inside the footings for the main building have gradually taken on a green covering as the weeds have taken advantage of the newly uncovered soil to stake their claim. A group of five volunteers, Robin, Vic, Steve, Peter and Jim decided that, although it was never going to be the most exiting job in the world, it could not be put off any longer and got stuck in and cleared the whole footprint before lunch time. A brilliant job. 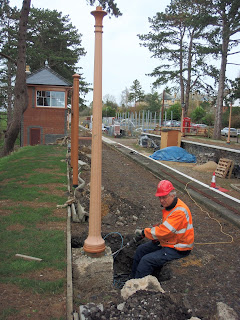 Jo and his team of Peter S, Peter K and Keith loosened the soil around the bases of two lampposts on platform 2 and disconnected them. A tentative start was also made on removing the concrete that they had been bedded into, cannot go too far with this until a means of lowering them to the ground is on hand. Maybe the Bobcat could do this before it goes back home. Its has been decided that these posts would be useful in the car park area, in the fullness of time, and that they will be replaced on the platform by two of the four Great Western posts that we have in stock. A third will be nearer the box. 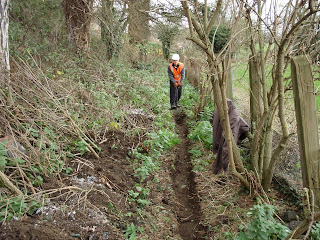 After helping Jo, Peter S and Keith moved to the rear of the signal box and continued the work started by Keith a few weeks ago to clear the drainage channel that takes away the surface water from the box guttering.

The bric-a-brac shed had to be covered in shifts today with Steve opening up to be relieved by John B for a couple of hours who in turn gave way to Jim. Activity was "light" today and has been for a few weeks recently, maybe something to do with the time of year. Well done guys for sticking with it.