Another incredibly warm December day but 10 volunteers is fewer than recent Saturdays, maybe the lure of Christmas shopping proved too much for some? 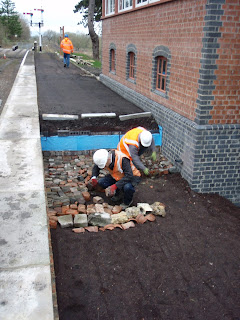 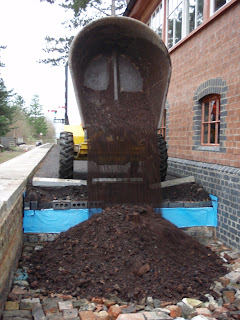 Backfilling behind the platform wall has progressed to the north end of the signal box after the section across the rodding tunnel was recently completed. Robin and Peter are laying a layer of hard core before the next delivery of ballast arrives. Great care was necessary on the dumper driver's part not only to prevent the dumper falling into the hole but also to prevent damage to the membrane when tipping. The banksman has moved out of shot behind the photographer while the tipping operation is taking place. 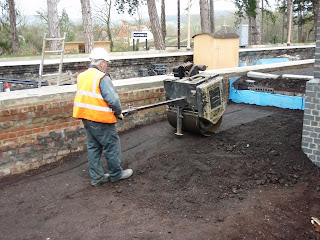 After the hardcore has been covered by ballast the next stage of the process it to compact and roll the latest layers. This is operation is carried out each time a additional layer of ballast goes down, John C is plant operator on this occasion. The unrolled section next to the signal box wall is to allow ducting to be installed running northwards from the signal box. 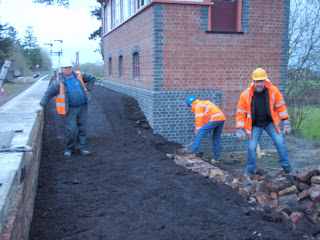 Almost at the end of the day and the backfilling had reached a stage where a mini digger could safely negotiate the slope. The need to provide access to this machine was the driving force behind the push to build up this area. The excavator is needed further along the platform to dig out the footings for the second footbridge tower and this route was the only option. Peter K brought his latest handiwork to Broadway today. Peter is a very skilled metalworker and fabricator and was asked by the construction manager to manufacture two fairly hefty brackets to support the landing at the top of the signal box steps 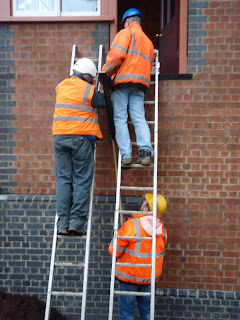 The reason that they were brought on site today in an unfinished state was to give an opportunity to mark where the fixing holes should be so that they can be drilled before galvanising and not after. John S and Peter are holding one of the brackets in position while John C marks the hole positions 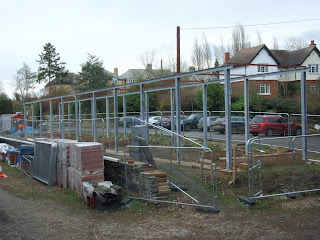 The stanchions on the platform side were aligned and adjusted today to level up the ringbeam. When the stanchions were installed they were provided with adjusting nuts above and below the base plates specifically to allow this adjustment to take place. 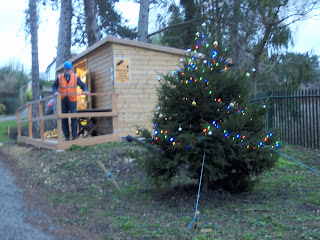 The view of the Christmas tree outside the bric a brac shed. Unfortunately the photo is not up to the photographer's usual standard. Is it the presence of a man with a white beard next to a Christmas tree that has given him a tingle of excitement all the way down to his shutter finger?
Posted by Unknown at 09:45