A good turn out of volunteers today again, on a strange December day. When we arrived on site it was already 13.5c, it rose to 15c during the day and a lot of us sat outside for lunch. Must be global warming! 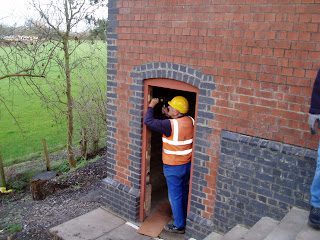 Anyway, a round up of what we got up to. Peter Q is adjusting the hinges on the locking room door before returning to his newly finished carpenters shelter where work continued on the woodwork for the station window and door frames. 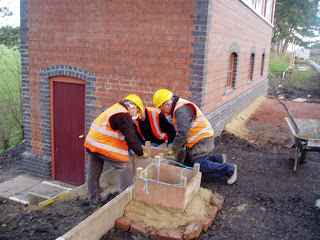 As seen in this picture the door is back where it should be.
Steve B checking the fit, with Terry and Peter H, of the slab he has just cut to finish the vertical slabs which finish off the steps. A tricky angle and the fact that a socket box needed to be sited in the same position made it a bit awkward. The socket is for the hanging post, for the gate at the top of the steps, which will be in the spear fencing erected along the back of the platform to protect the public from the steep embankment.
In the foreground is the socket box for a lamppost 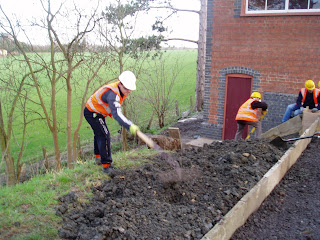 Whilst this job was being completed JC was driving the mini digger, loading the dumper, driven by Jo, to start the back filling on the embankment. Peter shovelling and raking to profile what has already been delivered. 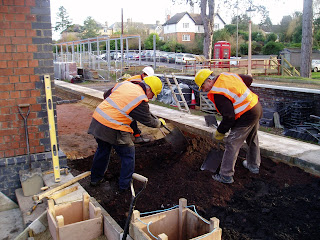 With the job at the top of the steps finished,
Peter S, Peter H and Steve move on to platform infill with the aim of completing the infill up to and over the rodding tunnel and to start back filling the huge hole at the other side of the signal box. 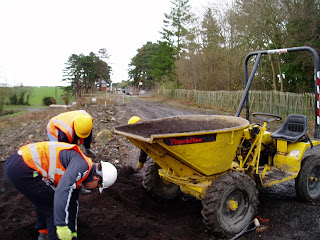 After morning break we lost our digger driver.
JC, being construction manager, had to spend some time with an electrical engineer. Jo went off to show some of the railways Permanent Way team our progress. They had called in for a visit on the way to their Christmas lunch.
Therefore Steve B, hiding behind it, Peter, Terry and Rod decided to load the dumper the old fashioned way for a couple of loads. 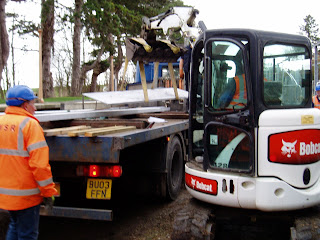 Just as we thought the digger was back in use a lorry arrived with some unexpected steel. It turned out to have been ordered by S & T for the signal box. As they weren't about to unload it and it had to go through the rodding tunnel into the locking room, it was digger and all hands to the fore. 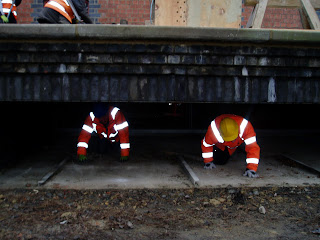 Whilst the infill work carries on above Jim H and Dave B do a recce to work out the best way to do it. Not a lot of room as you can see and as each steel took six men to carry it wasn't easy 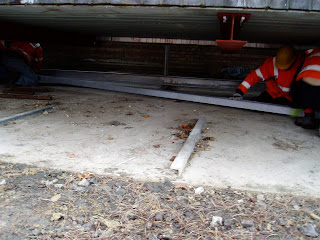 Terry Dave and Peter S with the help of some rollers manoeuvring the steel passed in from outside. We all agreed we did not envy S & T having to spend a lot of time in the tunnel fitting all the rollers, rods, etc. 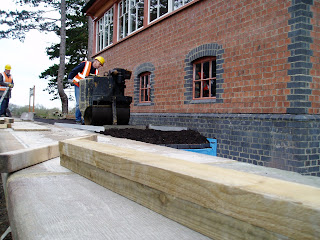 Several hours later and many dumper loads of spent ballast later the infill to the left of the box and over the tunnel is completed, to the level required for now, and is now being rolled by Terry. 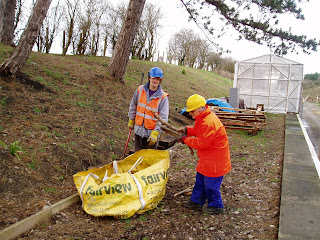 Elsewhere on site Chris and David carry on with the unending task of weeding and keeping the site as tidy as possible.

Martin was further on, carrying on with the clearance of the boundary fence at the top of the cutting 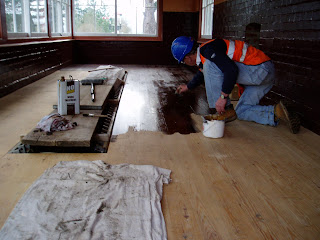 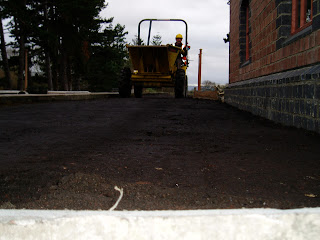 The infill work carried on into the afternoon. Steve slowly approaches across the tunnel with another load. The camera held shoulder high gives an idea of the amount of infill required. Unfortunately there is no other access so the infill just has to be tipped off the end of the tunnel and manhandled from there. 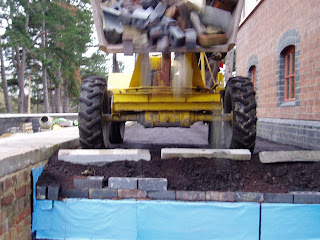 The blocks positioned to give the driver a better idea of how far he can advance. The infill being used here is unwanted and broken bricks and blocks we have salvaged over the years. Each layer covered with a layer of spent ballast and well rolled before the next layer. 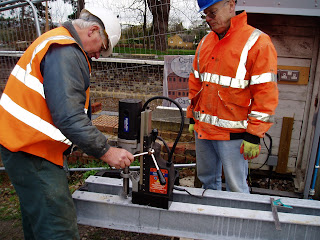 A study in concentration, JC and John S drilling some fixing holes in some of the station building steelwork before it is erected on Saturday.

As always lots of work, unseen by the camera, takes place each working day. Clive and Paul removed the shuttering from the footbridge tower foundation. Site maintenance, the sales shed, meetings and paperwork. Even the Christmas tree now has it's lights.
Posted by BAGBLOG at 08:29