The building blocks are in place.

We were extremely lucky with the weather today and 12 volunteers managed to escape last minute shopping duties to put in a full day at Broadway.


The first job of the day was to start laying out the concrete blocks on both sides of the construction site. 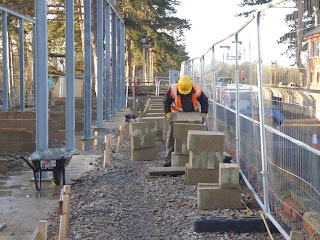 Steve B is starting to lay out the blocks on the platform side on the station building in very neat piles. 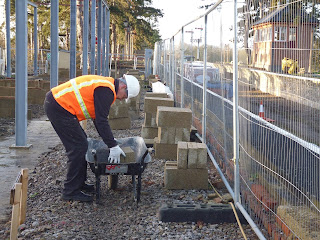 Due to the very limited space available all the blocks had to be transported by wheelbarrow, four at a time. Bob W calculated we needed 24 to fill each gap and for each course. So for ease of use, piles of 12 were made on this side.

Paul is see here adding more blocks to the pile already in place. 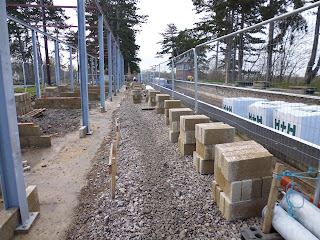 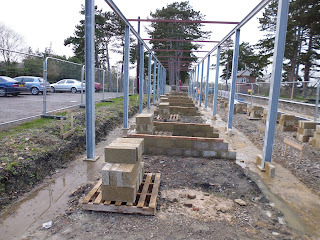 The plies of 24 blocks on the driveway side of the building. They were placed on pallets to keep them clean and off the soil of the foundations. In all over 300 blocks were moved into place by Steve, Paul and Peter H (behind the camera). 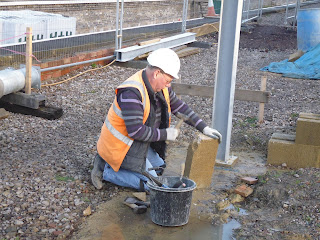 Once the blocks were in place Bob shaped some to fit over the base plates of the stanchions and by lunch time had completed a completed the platform side. The driveway side will be done next week.

Down in the car park area the stream had become overgrown again after a relatively short period of time while other important work was carried out on the platforms etc. As there was a short lull in this work Terry and Rod set about the very important work of clearing the vegetation that had grown up. The steam carries water away from several sources. The surface water from the trackbed being one of them so it is important it is kept free flowing during the  wet weather especially in winter. 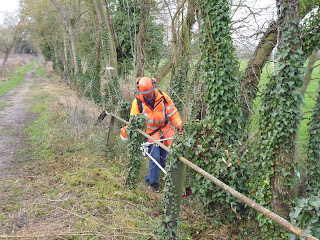 Terry is seen here using the new and more powerful brush cutter to cut back the side of the stream. This is an excellent tool and clears quite large areas very quickly. However it is not an easy task to operate it in confined areas as seen here. 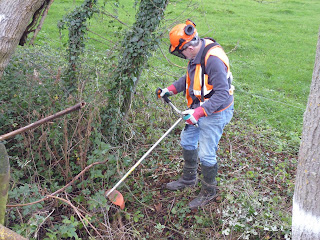 Rod with the other brush cutter tackles some very thick undergrowth on the opposite bank, adjacent to the farmers field. By the end of the day a very decent length of stream had been cleared. 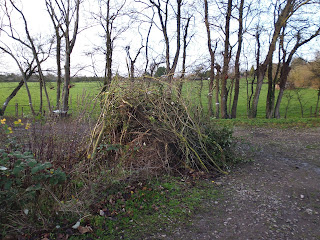 The pile of  branches, saplings and general debris piled high ready for burning at a later date, 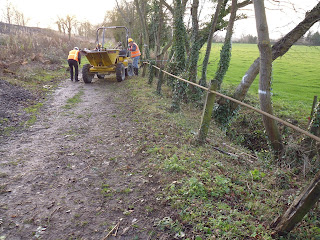 The cleared bank of the stream looking south.
It was a great start to what is going to be a very formidable task to clear the whole stretch down to the Childswickham road, but which will be vital when the car park is constructed in the next year or so.

The foundations for the footbridge tower on platform 2 will be dug in January and the shuttering for the concrete foundations on which the metal tower is attached is being overhauled and oiled ready for use. 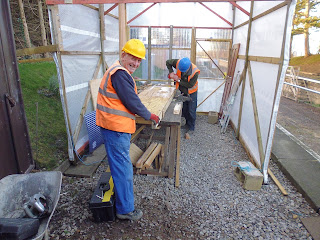 Peter Q, our master carpenter, and Dave H are seen here hard at work on one of the side panels.
They were all subsequently moved to platform 2 and covered ready for use.

Perter and his team have constructed a very useful shelter in which to carry out the many carpentry tasks which they are asked to do. It is especially welcome in the adverse winter weather.

At morning break the crew tucked into some seasonal goodies and of course Terry's packs of flap jacks and shortbreads. Terry brings these to Broadway every week and the Wednesday crew are spoiled rotten. Terry, on behalf of the Wednesday volunteers, a very big  thank you for kindness, they always make the breaktimes very special!

Although there was a small crew today by normal Wednesday standards much was achieved today and we departed in good spirits ready for the Christmas break.

The appeal for sponsorship of GWR repro lampposts for platform 2 has been successful, with the required amount being raised fairly quickly, so is now closed. Thank you to everyone who supported this appeal and others who showed an interest. There will be another opportunity to support the Broadway extension financially when the share appeal is launched in the spring.