A start on the footbridge

Although an enormous amount of work has taken place on the footbridge over the last 12 months or more much of it was, frustratingly, one step forward two steps back. Today, on a brighter note, saw the laying of the first of the concrete footings for the towers which are currently being manufactured. 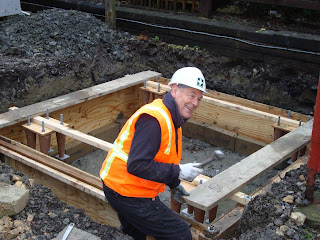 Paul, obviously in good spirits, had the job of carrying out the final preparations to the shuttering including bailing out the water that had collected in there during the past week or so. 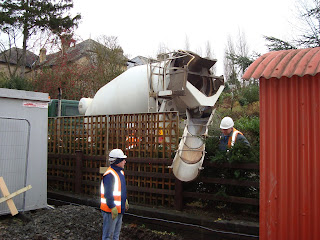 John and Clive were involved in setting up the chute for the mixer lorry. The owner of the adjacent property, which is a guest house, kindly allowed the lorry onto their property and also let us take out one of their fence panels. This saved a lot of work, the alternative would been a bit at a time in the dumper. 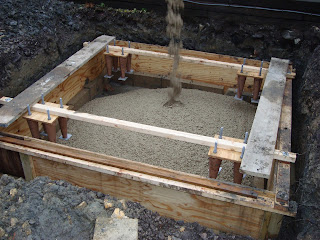 The pour in progress. The estimated amount of concrete required was four and a half metres. 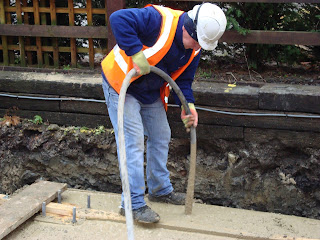 After the pour was completed Clive had the job of  working the vibrating poker into the concrete. It is amazing how well this settles the concrete. At the end of the pour it appeared that we had just a bit too much, after the poker treatment it was obvious that we just the right amount and the estimate was spot on. 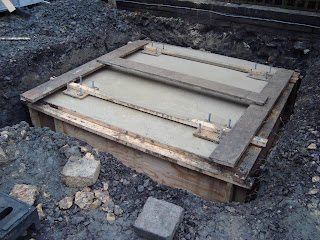 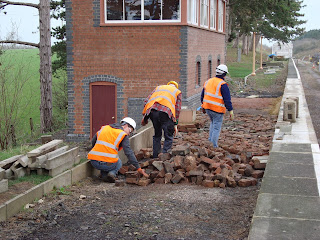 After the excitement of the pour we moved on to the more mundane, but just as important, job of backfilling behind platform 2A. Peter, Brian and Clive are in the process of laying a layer of old bricks which is followed by a layer of ballast. 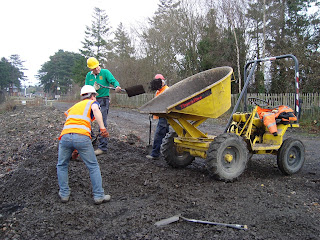 Whether it's bricks or ballast it all has to manually loaded on to the dumper a brick or shovelful at a time and transported up to the platform. Three loads of bricks and five loads of ballast were moved in this fashion today 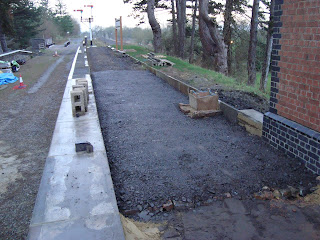 It's all worth it when it looks as good as this. The latest layer of ballast has had the compactor over it once or twice. One more level of ballast to go before we are up to tarmac level. The small shuttering box on the right is the base for the third lamppost south of the signal box. 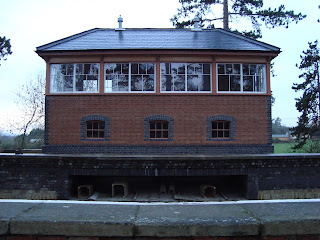 A different view of the signal box now that the platform wall has been completed in this area
Posted by Unknown at 21:52