A Day for Ticking Boxes 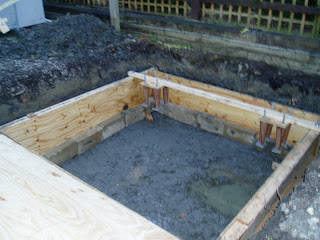 On arrival on a cold and windy but sunny morning I noticed that some extra work had been done, probably on Monday. The shuttering for the footbridge tower had been installed and a start made on setting the bolts in the right position. 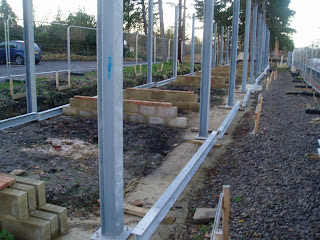 Also the steelwork for the ring beam had been laid out ready for lifting into position. It had been hoped the crane would be on site today for this, but the lift has been postponed until Friday.

On with today; 26 volunteers signed in and the site was soon buzzing. 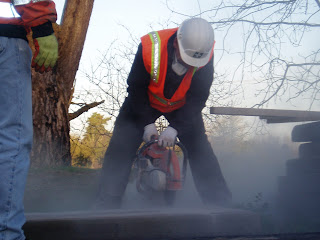 However, an ill wind, as they say and there was a chill lazy wind today. The track bed, not having a crane on it allowed us to finish off the slabbing on platform 2. Paul is seen trimming one of the slabs required to fill the gap. 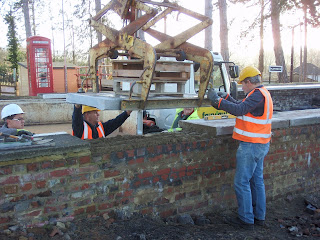 Later in the morning, with the help of the Fairview lorry and Richard the driver, the last slab of platform 2 is lowered into position by Terry, Peter and Rod. Richard is hiding on the hi-ab controls. The Fairview lorry has lifted every slab laid so far and will no doubt lift the last ones when the gap on platform 1 is closed. This will probably be a couple of years ahead, as it is our only vehicular access. Many thanks Fairview and Richard, a real enthusiast who always goes the extra mile. 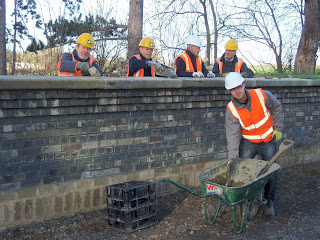 The gap closed, a happy crew points up the slabs, Peter shovels up the mortar to Peter H, Paul, Terry and Rod. Clive, out of the picture, did a sterling job pointing the slabs laid last week. As you can imagine with a site this size a lot of project planning is done by a dedicated team, many meetings to attend and there are lots of charts and time bounded job lists, etc, etc and it's good to be able to sign a job off. Tick 1. 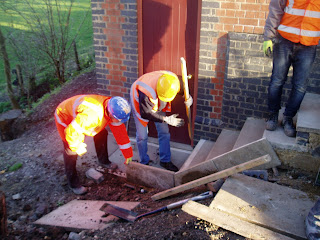 Elsewhere around the signal box more jobs were finished off today. The locking steps finally reached platform level. Mike, Terry and Peter have started the side slabs prior to the embankment being back filled and graded. 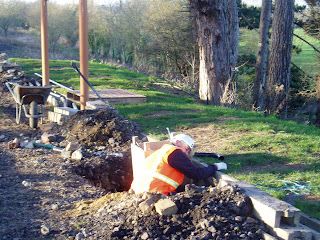 Paul is trying to retrieve a draw string, I think, from the ducting disturbed with the replacement of the lampposts. 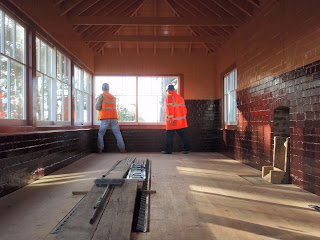 Mike and Graham finishing off the sealing and painting of the windows. Mainly this photo taken by Jim H shows the colour scheme now the lads have finished painting. I believe now it has been decided to stain the floor, although lino will be laid at a later date, so nearly ready for S&T to take over. 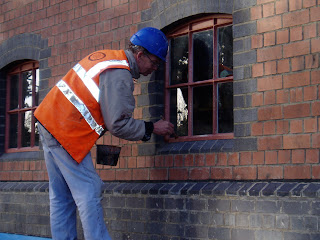 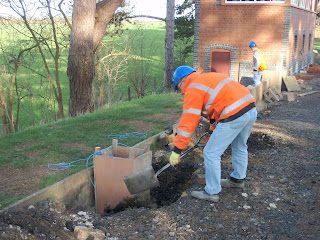 John S who with Jo had been setting the lamppost sockets. These tapered formers are concreted in with a lean mix, rising as the hole is infilled and then removed leaving a socket for the posts to be set in. 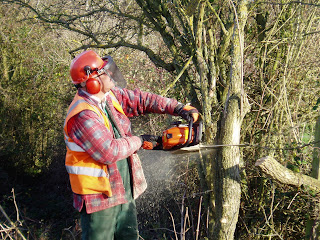 Elsewhere on the site Brian is busy clearing the years of growth on the cutting sides north of the station site. This is a difficult job on a steep sided deep cutting. When safe to approach Brian T and Martin were clearing the cut material to a area for burning. On the opposite side Dave B and Ian were doing a similar job. 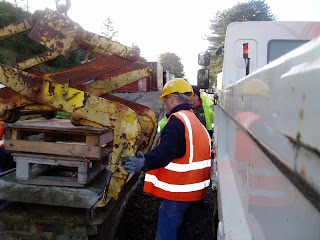 Whilst the hi-ab was on site the end slab of platform 1 slope was lifted and reset, It had been hit by a vehicle collecting some materials not required.  Terry guiding; Richard at the controls.

Below Peter Q, Mike S and Dave working on and in the refurbished shelter now being used for Carpentry. Much work being done on shuttering and door/window arch formers at present. 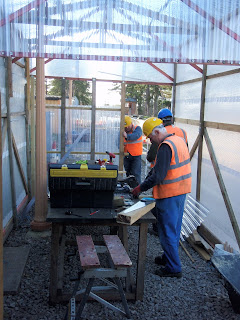 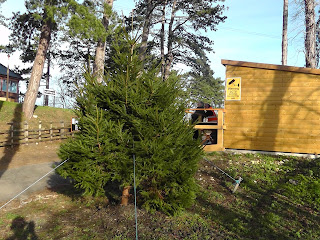 Another important job today was the erection of the Christmas tree by the Goods shed. Yet to be dressed but in position. Steve B and Vic manned the shed in amongst other jobs. 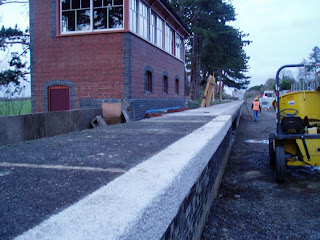 Finally an end of day shot of the completed platform 2 slabbing. In the the background the vertical back slabs also finished today, the a lamppost socket insitu. A good day with plenty of things ticked off.
Posted by BAGBLOG at 10:44