We Will Remember Them

We Will Remember Them

There were 24 volunteers on site today and the weather, despite the forecast, kept dry for us

Shortly before 11 o'clock all work stopped on site and the volunteers gathered outside the mess hut and at exactly at 11 o'clock we all stood in silence for two minutes to remember all those brave lads who gave their lives for us in the First and Second World Wars and in more recent conflicts.

We remembered especially all those who departed from Broadway station to join their regiments, ships and squadrons and who never returned home. We dedicate our efforts to them and to restore the station to be, as near as possible, how they left from it by train all those years ago.
They will never be forgotten. 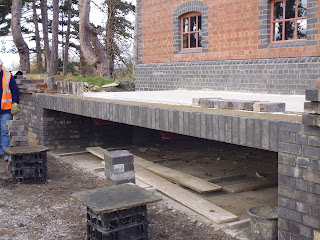 A little bit of catch up first. The picture here shows the row of vertical bricks known in the trade as "soldiers", which were laid by the team who turned out on Monday and very good they look too. They are laid on the front of the RSJ that spans the tunnel. 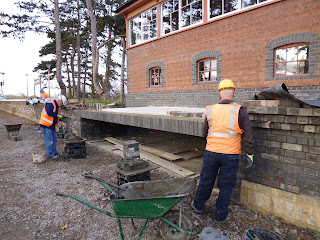 Tony and Clive prepare to lay the first course of corbelling on the "soldiers"  The corbelling to the south and north of the tunnel is already in place, just the back-up bricks to be finished at the north side. 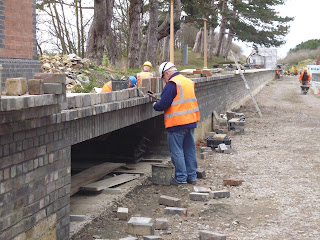 By the end of the day the first row of corbelling on the bridge had been completed and Clive is seen here pointing up his work, it all looked excellent.
Tony and John S finished the backing up on the north side of the tunnel. Just 2 more rows of corbelling to go and platform 2 brickwork will be completed, another great milestone will have been achieved. 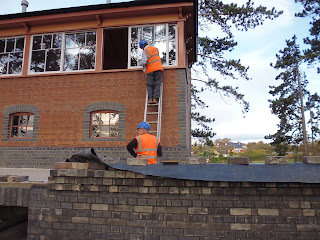 Graham and Mike spent a large part of the morning sealing the outside edges of the signal box windows with mastic. This forms an excellent weather proof seal. The first metal stanchion for the station building gets gently manoeuvred into place. This is yet another milestone at Broadway and once platform 2 is completed the brick laying team will be itching to get started on the station building itself. The primary task was to mark out where the bolts that secure the pillars will go into the concrete. 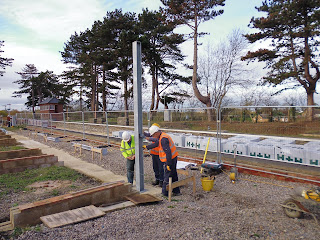 John C, Keith and Terry set out exactly the position of the stanchion and mark the position of where to drill the holes for the fixing bolts.
The same procedure was carried at the centre and the south end stanchions of the platform side of the station building. Unfortunately John was called away for a meeting at Toddington shortly after 11 0'clock so further work was halted. However by the end of the day all the fixing bolt holes for these 3 stanchions had been drilled in the concrete and the bolts cut. We are now ready for the bolts to be set in resin next week and the stanchions erected. 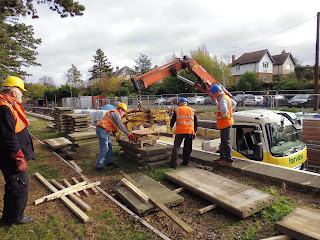 Richard from Fairview came today to help us select and turn suitable ex Cheltenham Race Course Station slabs in readiness to be trimmed by Steve B once he has completed his stone cutter course next week. Rod calculated we need 25 metres of edging slabs to complete the gap and all being well we will achieve this. 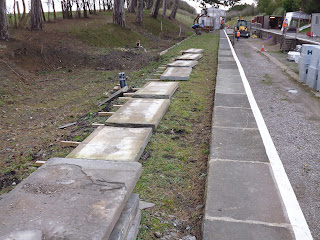 The selected slabs laid out ready for cutting and trimming next week. Once the corbelling is completed on platform 2 slab laying can then commence, hopefully in 3 weeks time.


Last week  Rod, our blogger, mentioned that Tony Appleton had donated some paving slabs to us. It was in fact John Appleton who donated them - apologies John. They are going to be used to construct the steps from the platform to the locking room doorway. They are a very generous donation and much appreciated. Thanks again John 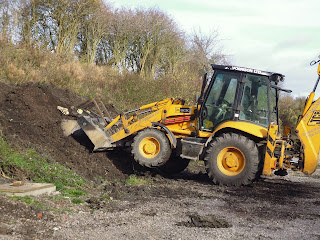 Steve W and the JCB were on site and one of his his tasks today was to re-profile the cutting to the north of the end of platform 1 which was cut out to accommodate the footbridge towers that unfortunately were not fit for purpose. 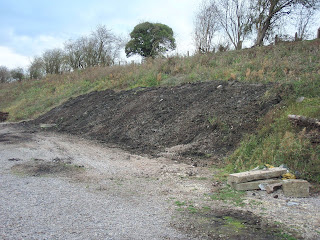 Here is the re-profiled cutting after Steve's work with the JCB. Excellent stuff. 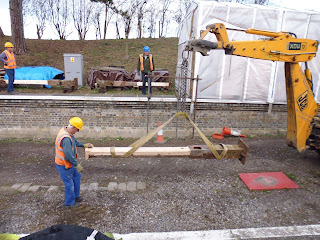 Steve's other task today was to move the reusable footbridge steps entrance posts to be placed on platform 1, adjacent to the shelter holding the footbridge span. Here Peter Q helps guide the post to the platform where they will be restored ready for re-use at a later date. Brian and Terry are waiting to receive it. 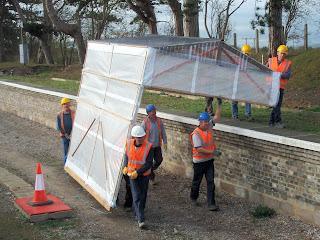 Peter Q's excellent brick laying shelter, having served it's purpose on the gap on platform 2 and, having suffering a little storm damage, was moved to the southern end of the platform to provide much needed cover for the steps posts and metal hoops for the roof of the span.

The team of helpers carry the shelter along the platform

Indeed a day to reflect and Remember.