Rain was forecast and this time it turned out to be correct although it didn't prevent 12 hardy souls from braving it. Those that stayed on site all day benefitted from the afternoon sun. 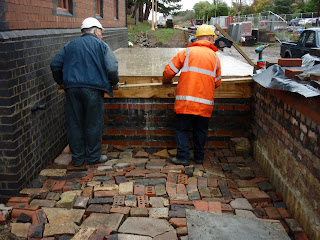 During the morning session John and Tony were able to dismantle the scaffolding and shuttering around the concrete cast for the tunnel roof.
The mosaic style floor that they are standing on was laid last Wednesday just as way of disposing of the odd size and broken bricks piled up nearby and will remain there now and have additional material to fill this space. 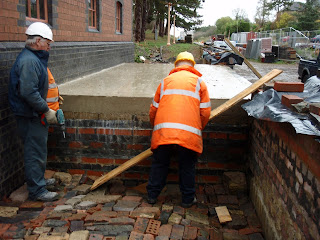 Although the roof, which is also now the base for the platform, looks ready to use it will need a total of 28 days curing time before it can be used by anything other the local wildlife although the wildlife missed its chance while it was wet because there aren't any footprints! 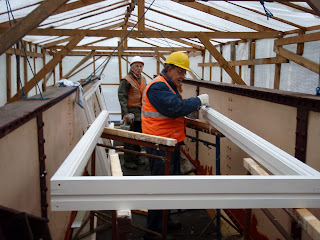 Robin, in the background, and Mike were able to take advantage of the shelter provided by the footbridge "tent" to continue with the painting of the main station building door frames. This is the first coat of primer on side two of the last four frames. 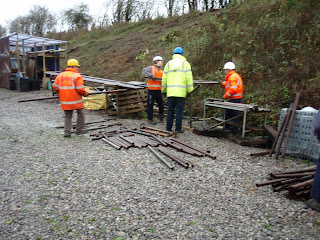 Because of the need to tidy up the footbridge storage area to allow footbridge posts and double hoops to be re-located (from left to right) Steve, Peter, Dave and Keith took the opportunity to move some surplus wood and some scaffolding that had recently been donated by John C. When first delivered, late in the day a couple of months back, the scaffolding had been quickly stored on top of platform 2 but now a more organised solution was implemented.
Dave also found time to install a low wattage heater in container 1, this should eliminate the damp during winter months. 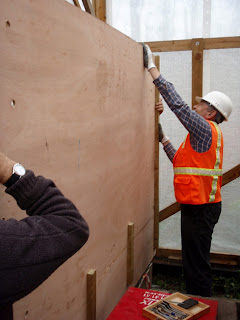 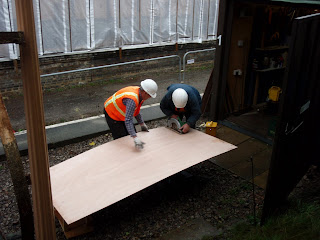 John, Tony and Paul moved on to foot- bridge prepa- ration after the scaffolding/ shuttering dismantling had been completed.
Plywood sheets were used to make templates of the footbridge main span fixing holes. John & Paul cutting a sheet to size in the left hand view and Paul & Tony offering up in the other photo. These will be delivered to the contractor so that the towers can be drilled to match.

No photo unfortunately of Jim, Robin and Dave (you'll have to start taking some selfies Jim) removing the last of the timber from the footbridge tent and laying out a couple of tarpaulins ready for the main span shotblasting, an exiting development.