The weather once again threatened to prevent any progress on the rebuilding but fortunately it waited until the afternoon before raining heavily enough for a halt to be called, all the same 12 volunteers did their best to move things on. 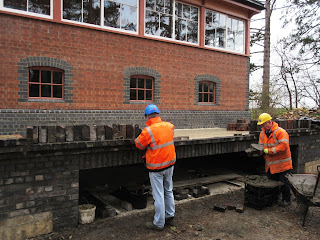 With just the odd spot of rain at 8 in the morning and the latest weather forecast ringing in their ears Tony and John thought that if they got cracking on the second row of corbelling straightaway they stood a chance of getting it laid before the rain became too persistent. This proved to be the case and by the time of the coffee break they were quietly pleased that they had achieved their target. 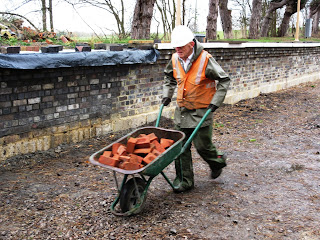 Robin, at the end of the half mile trek to fetch a barrow load of broken bricks from the far end of the site. The broken bricks were useful in filling some gaps in the backing up where half bricks were needed.
At coffee break we were joined by Michael R, one of our long time supporters. Michael soon recognised the volunteer sitting in one corner of the mess room "you must be Robin". Fame (or infamy) at last Robin, they'll be stopping you in the street next! 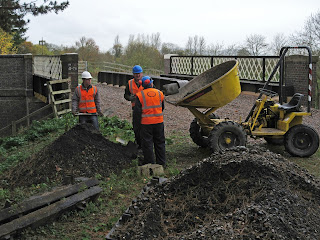 As the non bricklaying volunteers gradually turned up for work they gravitated  towards the signalbox area where Peter, Dave, Brian and Jo (behind the camera) had made a start on moving a couple of piles of spare ballast, by the shovel and dumper method, to the back of the platform wall as infill. The gang are obviously taking a quick break in activity so that there aren't any blurred images on the camera. Peter K picked a rain free moment to do the remaining weld on one of the footbridge hoops before also joining the gang. 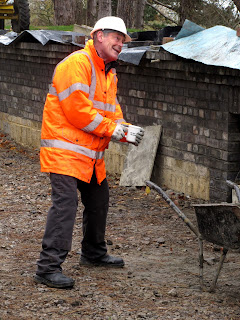 Paul is holding on to the result of his first job of the morning. Did he make a cup for everyone on the bricklaying team? No he didn't and is now trying to explain it away! (We are used to it). He was muck mixer in chief for most of the day but it's fair to say he has had busier days on the mixer front. 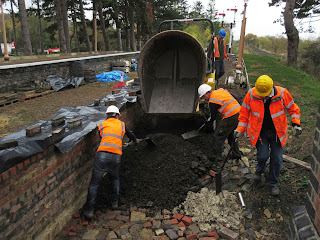 This where the ballast was being tipped, at the south end of platform 2 where it joins the rodding tunnel. By this time Peter and Dave had been joined by Phil and Keith and were busy spreading and levelling the ballast to a depth of about 9". This will be rolled flat before more ballast is added to it.
Just out of sight to the right behind the signal box wall a start has been made on the steps up from the locking room door to platform level. These are being built up in stages using bricks, paving slabs and a weak concrete mix. 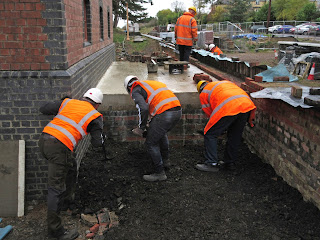 The last of today's ballast being levelled. Tony is about half way along the second course of backing up brickwork which he was able to complete before the lunch break. After lunch the ballast gang switched their attention to the north side of the 'box and began filling that hole by laying a mosaic of rejected bricks as per the south end. Also after lunch Tony and John just had time to point up the corbelling before the rain set in in earnest which forced us into the mess room for a quick chat and off home a bit earlier that usual.