10 volunteers on site today to make the most of the conditions before the weather turned against us.

Although the temperature was only 3 deg. at Broadway, with ice in the puddles, erection of the station building steelwork was taken up from where it ended on Wednesday. 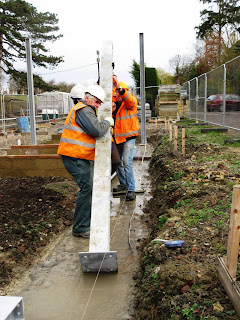 The procedure as with the other stanchions is to set up a builders string line between the two corner stanchions and with this in place raise the next stanchion to be fixed into the required position next to the line or as close as is possible using muscle power alone. 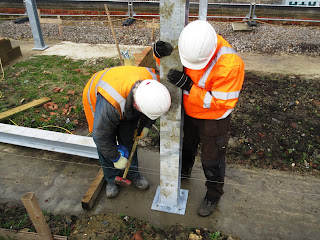 When this has been achieved the final adjustment is by gentle taps with the sledge hammer also using the same technique to make sure that it is the correct number of millimetres from the Honeybourne end corner stanchion. Now in its rightful place it can have its four fixing holes can have a primary mark in the concrete beneath. 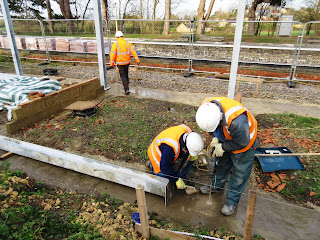 The stanchion is now laid down again to enable the holes to be drilled the correct depth into the foundations. This has to be done with some care to ensure that the studding emerges vertically from the concrete. The stanchion will not drop into place if the studs are pointing in four different directions! After the holes have been drilled the studs are secured in the concrete with resin. 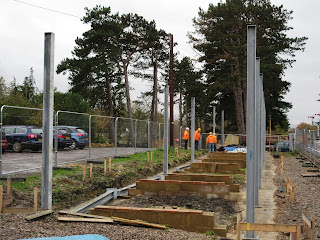 This is as far as the team could progress today before the weather decided to deliver the promised rain and strong winds later in the morning. Although the holes could be continued to be drilled the risk is that rain gets into the holes before the resin can be applied.
Another three were erected today which leaves six more to go to complete this side. 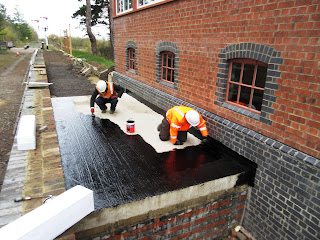 A layer of protective tar was applied to the top of the rodding tunnel. 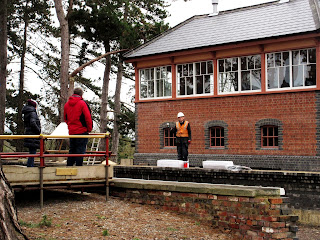 One of the painters took a break from painting to give time to some of our visitors. Was he explaining that expert brick cleaners can be adaptable or that his brick hammer had morphed into a paint brush. 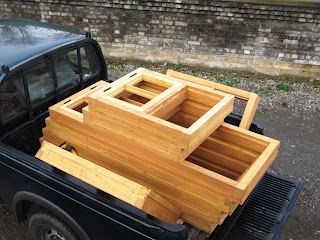 The first delivery of window frames for the main station building arrived and will, no doubt, give our painting team a job in the dry for a few weeks. Aren't they lucky. 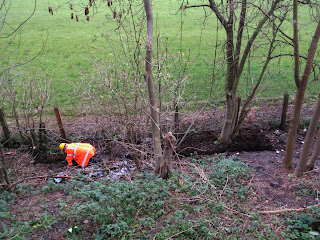 The recent wet weather had tested the surface water channels from the signal box and onward along the ditch. The ditch had obviously been found to be wanting so the upper reaches had to be cleared.