Another Busy Day and a Birthday

A dull, overcast, and rainy day greeted the 28 volunteers to site today.


A team lead by John C were continuing the erection of the stanchions for the station building. Last Monday they had erected 7 more on the trackside of the building. 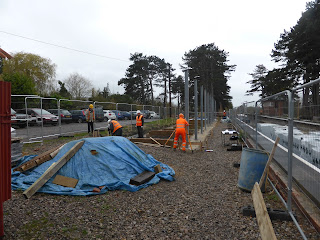 John is starting to drill the holes for the first of the stanchions on the car park side. Gordon is surveying the alignment of the stanchions already erected which will be used later in the day to fix the position of the footbridge towers. 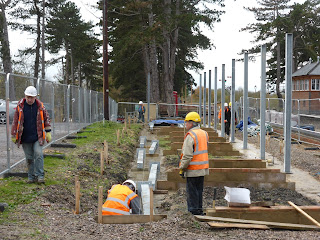 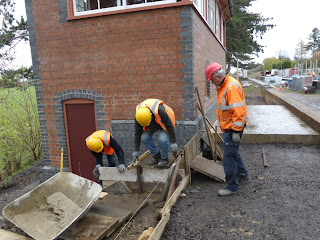 Down by the signal box we find Rod, Terry and Jo working on the steps to the locking room. Rod looks like he is helping the slab down by jumping on it? 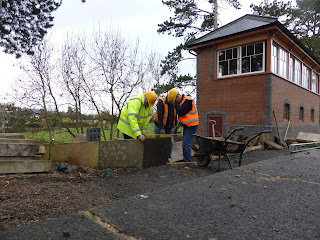 Brian also assisted with the installation of some slabs at the rear of the platform, whilst the newly laid mix on the steps was hardening ready for the next step slab. Back and front filling of the backslabs will soon follow. 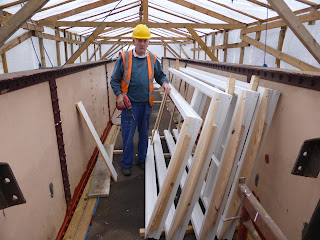 The carpentry team of Peter Q and Dave were in full flow today. First the formers for all the station doors were fitted, Mike then followed behind giving them a first coat of paint. 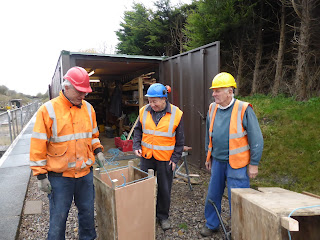 Secondly they made two shuttering boxes for the lamps which will be going either side of the signal box , these were duly delivered with Brian's and Jo`s assistance to the Signal box tunnel until needed.

Thirdly they were asked to make 2 more shuttering boxes for gate posts , by the end of the day we had used up most of the plywood ,and a request for more went out to quartermaster Brian. 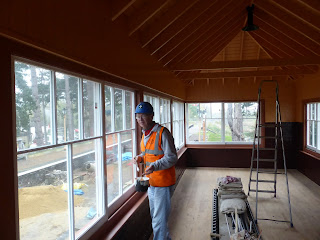 Graham, in the signal box, best place to be on a rainy day, applying the final coats of paint the window frames. 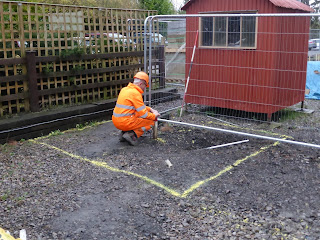 Gordon and John Balderstone finally marked out the position of where the main footbridge towers are going to be, north of the station building.
Here we see Gordon marking out the centre of the tower. In the near future we hope to see this excavated, the shuttering fixed in position, and a concrete slab laid as a support for the towers.

Steve B and Vic both looked after the Goods shed in Julie`s absence.

And finally it was Mike's birthday, celebrated with a "Thomas the Tank engine" cake.
Shame I was busy before everybody had had a piece. This is all that remained ! 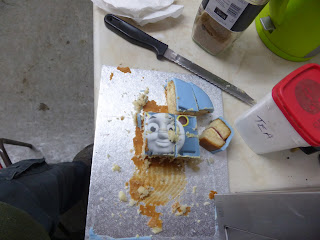 Posted by David Holdsworth at 10:45