Do many shovellers make light work?

14 hardy volunteers signed in at some time during the day today.

The temperature stubbornly refused to drag itself above 5 deg. today which made construction, as such, out of the question. Although continuation of the station steelwork was the intention use of concrete/ mortar or resin (other than specialist) is not recommended at such temperatures so those present concentrated on the one activity that could continue. 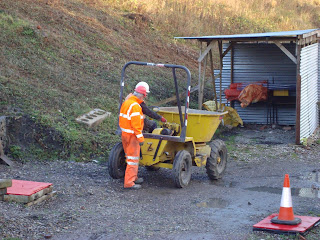 First job of the day for the dumper driver was to get the thing started so Robin and Jo stepped up to the mark. The dumper had already been started earlier, to move it out of its garage, so this attempt should have been easy-peasy, a little warmth in the engine and all that!
There does seem to be a problem however; was it with the compression lever operator (this is not the most up to date dumper in the world) or......... 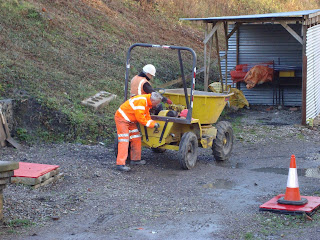 ....was it the lack of a hard hat on the crank handle winder that was preventing life as we know it?

Anyhow after today's blogateer got it started we all moved off to the other end of the site to get stuck in to some work. 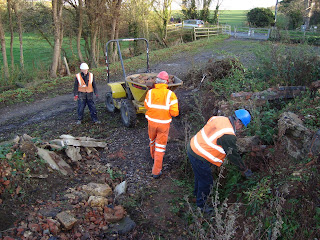 One job that we could get on with, despite the cold, was backfilling the area behind platform 2A with alternate layers of hardcore and ballast. This work had the added benefit of creating body heat which in the biting wind was very welcome.
There is still plenty of hardcore in the future car park area and recent movements of heavy machinery has uncovered some of it so the first priory was to move hardcore up to complete the layer started last week. 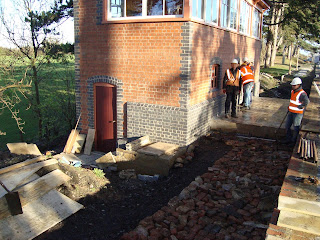 The gap along the left hand side was filled later when John C had finished his drilling operation at this end. 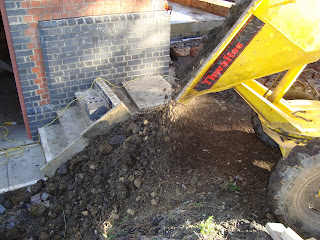 Before shovelling up some ballast to cover the bricks the decision was taken move a pile of soil from the south end of platform 1 to the area adjacent to the newly built steps down to the locking room.
The continuation of these steps up to platform level was another job programmed for today but this also had to be put off until a day when the weather is feeling a bit more benevolent. 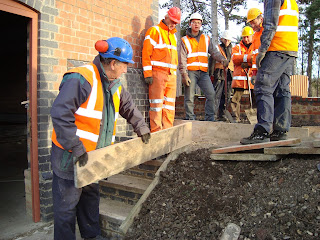 How many hands does it take to assess the size of a piece of shuttering for the next lift in the steps??? Hmmm, well, shifting several tonnes of ballast and soil and bricks by the shovel and dumper method does take its toll on the muscles by mid afternoon and so by this time most were glad to take it easy for a while. 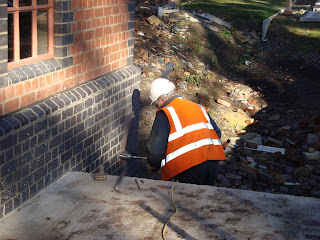 John decided to use the enforced break in construction to drill, well saw really, two extra holes in the front of the box, one either side of the tunnel. The purpose of the holes is to take additional cable ducts for the platform lamps as it has been decided that an extra platform lamp, instead of a wall light, is needed to right and left of the building. This exercise has proved one thing today, those blue bricks are damned hard! 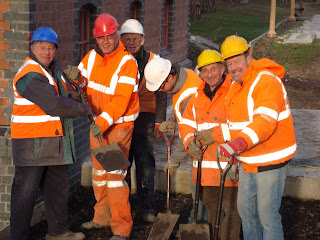 Brian, Jo, Robin, Peter S, Steve and Peter K; a happy bunch of volunteers at the end of the day today justifiably satisfied with their efforts.