There were 24 volunteers on site today. The weather held up for us till lunchtime and then fortunately cleared up sufficiently for more work to take place in the afternoon session.

The great news today was the first three metal stanchions were erected on the concrete foundations of the station building. A total of 7 stanchions on either side of the building will form the metal framework around which the building will be built and which will support the canopy and roof. 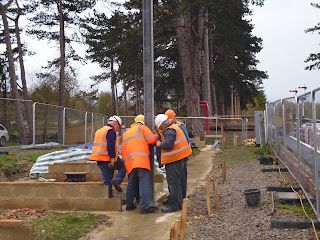 The team of John C, Clive, Tony, Graham, Mike and Gordon collected the stanchion and ensured in went up safely and was located in the fixing bolts. 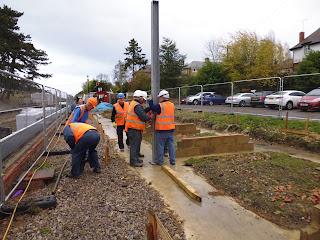 The stanchion is checked that it is installed perfectly in place and the bolts are tightened up to make a permanent fixing. 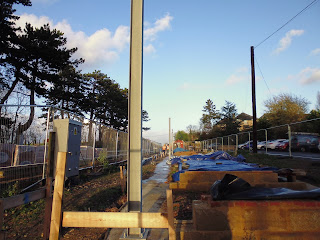 Looking north and at the end of the day the three stanchion are in place. (the large pole on the right is a telegraph pole!)


Great strides were made in the morning with the construction of the shuttering for foundations for the footbridge towers. The foundations will be excavated to the required depth and then the shuttering will be put in place in order to form a smooth concrete base on which the towers will stand, held in place by fixing bolts. 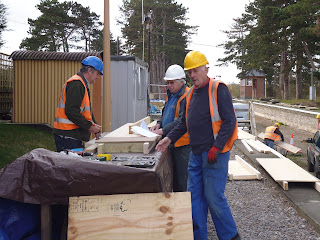 First thing in the morning Peter Q, our master carpenter, Dave and John C gathered together all the previously prepared parts of the shuttering kit. To an outsider it looked like a giant gigsaw puzzle! 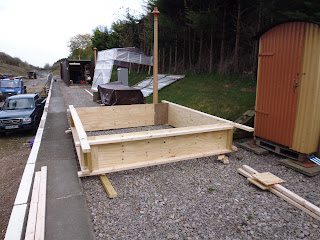 But it was soon put together to form the structure seen here. It also gives a good idea of the size of the foundations needed for the footbridge towers. 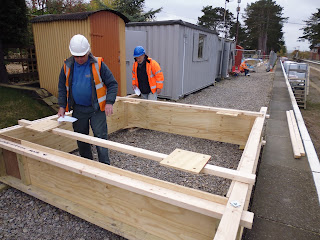 The templates for the position of the fixing bolts were put into place and marked out. Here John C and John Balderstone, the railway's bridge expert, check it out before it was dismantled again and put back in storage for when the big day arrives.


Work was also taking place installing the steps leading to the locking room from Platform 2. 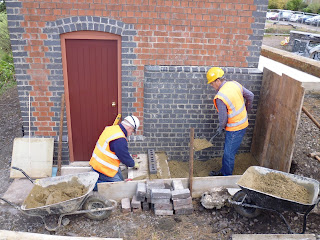 Work is underway with Clive doing the brickwork and Terry making up the concrete base. Rod was in charge of the mixer all morning and the two Peters provided the motive power for the wheelbarrows to bring the concrete to Terry. 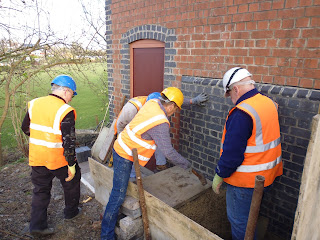 Another paving slab is put into place with help from Graham and Mike who were taking a short break from painting the interior of the signal box.

Graham and Mike reported at the close of play that nearly all the paint work in the signal box is now completed. This has been a monumental task and it is a great credit to them. Visitors will eventually be able to see their superb work at first hand 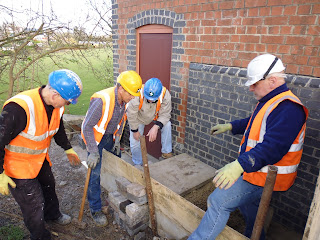 The team with Graham and Terry checking that it is level and ready for the next two rows of bricks, before continuing with the next step.  Many wheelbarrows full of concrete were required to make good the infill. 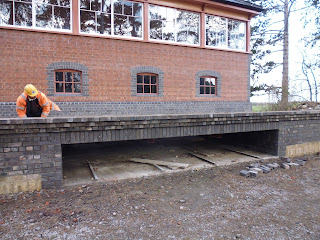 On the other side of Platform 2 the corbelling was finished by the Monday gang and very good it looks too. Slab laying to complete the gap will start in a week or two when the concrete over the tunnel has fully cured. 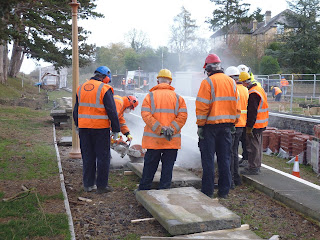 Six Broadway volunteers, John S. Brian, Tony B Steve B, Paul and Jo attended a disc cutting course taken by a fully qualified instructor using a petrol driven cutter, It will enable the Broadway volunteers to carry out stone cutting safely and expertly. The course instructor used the slabs already in position  to demonstrate the correct use of the cutter and the trainees also used them to practice their new found skills. 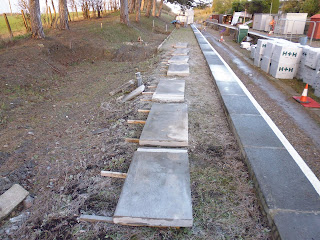 By  the end of the day all the slabs required to complete Platform 2 had been cut and trimmed satisfactorily, A selection of them is seen here.


Mike S did sterling work weeding the foundations for the station building and Vic continued with the landscaping on the driveway.  Julie was in the sales centre and managed to sell some goods despite the poor weather for attracting visitors.

We all look forward to next week when more stanchions for the station building should be in place.