And the work goes on

17 volunteers on site today, must be a new record for a Saturday.

The Bobcat mini digger was summoned to Broadway today to assist with moving the last four remaining footbridge components from the car park area to the main site. 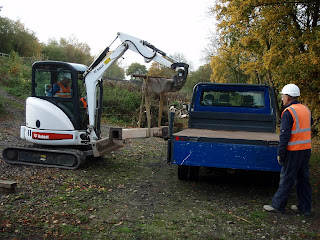 First stage in the operation was to load the cast iron columns onto the Building and Services truck which B&S had kindly driven over to Broadway for us to use. John C was driving the machine while Keith was keeping an eye on proceedings and assisting when safe to do so. 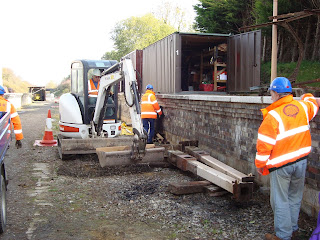 The first two safely unloaded next to the platform 1 wall. John B, the railway's structures engineer, has taken over as guardian of all things footbridge and is acting as overseer at this stage of the operation 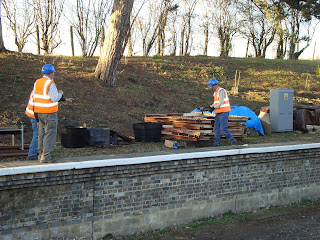 Jim and Roger J, with angle grinder in hand, have spent so much time working on the footbridge over many, many months that although the reigns have been handed over they continue to spend their time on restoring the recoverable components whenever other commitments allow. Roger is about to start working on the hoops that were saved. 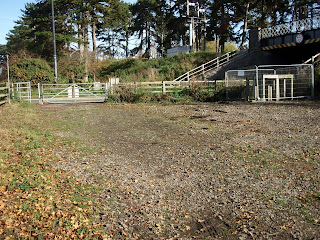 The end result of the Bobcat/ truck exercise is the virtual clearance of the north end of the potential car park site, just the 4 trestles in the corner to go. As Blog followers will know this has been a long and time consuming exercise and just a tad dis-heartening. Well done the footbridge team. 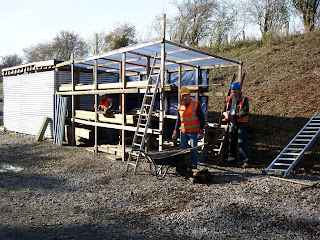 Peter K, Peter S and Dave continued the good work on the wood store. With the completion of the western, back, side most of the weather will be kept out now 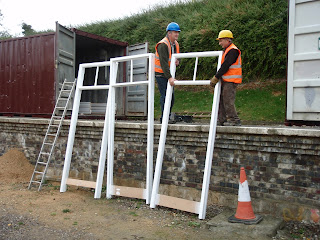 Dave also found time, along with Steve, to progress the priming and undercoating of the station doorframes. 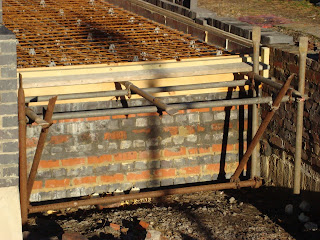 Down at the signal box, after the digger had been retired for the day, John C with the help of Keith and Brian used some scaffolding to shore up the shuttering that was installed on Wednesday. The shuttering alone will not cope with the weight of concrete being poured, especially when the vibrating poker is being used 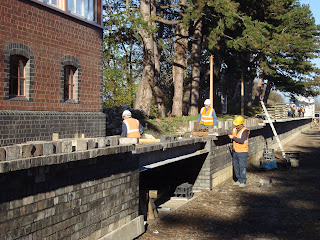 Getting close to the end of the day's activities on the brickwork front with Tony pointing the second course of corbelling on the northern end . 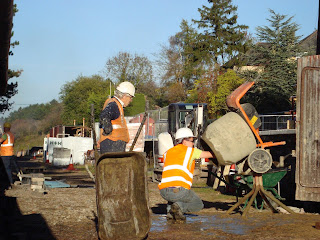 Peter S maybe starting his apprenticeship as a mortar mixer in true railway tradition as he learns how to clean the thing, with Robin's help, before being let anywhere near the operating side.
Posted by Unknown at 12:07