23 volunteers signed on today but 8 split off to attend a first aid course although a lot was achieved by those on site.


Dave B, Gordon and Roger J were kept busy with meetings today to get things moving on plans for the car park and driveway areas.  Firstly, going over the key issues & planning how we were going to organise the day prior to a visit from a landscape contractor. After a hasty lunch we were joined by the Alan B, GWSR Chairman, for a meeting with the County Highways Dept. and this was followed by a visit by a second landscape contractor.  All discussions were very positive and helpful and we can now make good headway with specifying and pricing the necessary work.


John C and Steve joined forces to tackle some outstanding jobs around the signal box. First to be tackled was the tieing together of the reinforcement over the rodding tunnel which had been partially constructed last Wednesday. 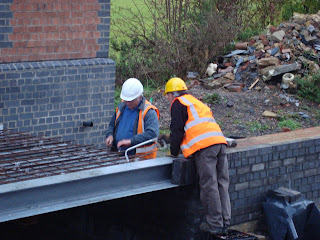 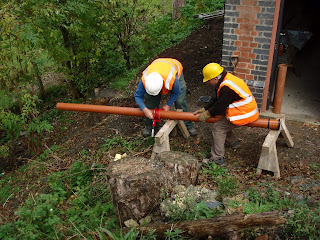 While waiting for the last two sheets of reinforcing material to be delivered they turned their attention to the rainwater drainage at the back of the 'box. The channel for which Keith G dug out a couple of weeks ago. The northernmost outlet is piped along the rear of the building to a junction at this end before emptying into the ditch below 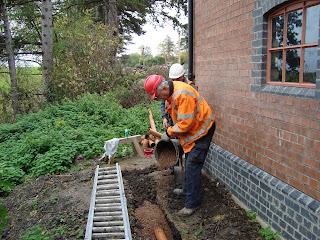 After the pipe had been installed the top of it was covered with pea gravel. The bucket method may seem to be a bit slow and deliberate but with the severely limited access to this part of the site it is the only practical method of doing it. After a bit of shunting the dumper, full of gravel, was guided to the top of platform 2A from where Steve and Jo gradually unloaded it, one bucketful at a time, into the trench. 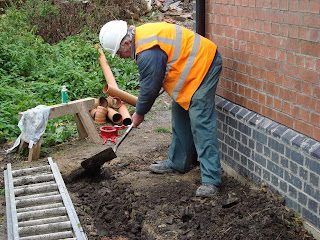 Finally, John followed on behind backfilling the top of the trench with the top soil that had been dug out previously. 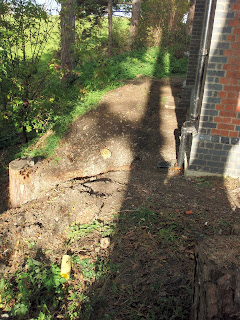 The area now restored to nature

Meanwhile at the Honeybourne end of the site.... 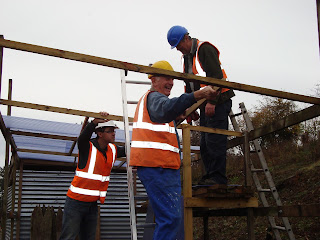 ....Peter Q gathered a select band together to continue with the construction of the store for surplus wood. Just wondered, you're not going to use all the surplus wood building the store are you Pete?Anyhow, Dave H is up in the gods waiting to secure the latest piece of the frame to be offered up while our newest and youngest (just) member Peter S is helping to stabilise things while it all goes together 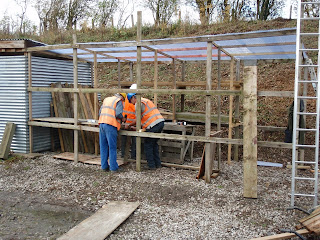 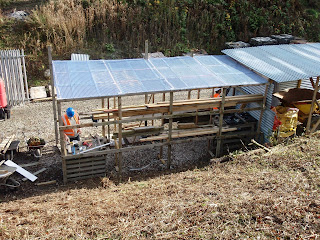 Two views of the shed, one from track level and the other from the embankment above showing how well its coming together. 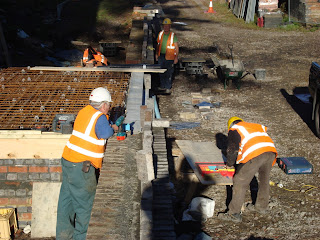 Fairview delivered the remaining sheets of reinforcing during the morning so that that stage the tunnel roof could be completed. John and Steve were then able to move on to the construction of the shuttering at either end of the roof ready for a delivery of fibre reinforced concrete next week. 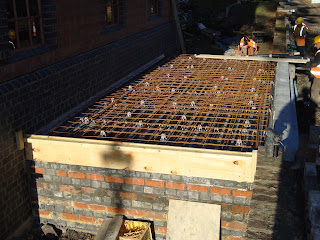 The Toddington end was the first to be completed using shuttering ply temporarily fixed to the signal box wall at one end and the platform wall at the other. They then moved on to the Honeybourne end having just enough time to finish it before close of play. One last piece of the jigsaw is to fix a section of shuttering just a couple of inches high along the top of the RSJ to match the shuttering at each end. 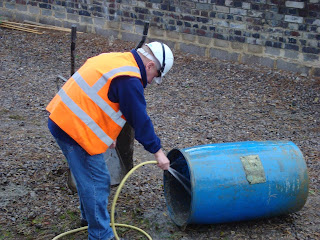 As can be seen in the previous photo bricklaying continued through the day but before a start could be made an important job had to be done, The water barrel have become so full of old sand and cement etc from people washing off their tools that it was on the point of refusing to accept water any more. Much heaving and shoving was required to get the brute on its side to allow the waste to be shovelled out. Once that was done followed by a quick swill round and we were in business. 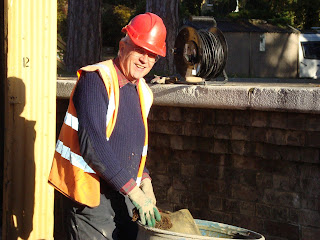 Jo was maître d'mortar today, seen here out carrying out the very operation which had sludged up the water barrel previously. The task of mixing was not too demanding today with the two brickies on both sections up to corbelling level and only one backing up, which obviously has the effect of slowing down the mortar usage. 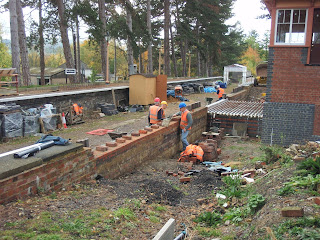 With a little time to spare Jo could admire Tony's corbelling skills on corbelling the first level on the northern section. Clive is carrying out the same operation on the southern section but is on the second level. Only one more level to go one southern section although this end has fallen behind a bit on the backing up. 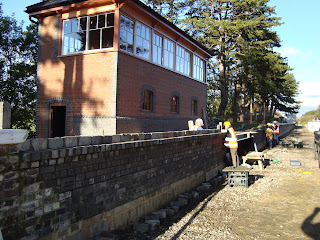 A good view of the platforms looking from the south showing two levels of corbelling at this end. John and Steve working on the shuttering while Tony and Clive are pointing up. 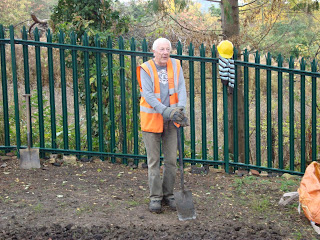 Vic was carrying on the thankless but vitally important task of keep the driveway and surroundings free of weeds etc. This area is being turned over so that it can be seeded with grass when conditions allow. Just be careful that you don't have a cone fall on your head. 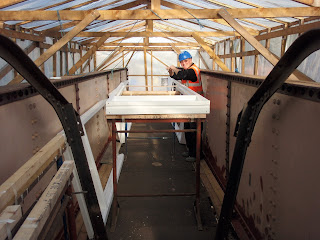 Mike was ensconced in the tent, well more like a marquee, that was built to protect the footbridge span. This comes in very useful for in providing an indoor environment for painting and storing things and has been used to good effect recently for painting the door frames that were delivered recently. Must have been pretty warm in there Mike. 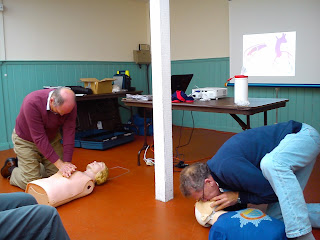 As mentioned earlier 8 of the volunteers put their names forward for first aid training. This was an all day event which took took place at the railway's Elf centre at Winchcombe. Graham is the one seen giving the kiss of life. 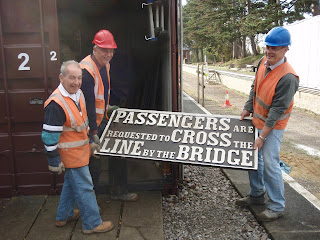 Recently donated to Broadway were two of these cast iron signs. They are reproductions but are very heavy just the same. They have been in store at Winchcombe until recently but the railway's Building & Services dept decided that we could make good use of them at Broadway station. 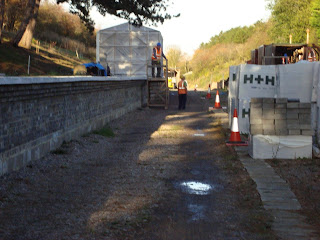 A poor quality photo unfortunately but couldn't resist this one of Duty Officer Jim in the pulpit
Posted by Unknown at 13:06