A Better Day Than Forecast

Wednesday 4th November
This morning started with some drizzle but the day turned out much better than forecast. There were thirty signed in to the site today. 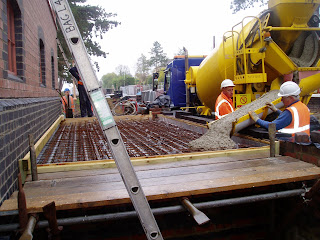 One of the first jobs was the concrete pour for the signal box rodding tunnel, with the concrete arriving at 0830. The driver managed to get close enough to use the chutes  to start the pour, JC supervising 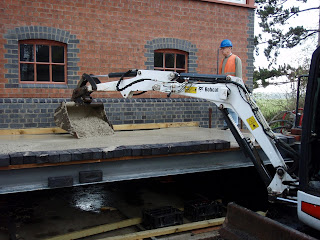 As the pour continued, because of the height and reach required, the mini digger bucket was used to place the concrete where it was required. John S waits with the rake to fill any dips. 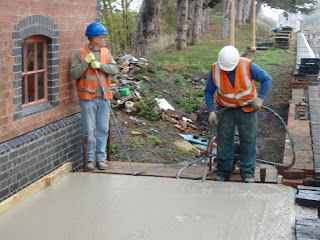 JC uses the vibrating poker to ensure the concrete is well settled into the roof formers and reinforcing mesh. 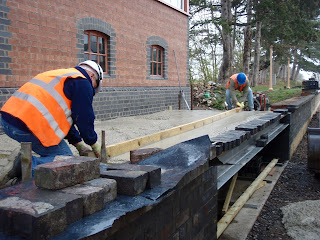 Clive and John S start the arduous task of using a levelling board which needs moving backwards and forwards across the shuttering to level of the concrete to the correct thickness.

Elsewhere on the site Keith and Peter S were barrowing some bricks required for the backing up of the blue bricks on the platform wall in front of the signal box. 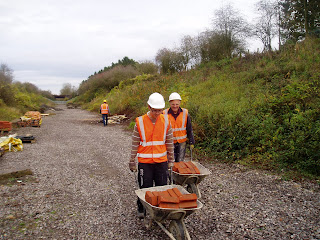 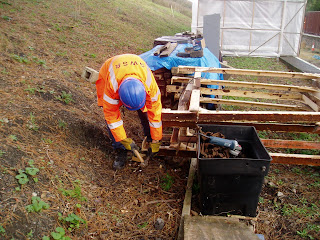 Roger J, was working on the roof support hoops recovered from the old footbridge The plan being to integrate some of the original steel in to the new build sections.
Strange but he decided it was better to look at what he was hitting with the hammer rather than the camera 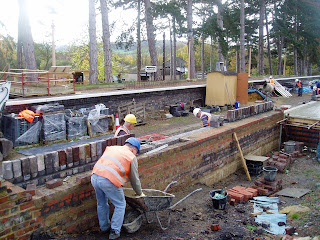 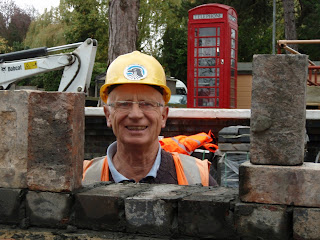 Tony B showing how enjoyable it is getting to the top row of corbelling. Only a station building to go! 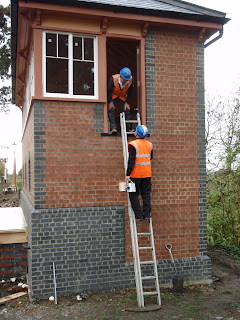 Graham  and Mike carried on with the painting on the walls in the operating room. A proper set of stairs will be fitted when we get the infill done. 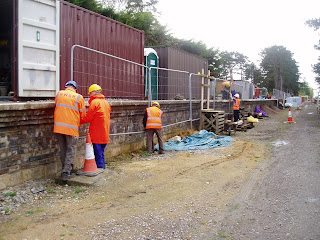 During the day, the wood store was finished and is now in use. More painting of the station door frames was done and the fitting of ladder racks in the storage containers allowed more reorganisation of tool storage. Vic and Pat carried on with the weeding crusade, Vic on the station approach and Pat making a start on the station area. Julie manned the Goods Shed.
Also after a visit from the railways H&S officer a group of volunteers erect a temporary guard rail along part of the platform. He felt that where the storage containers were, anyone passing was to close to the edge of the platform. 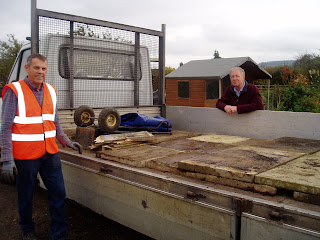 Later in the day Terry and Rod went to recover some more paving slabs donated to BAG by Tony Appleton, seen with Terry during loading. The slabs were kindly collected by Paul who has often moved items for us, free of charge, when he can fit it in with his work schedule. A good friend to the railway. Thanks again Tony. 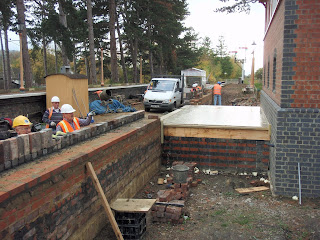 A final picture shows the concreting finished, the top row of corbelling finished with their counterweights in place until the mortar sets. In the background the slabs collected earlier are being unloaded.