25 volunteers one site today in addition to visits by other volunteers and contractors.


Each day has its own highlights and today was no exception but for many it was the sight of Underwoods making their delivery..... 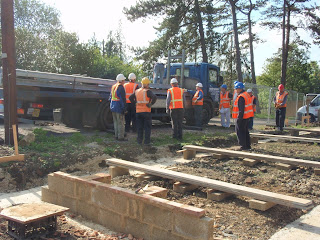 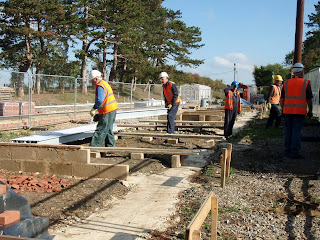 John and Keith take their turn inn helping to off-load the steelwork. First to come off are parts of the ringbeam. Each section of the ringbeam will be bolted at either end horizontally to the top of the supporting stanchions. The stanchions are still on the vehicle at this stage. 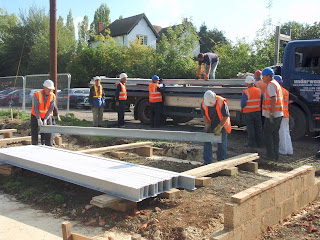 The Underwoods driver was quite vocal at times during the unloading, shouts of "mind my ******* foot" were heard several times (I'll leave it to the reader to replace the asterisks with a suitable word. Paul and Clive add another ringbeam section to the steadily growing pile. 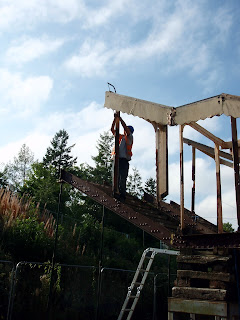 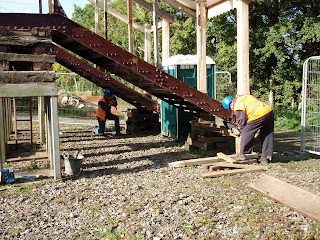 Work proceeded on the footbridge staircases. Dave, left hand view, is working on removing more of the high level timber ready for craning while Brian and Ron, photo right, were building a frame around the 2 of the 4 staircase posts which we are attempting to save and re-use. It seems that Brian must have an exceptionally long arm to reach all the way round that post but it is actually Ron hidden from view (apart from his hand). The frame is to assist with the craning exercise when these are cut free from the rust damaged stringer beams. Roger, in the background, is cutting off rusted nuts and bolts and removing the wooden treads. Another 9 removed today with 5 more loosened. Well done the footbridge crew! 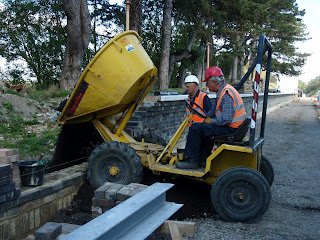 Allied to the footbridge is the need to build a temporary ramp to allow a mini digger to access the top of platform 2. This part of the platform wall is now the only reasonable access point so Jo, with Keith's help, persuaded the driver of our on-site maxi digger (see below) to fill his dumper a few times so that the basics of a  ramp could be constructed.
This machine is on site to help engineers investigate to state of the embankment. See our sister publication 'The Broadway Extension blog' for more details. 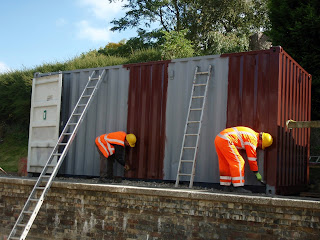 Steve and Mike setting about turning the Broadway world chocolate, one container at a time! Where's the cream guys? 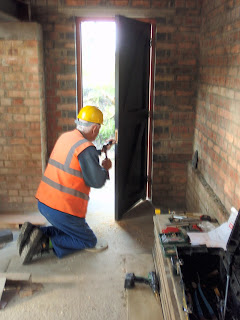 Peter Q, having served a very rapid lock and door handle fitters apprenticeship during the early morning, proceeded to fit the lock and door handle to the locking room door with the help of Peter T. Strangely, the kit of parts was missing one vital component, the spindle, so commissioning will have to wait until next week.
Of course the platform wall outside the signalbox was not forgotten and many hands were present to speed things along 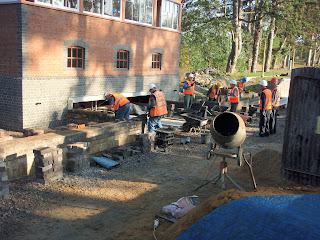 It appears that Paul is having his knowledge expanded by being given the benefit of John's many years in construction, the trowel being used to emphasise the finer points. The rest of us keep our heads down. 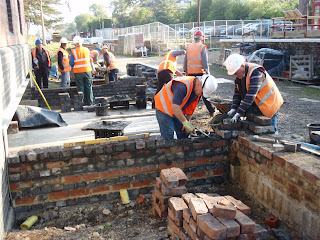 Bob and Clive are building up the southern corner of the tunnel wall while John, Tony and John work on the northern section. Division of labour a bit unfair maybe? Well the south had a head start so the north were in catch-up mode. 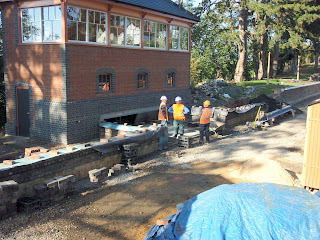 At the end of the day the brickwork had been covered so progress is not too clear but the northern return wall that John C had been working on had reached the level where the steel beam can be lifted on. The southern section should reach this level on the next working day. The plan is that the tunnel roof will be constructed before the RSJ goes on. 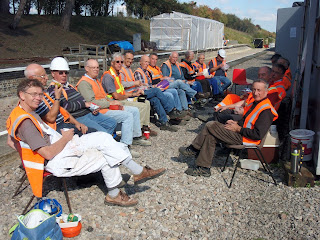 The merry band at lunch time including Graham, nearest camera, continuing to give the signalbox interior an excellent finish.
Posted by Unknown at 12:44