Glad to be there

13 volunteers joined in the activities today, another good attendance for a Saturday.


With the delay in the disposal of the footbridge staircases Roger was able to take advantage of this to loosen some nuts and bolts so that the removal some of the remaining woodwork would be that much easier when the staircases are on their sides. 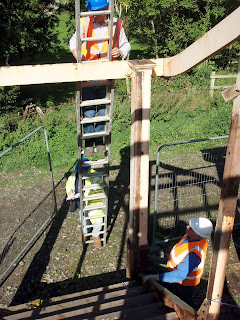 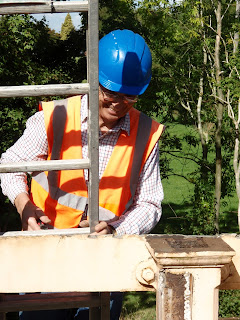 During the morning John B, the Railway's structures engineer, standing at the bottom of the ladder, visited the site to hold an in depth technical discussion with John C, Roger and Jim on the staircase/platform canopy interface with particular reference to the proximity of the foundations and the canopy overhang. 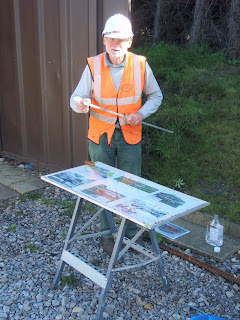 It is a fact that there are a lot of Johns at Broadway so distinguishing between them can be difficult. A different John B is re-invigorating the display board which is usually mounted on the visitor viewing platform. 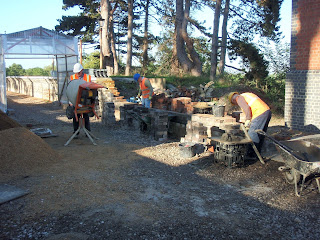 After the phenomenal effort by the Wednesday gang, to mix by hand and lay several tonnes of concrete to form the floor of the rodding tunnel, the Saturday brickies continued with building both sides of platform 2 wall. Paul is mortar man today while Tony is working on the return wall and John (yes, another one) is backing up the facing bricks laid a couple of weeks ago on the south side. 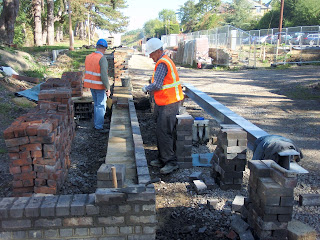 After tea break the backing up switched to the north side of the gap between the platforms. The RSJ to support the platform is very prominent here waiting for its moment.

Paul is assisting the brickie on this occasion... 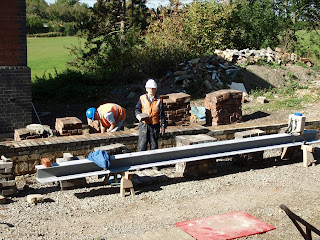 ...and sometimes it was Robin.

This course of bricks is not being taken any further northward at the moment. The plan is to construct a temporary ramp up to the lower section of wall to allow a mini digger to get up on to the top of platform to dig a trial hole for the footbridge foundations sometime early next month. 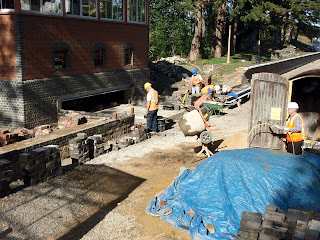 By mid afternoon all the mortar that was going to be mixed had been mixed and Paul is cleaning the kit. There are a few more bricks still to be laid but this is pretty much the scene at close of play. 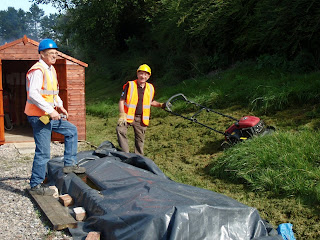 The fine weather allowed Steve, right, with hand on mower, to give another coat of paint to what is now the grey container. It may end up as another brown container which is more in keeping with its neighbour and the Great Western of course.

We may have to introduce serial numbers for our containers if they all look the same. Jim...... 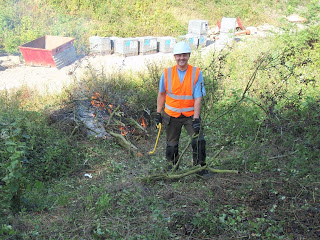 After the paint had been expended Steve mucked in with Jim and Phil (Phil seen in photo left having a quick break from his exertions) who were spending the day keeping the vegetation under control. 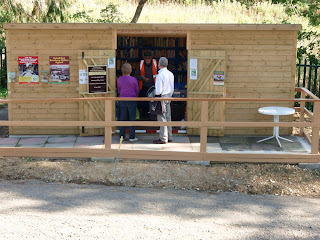 Ron was on duty in the bric-a-brac shed today and he had a very satisfactory day not only with the items on display but keeping our visitors informed about what we have achieved so far. 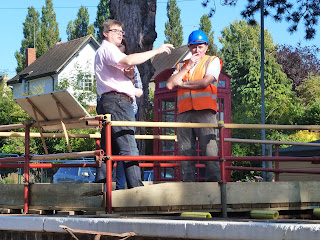 The viewing platform with the refurbished information board in place and some more of our visitors asking Jim how did you do that and when are you going to do this.
Another lovely sunny day when we all go home feeling tired and achy but glad to have been there.
Posted by Unknown at 11:37