Another block in the wall

Plenty of room in the mess hut today with only 7 of us in there plus Ron in the Shed and Vic, who popped in briefly to open up and switch the tea urn on for us! Thanks Vic.


Today's report will necessarily be fairly brief. Steve made a few trips round the site on the dumper to gather up certain items including some of the wooden steps from the footbridge staircases left over from Wednesday and re-locate a "small" pile of ballast from in front of the signal box. Well, small was the word used but it must have been close on a tonne as it filled the bucket on the dumper. 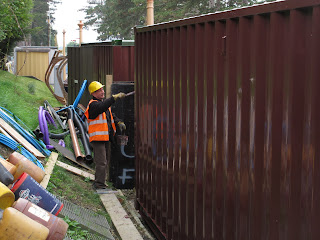 Steve also found time to use up the current stock of chocolate coloured paint by adding some finishing touches to the former grey container. While Steve is on a roll with the brush we thought it would be a good idea to provide him with another container to hone his talents on, so the redundant one from Racecourse is being brought over next week (officially to store building components in). 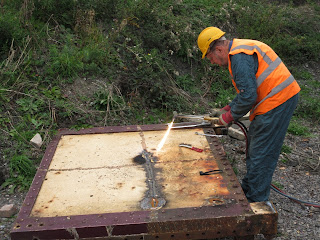 Peter kindly went to the trouble of bringing his oxy/acetylene flame cutting kit to Broadway again and set about torching the remaining pieces of the footbridge supports. Peter was obviously a willing worker but the torch decided that today was the today to make its presence felt and the cutting valve stubbornly refused to work correctly and ignite the steel. During the resulting strip down of the torch a couple of small parts decided to jump ship for a new home in the ballast, luckily Peter had the wherewithal to make some replacements. Nice one Peter!


All other activity centred on the signal box rodding tunnel side walls interspersed with occasional forays to the platform wall while waiting for the mortar to go off a bit in certain places. 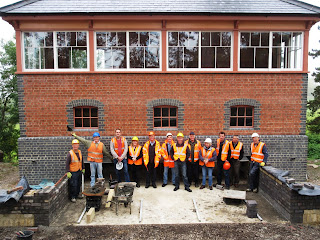 Early morning visitors were the Mid-Hants P-way dept and their wives who were spending a day on the GWR, some had made the journey from Southampton in weather far from ideal. Nice to meet you guys and gals. Jo undertook the task of showing our friends around the site finishing with a photo shoot outside the 'box. Hope you enjoyed your day on our railway. 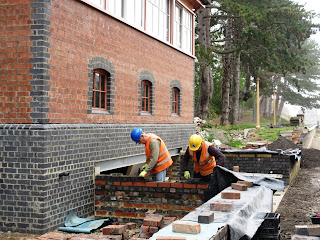 The final course of bricks on the return wall for now, being laid by Tony and John 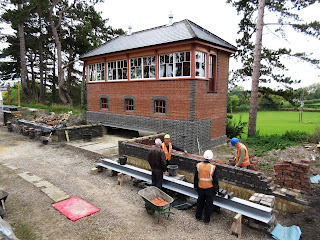 While we waited for these to go off a bit we laid two courses on the north side of the gap still making an allowance for a digger to get on the platform. Keith was in charge of the mixer today with Robin giving assistance as and when required. 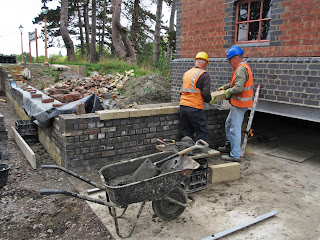 After two courses of platform wall we judged that the mortar under the brick course on the return wall had gone off enough to make the laying of the heavier concrete blocks possible. Much use was made of the laser level, handily leaning against the signal box wall, when laying the blockwork. 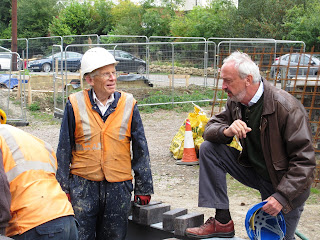 Late afternoon saw the appearance of the PLC's finance director, just checking that we were still hard at it or maybe getting some advice on how another well known heritage railway does or doesn't do it! Must remind him next time that the blue hat is meant to be worn for protection not to be used for a whip round to help the coffers.