The roof in place

A grey day weather wise but it didn't deter the 15 volunteers who turned up today.


Some of todays photos proved to be difficult to copy on to the blog in the JPEG format so they have had to reproduced in the GIF format which may impair the quality of some of the photos. 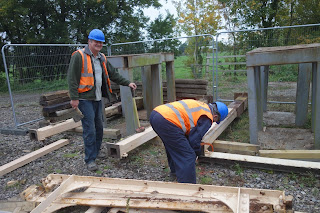 Dave seems to have rather a wicked smile on his face, wonder what's going through his mind? Luckily Brian is oblivious to it and just got on with the job, when it was completed they offered their assistance to Pete the carpenter at the north end of platform 2......

......where they assisted in the construction of the wood store which is being built as a northerly extension to the dumper truck garage at the Honeybourne end of the site. The purpose of the wood store is to provide accommodation for usable lengths of timber and so relieve the pressure on the containers so that they no longer get cluttered which will give storeman Brian a chance to keep things shipshape (well, he is a retired salt).

Meanwhile, Vic singlehandedly continued the never ending battle against the weeds and the brambles this time taking the fight to the western cutting slope north of the station.


The signal box, as it sometimes does, used much of the available labour. At the back of the box Keith and Phil put their efforts into digging out the channel for the rainwater to run away. The water from the downpipe at the north end, nearest camera, will run into the drain at the south end via this 1 in 60 trench once the piping is installed.

Phil was obviously much in demand because he was later to be found at the front of the box assisting John. 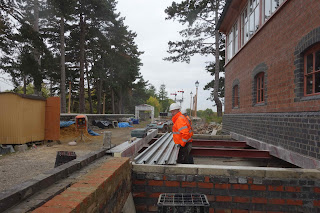 These corrugated sheets will be the roof of the rodding tunnel and will also be supporting the platform in this area. The first sheet is being offered up to the recently installed RSJ, insulation material has been used to fill the gap between the webs of the RSJ although this will be hidden once the reinforced concrete is poured sometime soon.

Phil making a final adjustment using one of the specialist tools of the trade. 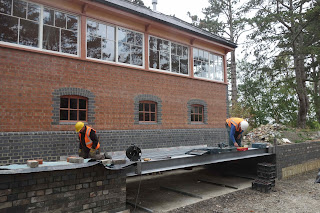 The sheets were secured in place by John by being drilled. plugged and screwed. Steve is playing an absolutely vital role in this process. 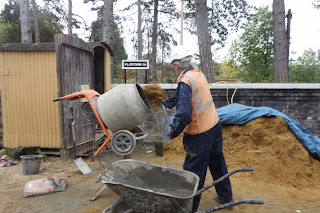 Robin, mixing the mortar, and Tony on the trowel lay another course of bricks on the wall to the north of the signalbox. This is the last course on this section before corbelling.


On Thursday 15th October Jo, Keith and John S borrowed the railway's pickup truck to collect two GWR No. 2 lampposts that, together with Roger, we had purchased from the Matlock based Peak Rail with the help of Peak's Ben Riley. The posts were actually in store at Rowsley and this is where the group is seen loading the posts onto the truck. No.2 posts are slightly taller than usual no.1 platform lamp and would be suitable for Broadway station drive. While we were there Derek from Peak Rail showed us the superb restoration job they had done on LMS coach 7828. Should be in traffic next year so will be worth a visit. Thanks to the guys at Peak Rail. 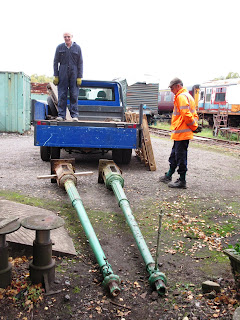 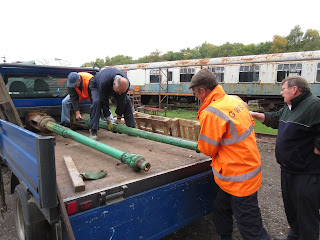