A total of 34 volunteers and other GWSR visitors today. 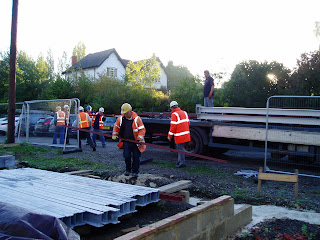 It was an early start for a lot of the volunteers today. With an early delivery of the remaining steel for the station building and the extra steels to be put in the signal box rodding tunnel. Tony, Clive, John S, Keith and others start the day off with a bit of weightlifting. 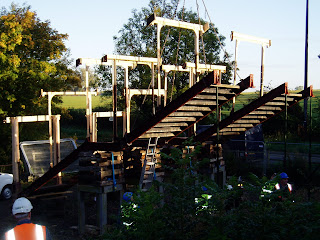 Down on the car park the operation to dispose of the unusable staircases from the footbridge got underway very early. The security fencing had to be removed and the entrance cleared for the crane arriving at 0800. This picture shows the crane already set up and the chains in position to take the weight prior to gas cutting through at the midway landing. 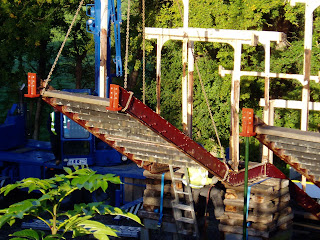 From the top of the embankment this shows the section supported by the crane, with the props removed, being cut through before lowering to the ground 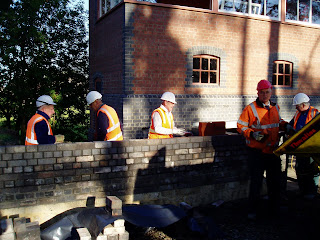 Back at the signal box, Jo has just arrived with red bricks for backing up the blue brickwork leading up to the rodding tunnel. Paul,Keith and Clive fresh from their steel moving are assisting with the positioning of the bricks behind the wall. 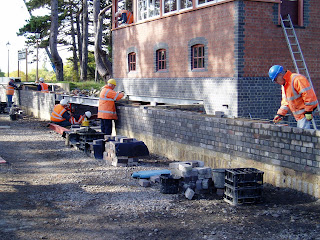 John S, Tony, Clive and Bob W are seen continuing laying facing and backing bricks on both sides of the tunnel.
In the centre JC and Keith are starting the task of drilling and bolting the extra support steels for the tunnel roof supports.
Peter Q is fettling on one of the windows. 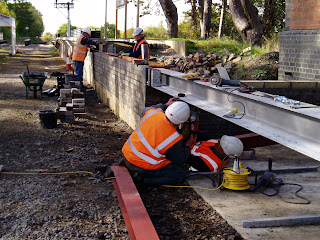 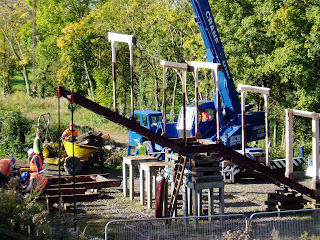 A later view of the car park sees the first staircase cut up and on the ground.
The crane is getting ready to start on the second. 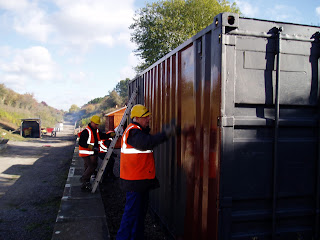 Pat, Steve and Peter S have now started top coating the ex Cheltenham platform build container. The problem is where we had a grey and a brown container and knew where to find things, we now have three brown ones so have had to resort to numbering to be able to find anything. 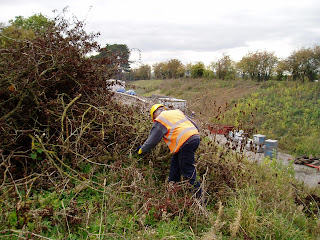 Through the station and up in the cutting Peter H continues with the clearance work. On the opposite side in the middle distance, the area cut down with the brushcutter can be seen, only about 300 metres to do. Then a start can be made on this side; it's like the Forth Bridge. 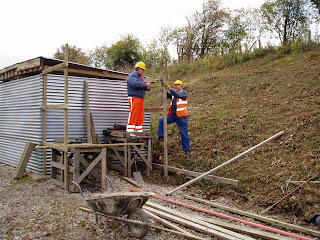 Mike S and Peter making a start on a timber store so that any spare timber can be kept dry and in a condition suitable for reuse. 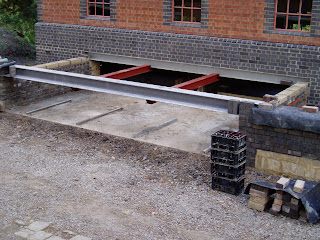 An end of day shot of the steels in place. The next stage will be positioning the horizontal steel shuttering which will then have the concrete roof of the tunnel poured. The southern wall received its first row corbelling today.


Today also saw work to fit some additional earthing fitted to the electrical systems. Work was continued on the grounds by Vic S and others and there were ongoing meetings for the planning and execution of this growing project.

Below are a selection of pictures taken by Jim H during the day of the staircase disposal. 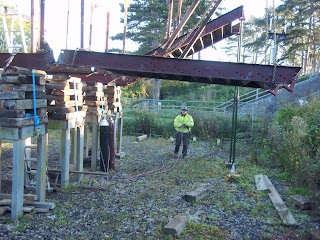 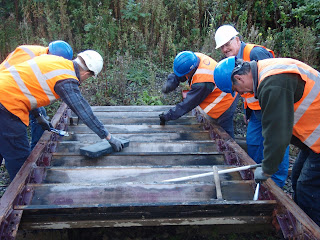 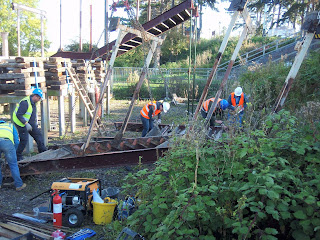 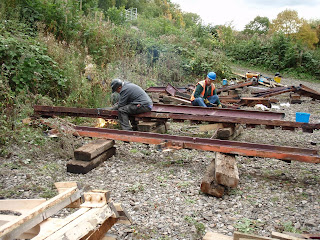 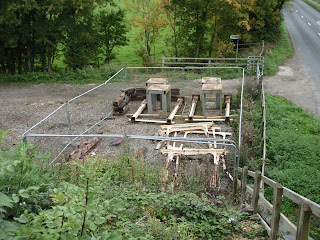 As you can see as soon as it was safe to work on a lowered section, volunteers continued stripping out the steps for reuse. The hoops that supported the roof were cut off to see if they could be reused and the steel cut up in to sizes that could be loaded into the dumper and then the scrap skip. The timber saved was taken up to the main site for storage. The four main front pillars will hopefully be incorporated into the new steps.