A dismal dark and rather damp day today weatherwise although the promised heavy showers failed to arrive. 12 volunteers turned up regardless of the weather prospects.
Vic and Robin were the first arrivals and before you knew it Vic had the first bonfire blazing.  Dave H assisted by Peter S, Phil, Keith, Dave B continued to feed this fire and Peter S started a second one.  By the end of the day they had managed to burn all the wood that was available.  We now need Brian with his chainsaw to produce some more bonfire fuel. 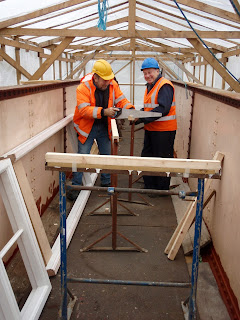 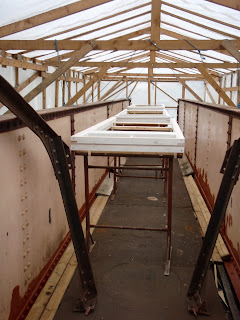 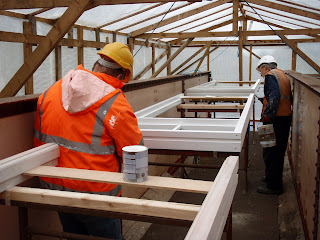 Meanwhile over in the Footbridge Tent, and in the dry, Peter K, Brian and Jim were preparing for door frame painting.  This involved transporting trestles from the signalbox and then fitting some timber battens to the tops so as to make sure all was nice and level.  Then assisted by Robin the first 3 frames were manhandled into position and painting by Peter K and Robin commenced.  As this is only primer it was possible to get one side done before lunch, let it dry and then turn them over and paint the other side during the afternoon.  We have 10 to do in total so another 3 will be processed on Wednesday.
John Balderstone came to inspect and measure the staircase nosings, with a view to re-using these. 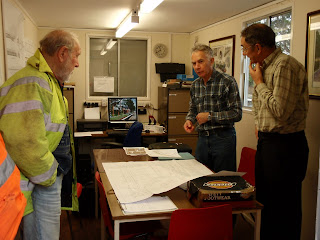 As he passed the site office he was called in to an intense car park planning meeting with Dave and Roger.  Further discussions with the local authority are planned for next week.

Unfortunately Ron who normally looks after our shop was unwell and unable to attend today.  Hope you soon recover Ron.  In his absence John B and Keith G stepped into the breach but it was a very slow day, probably due in part to the damp weather. Keith G also did some work on checking our COSHH paperwork,  Brian continued to tidy up and organise container 1 and Robin, Peter S and Jim rounded up some stray timber and re-located this to the partly constructed Timber Store.
Two groups of visitors came to see us today. The first to visit were the members of the folk music group known as The Rambling Boys and their wives, they specialise in American folk, Blue Grass etc. but also include British folk with a lot of humour and anecdotes along the way. 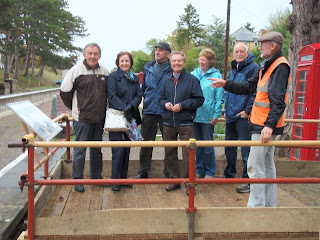 The Rambling Boys, Mike - double bass, John - banjo, Bryn - mandolin and Mel - guitar, have supported the cause at Broadway Station in recent years by giving at concern at the Lifford Hall, in the village, and donating the proceeds to the re-building project as well as playing at our open evenings. Last night's concert was well attended, as they always have been, and was also a special event because the "Boys" have decided to call it a day and make last night's concert their last.

I'm sure that everyone there last night hopes that they will come back one more time, at least!


In the early afternoon we were invaded by a sea of orange vests approaching from the south. 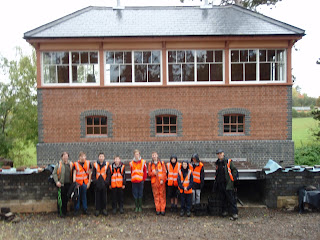 Jim H, Duty Officer for the day, was quickly on the case.  It turned out this was a guided tour of the GWSR Young Volunteers led by Mike Paying and Richard Scott.  Having given a lecture about entering a building site without signing in, wearing safety boots and hard hats, Jim finally relented and gave the party a guided tour of the site.  Despite the rain most of the party wanted to walk to the northern boundary having already walked from the rail head at Laverton.  They left to walk back to catch the train from Laverton to Toddington.
Finally an aerial shot of the two container roofs painted recently by Steve.  Don't they look good? 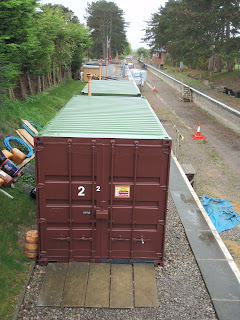