A dull drizzly day greeted the volunteers on Wednesday. This didn't stop 28 signing in through the day.

JC had organised the hire of a Bobcat for the day and was determined that we get our money's worth. First job was to position the RSJ that is to be the main support for the rodding tunnel. 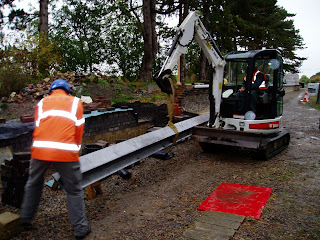 Jim and Tony steady the beam as JC edges it into place. 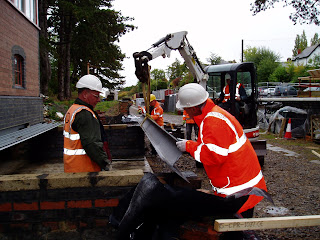 Bob, Keith and Tony making sure the beam is in the correct position. 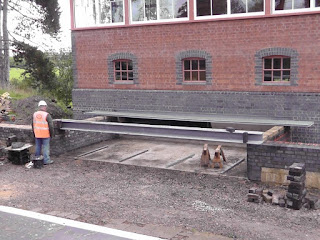 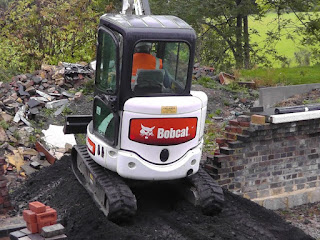 JC manoeuvres the Bobcat over the temporary ramp, built to get it over the lower courses of the platform wall to get into position for the next job.

This was to be some test holes on the site of the footbridge tower foundations. 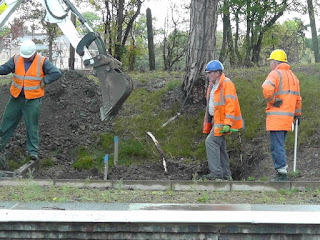 JC, Jim and Dave contemplating  the resulting hole, all was in order, hopefully. 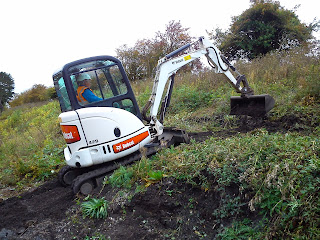 The next job was to re-profile the cutting where a ledge had been cut for the old footbridge. This proved to be a bit much for the Bobcat, with all JC's skill he just didn't have the weight to get the required grip. This job will have to wait until we have a bigger machine is on site.

Bobcat's final job was to lift some of the cut up
bridge towers into the metal skip. This is the final
piece of the tower to be recycled. 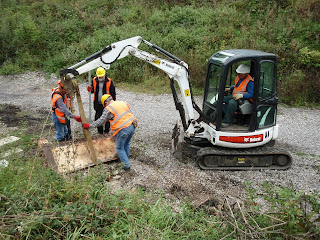 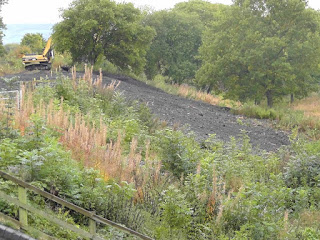 In the distance Bobcat's big brother can be seen working on the embankment. It had been digging trenches so that the engineers and surveyors could check the condition of the embankment. As they were back-filled the embankment was tidied up. 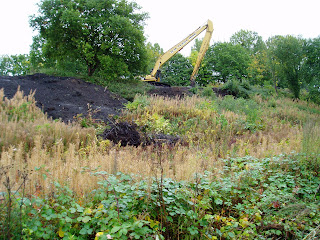 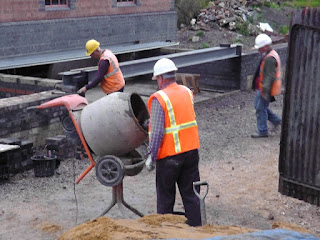 To catch up on other things happening, Paul mixes whilst Tony and Bob carry on with the brickwork for the closure of the platform in front of the signal box. Below is the job at the end of the day, the RSJ now looking part of the wall. 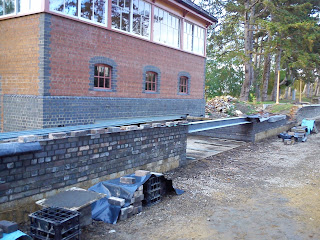 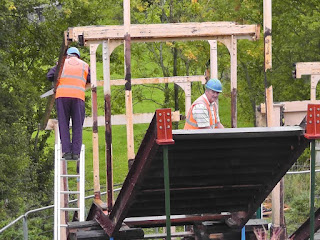 Down on the car park Dave, Brian and Ron carried on with the salvage of anything useful off the old footbridge stairs,

Below, Steve has just brought a load of salvaged material back to the main site for storage. Ron and Peter, (a new volunteer,  welcome Peter), having unloaded are covering up for the coming weather. 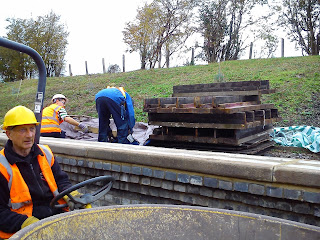 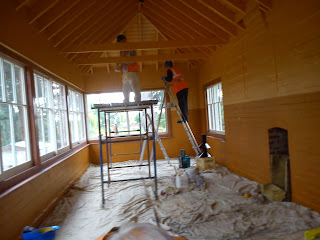 In the signal box Graham and Mike valiantly carry on with the painting, now on the roof gloss coat.

Below, a sneaky shot of Peter skillfully fitting the lock to the lever room door. 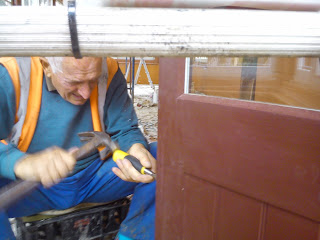 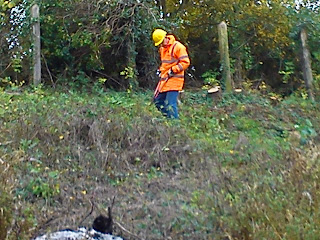 Further up the site Dave is continuing the clearance of the boundary line fence. 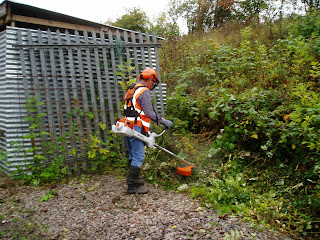 Terry makes a start clearing an area where a wood store is to be built. It's amazing the amount of new growth and how quickly cleared areas are reclaimed by nature. By the end of the day a large area of the cutting had also been cut down. 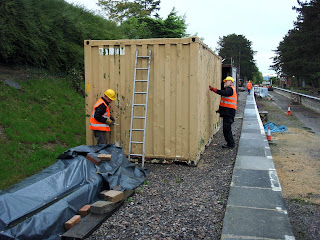 There were other jobs going on around the site with volunteers moving around to jobs as and when they were needed. Steve, Ian and Peter H round the corner preparing yet another container for painting. Vic was working on the station approach garden and Julie busy in the Goods shed with a steady stream of customers. There were also planning meetings and contractor visits, a lot of work being done by our Chairman and the committee  A good day had by all .