A purpose in life

A good turnout of 14 today on what was a dull but dry day.

Delivery of the door frames for the main station building had been promised and the container, recently transferred from Racecourse, was hurriedly prepared by giving it a thorough sweeping and it now has a purpose in life. 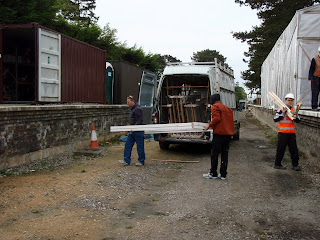 The van arrived mid-morning and was backed up to a point near the new container, just out of sight to the left. Paul Richards, the joiner who made the frames, with his assistant Bart start to off-load the new arrivals. New recruit, Peter S, carries a bundle of bearers to lay the frames on in their new home. 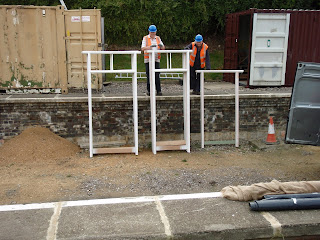 There were 10 frames in all and as can be seen they are of various sizes to suit different parts of the building.
Maybe Dave and Brian contemplating which one goes inside next or are they just accomodating the wishes of photographer Jim.
Dave later found time to modify the security camera system so hopefully it won't drop out so often in future. 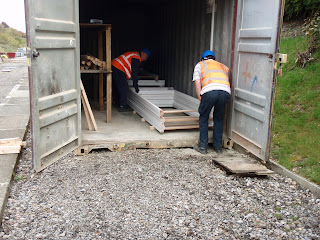 The new container is being used for the purpose that is was brought in for i.e. to keep wooden components for the station building secure and in the dry. 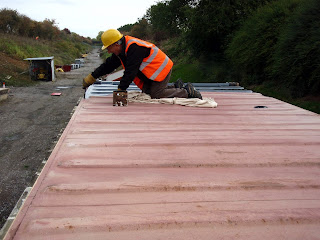 While on the subject of containers, Steve made the most of the still dry weather to progress the painting of the newbie. It seems that the roof had been somewhat neglected in its previous home so use was made of some recently re-discovered tins of bitumastic paint to seal it. Bitumastic is generally not the easiest the easiest stuff in the world to apply and this lot was no exception, somewhat akin to spreading treacle but with a paint brush! 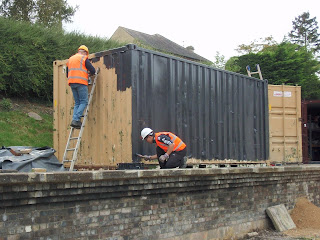 Meanwhile Peter K joined with Peter S to give the recent arrival a coat of undercoat.
While this was going on Peter Q finished fitting the door lock and furniture to the operating room door in the signal box.
It seems that Peters are now outnumbering Johns on Broadway site, at the latest reckoning Peters were leading 5 - 3. 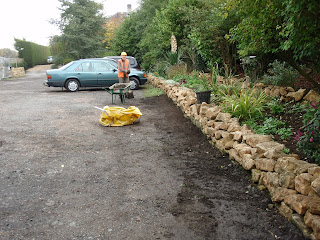 Vic's sterling efforts at keeping the flower border at the back of the station drive in good order have not had much publicity in recent weeks. The lack of cars give an opportunity to provide photographic evidence that he is still keeping it up together despite having had a few weeks away on holiday. 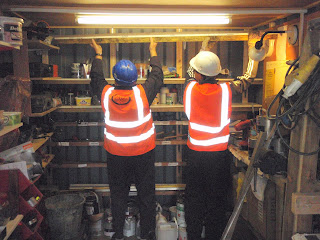 After helping out with the door frames our newly appointed storeman Brian and Peter S applied themselves to some emergency repairs of the shelving in the recently named container 1, the tins of paint were taking their toll and the shelves were beginning to sag.
It seems that the containers are being numbered to the reverse sequential convention, number 1 being at the right hand end and number 3 at the left. Must be the way the Midland would have done it! 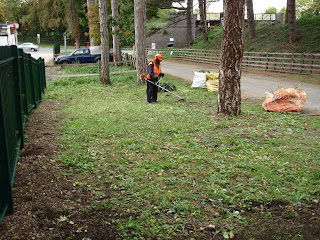 Not satisfied with his work on the shelving Brian later donned the protective gear to give the area around the bric-a-brac shed an overdue strimming. Jim helped by clearing 5 bags of arisings and cutting up a dumped tree trunk.
The improved outside appearance along with the updated entrance notice board, courtesy John B, no doubt attracted additional customers and led to Ron having a busy day in the shed. Well done Ron. 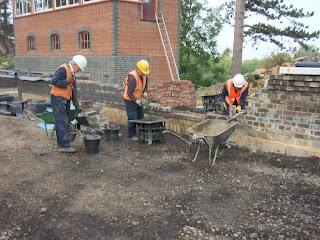 Last but not least, Tony led a team to start filling the access gap left in the platform wall. Tony laid the facing bricks and Keith S laid the backing bricks. This gave Robin the opportunity to be mixer man for the day while, out of sight, Keith G continued to work on the drains for the rainwater.
Not forgetting Dave and Peter S working on the on-going tread stripping on the staircases it was another superb effort by all on site.