Another good turnout today with 23 volunteers on site


﻿
One of the first jobs being to move blue and red bricks into position by the signal box. These were some of our reclaimed bricks which match those in the platforms already built. Steve, Ron, Terry, Pete and Rod moved about five pallets of bricks into place. 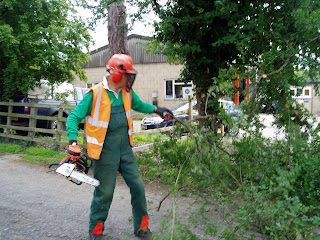 Down on the station drive Brian was making a start on removing one of two large Hawthorns' that had self seeded amongst the Corsican pines. This had to be carefully done as vehicles use the drive to reach the old railway cottages. 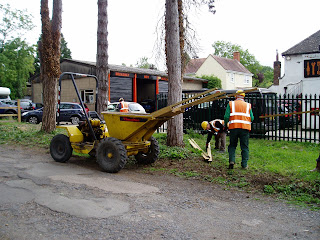 Steve used the dumper to remove all the waste material to where it could be safely burnt. The old wooden fencing was also removed, for storage, as the new steel paling fence that is replacing it, continued to be erected by Dave, Mike and Chris in the background. The drive now swept and looking much tidier.
Meanwhile down on the car park area Roger and Brian and later Ron continued with the retrieval of the wooden steps from the bridge stairs. Any useful timber being taken up to the main site and stored under cover. 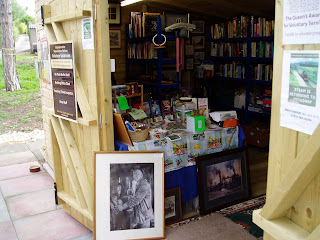 On the way back to the main site I noticed some of the goodies for sale in the "Goods Shed". Julie who valiantly mans the shed for us every Wednesday would gladly take some money off you. The shed is also open on Saturdays. 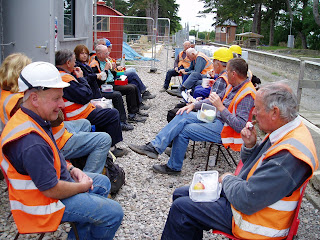 Some of the happy band of volunteers enjoying a spot of well earned lunch and a chat. 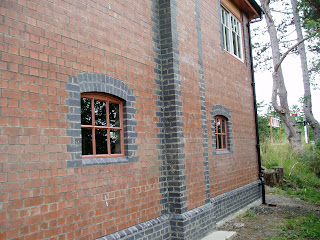 Today also saw the fitting of the last window in the signal box, seen in this view of of the rear elevation. This also shows the detailing around the locking room windows. 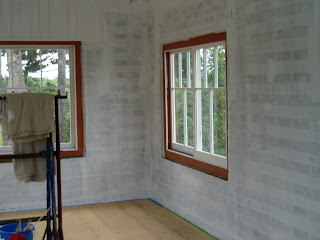 The same window seen from the inside. The first coat of paint on the walls by Graham really brightens the room, hopefully soon to be graced by the levers and other equipment waiting in S & T stores.
We had some visitors from Severn Valley Railway today especially to have a look round the new box. 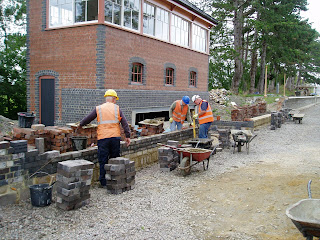 On the outside Clive, Tony and John continued with the brickwork. By the end of the day they had completed two full courses on the south side of the tunnel and a course on the northern side. It wont be long before the RSJ that supports the platform wall over the tunnel can be put in place. 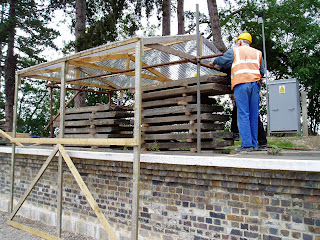 The two Peters started the refurbishment of the bricklayers shelter, damaged by a gale, which will allow work to continue when more inclement weather arrives. 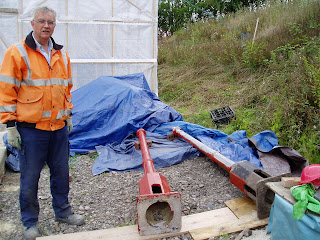 Jo, sans hat, because he was in a safe place and bent over painting continued with the refurbishment of two lampposts. 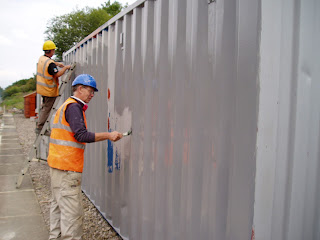 Graham had a change from painting the signal box by painting another box, a big one, our tool container. This had been getting a bit tatty and this is all part of the ongoing maintenance of the site. More of which, weeding was being done by Martin on Platform 2. Third time this year I think, it will be good when it has finally had its tarmacadam. 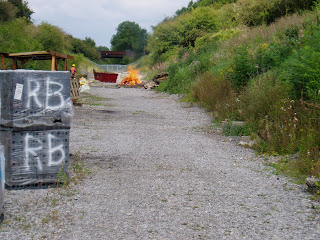 The previously mentioned tree and a lot of other cleared scrub, old rotten pallets were burnt. Today being a good day as everything was dry and little wind so we didn't annoy the neighbours. Pete and Terry found it was a job more suited to a frosty day.


The two pallets of bricks, marked RB in the photo above, are a reminder of Ron Brislin who passed away recently. Ron was one of the volunteers that started the building work at Broadway. He laid the blue brick facing on the first section of platform 1 and continued to lead the construction for several years until he took over the running of GWSR's building services based at Winchcombe. He has been involved in too many projects to mention here, suffice to say he was a pleasure to work with. He had a wicked sense of humour and was always ready to share his not inconsiderable knowledge with those of us less skilled. RIP Ron you will be missed.