An exceptional turnout for a Saturday with 18 volunteers on site 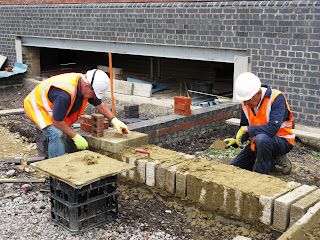 The large number volunteers of allowed many of the tasks to be continued including the wall for platform 2. Keith is using sloppy mortar to fill the gaps between the vertical blocks laid last week, just showing us that another potential brickie waits in the wings. Clive is starting on the last course of 4" blocks on the northern section of the platform wall. 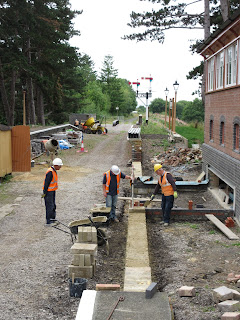 Clive and Tony are checking that the levels are correct on the blocks already laid. Keith, meanwhile, patiently waits the call to mix the next barrow load of mortar but with trowel in hand, just in case. 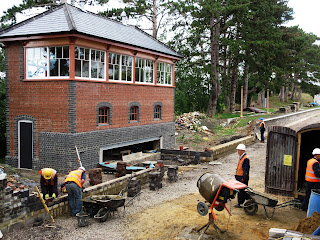 The blocklaying completed on both north and south ends the brickie's turned their attention to getting the first courses of bricks down. This had obviously caused some interest on site as others had come along to see for themselves, Brian taking a break from his storekeeping duties.   The door frame for the locking room door stands out at the moment but it is planned to top coat it in dark stone like the window frames. 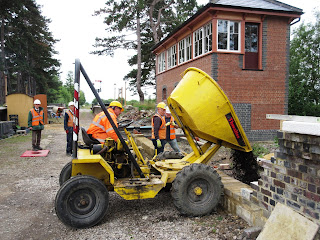 Steve was dumper driver for the day and spent the early part bringing in some additional filling for the back of the platform walls. 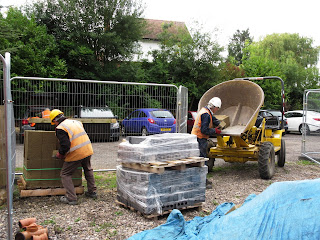 And moving concrete blocks around the site with the assistance of Robin. 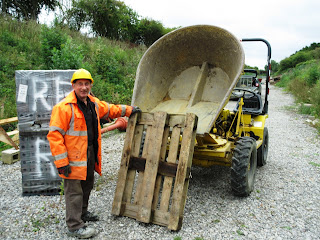 Later, the opportunity was taken to collect the wooden pallets lying around after the removal of the surplus bricks. These pallets had been on the ground stacked up with bricks for a few years so were way past their best and only fit for burning. 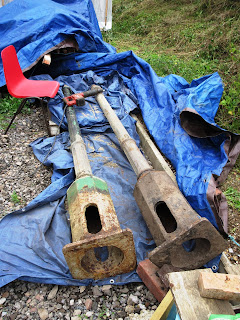 In between taking some action shots for the blog Jo spent the day needle gunning and wire brushing the two lampposts that we bought at auction in July and these are now ready for a coat of primer (note to photographer, move chair out of the way first). The ground disc signal that was acquired at the same is now having some TLC lavished on it by S&T. 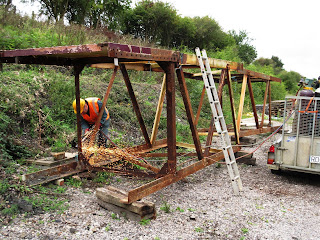 We are fortunate to have Peter among our number who has the skills and equipment to carry out specialised jobs like oxy-acetylene cutting. He is tackling one of the towers from Henley in Arden footbridge, the second tower is waiting in line. 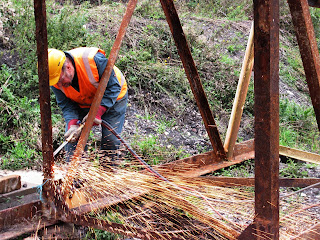 The towers were unfortunately torched at the base when they were removed from Henley so after some deliberation it was decided that the best option would be to construct new towers which would also give the opportunity to increase the height slightly in line with the structural engineer's recommendation. Also on the footbridge; work continued on stripping the remaining wood from the staircases to a point where this is virtually complete, it is planned to remove the staircases by month end. 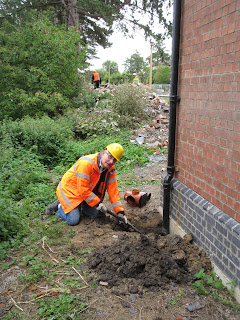 Returning to the signal box, at the rear of the box Keith (not the Keith of mortar fame)
dug the hole and fitted the second drain for the rain water. Both drains have now to be piped to the water course at the bottom of the embankment 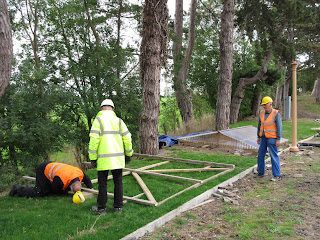 Under the guidance of out carpenter Peter, seen on the right, a start was made on constructing a bricklaying shelter. This is not intended to be a portable rest room so that the brickies have somewhere to put their feet up and drink tea, although thinking about it! No, it will come into its own when the weather turns more wintery and it will then stop the worst of the weather getting to the brickwork and allow bricklaying to continue whenever possible.