Only 7 volunteers at Broadway today so only a limited number of jobs undertaken. 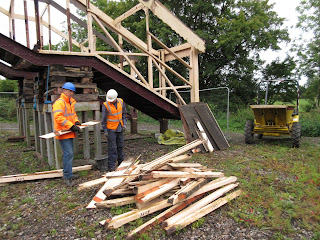 One of those jobs was the footbridge because of the end of September deadline to get both staircases dismantled and removed from site. This cannot be undertaken in a haphazard manner because of the need to preserve some of the woodwork as patterns for the replacement. Roger and Graham are discussing their strategy before getting stuck in. 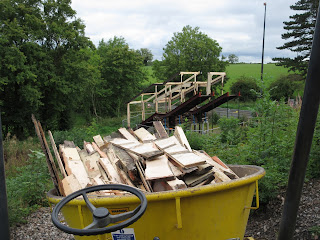 This seems to have paid dividends as the dumper, with Jo at the helm between photographic assignments, had been filled and was reversing up the slope to trackbed level. 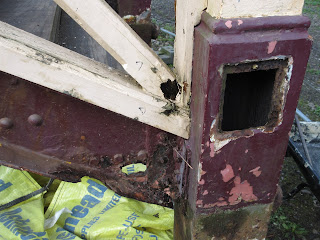 Corrosion, as in this instance, is more widespread on the structures than first thought and is the reason why the staircases have been condemned. At the moment it is the intention to re-use these square cast columns (shown here with the rectangular aperture) which are located at the platform end of the stair. 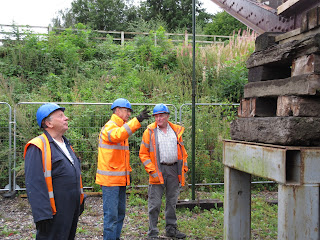 Jim gets the latest from Roger and Brian surveys the task at hand before the pair of them set to and give a helping hand on the most important job of the day. Brian had also spent some of the day, with Steve, painting the roof of the container. 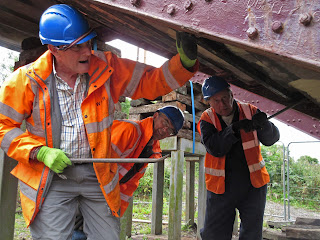 The staircases need to out of the way to allow contractors on site to carry out investigations into the condition of the embankment between Station Road bridge and Childswickham Road bridge before further planning of the car park can take place. 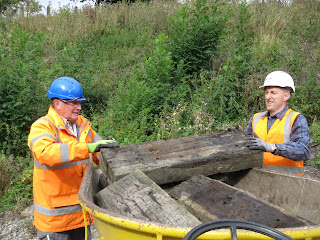 Earlier in the day Jim and Graham had toned up their muscles by lifting some old sleepers from the dumper to the worksite. The sleepers were being used to give additional support to certain parts of the staircases. 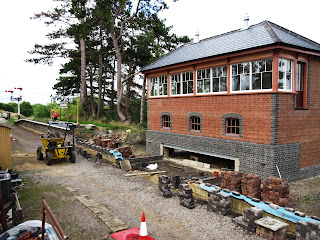 Bricklayers were absent in totality today due to other pressing commitments
Pat, seen in the background, was doing the vital and important job of keeping the weeds at bay.
Posted by Unknown at 22:25