A tale of two mixers and a brilliant job up aloft.

There were 27 Volunteers on site today, another excellent turnout

The weather was kind to us so the main job of the day was to complete the concreting of the rodding tunnel floor between the platform edge and the front of the signal box.
John C had earlier taken delivery of 4 tons of ballast and it was decided to commission two mixers to do the job. 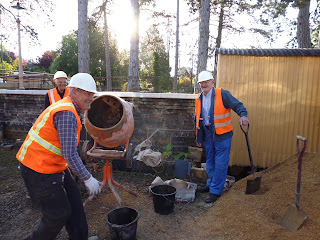 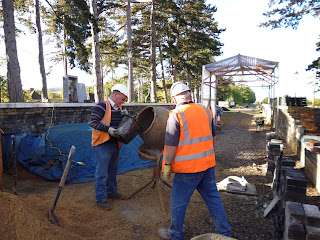 The second team consisted of Bob W, Clive and
Peter H (off camera). 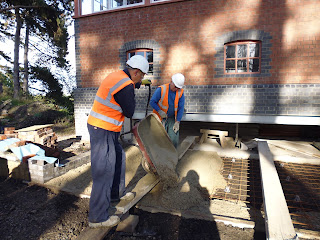 Keith unloading one of the many barrow loads of concrete required. John C is ensuring the load gets tipped in the correct place and is spreading the mix evenly over the reinforcing wire mesh. 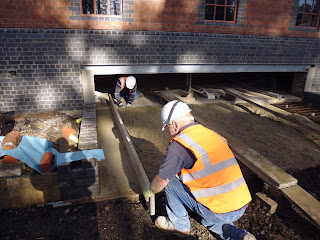 When the teams had mixed 4 tons of concrete it was time to begin to level it. Clive and Bob W in the signal box use a scaffold board to start the levelling process 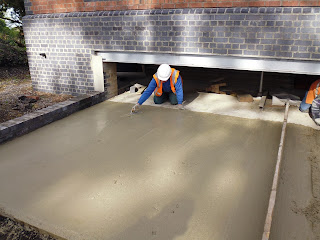 Well over half of the tunnel is now levelled off and John C adds the finishing touches.

A further 2 tons of ballast were ordered from Fairview and Richard arrived very promptly before midday so that the job could be completed. 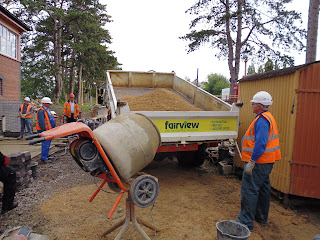 Two tons of ballast arrive and are tipped expertly in the right place in front of the mixer. 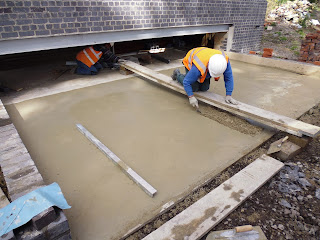 Once all the area had been concreted and levelled metal supports for the plate that will cover the entrance to the tunnel were inserted into the concrete; this in turn will support the pulleys and rollers for the signal and point mechanisms 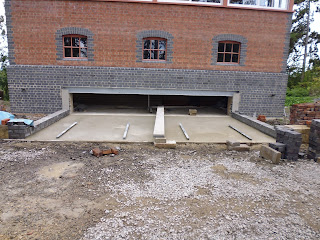 The finished job with the 4 metal bars inserted into the concrete. An excellent day's work by
all concerned.

Up in the signal box work progressed steadily applying the sandstone undercoat to the roof timbers and the upper areas of the walls. Terry provided a very welcome extra pair of hands for this task. 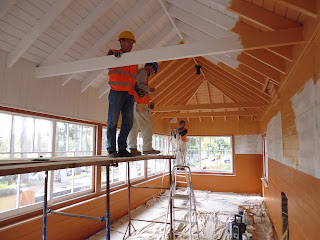 Graham, Mike and Terry set about undercoating the signal box roof. By the end of the day nearly all of it had been completed. 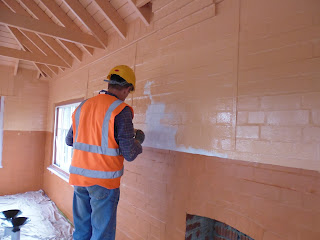 Terry finishes off the last section of the upper wall in sandstone undercoat. The interior of the signal box really does look superb and will look even better when the final gloss paint is applied, a brilliant job. 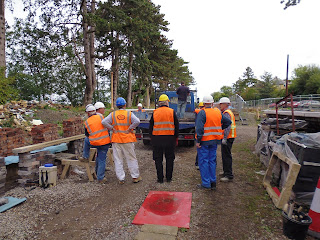 Just before lunch we took delivery of the metal RSJ beam which will go across the track side entrance to the rodding tunnel. No mechanical assistance was available to offload it so it was decided  to muster sufficient volunteers to do it manually. 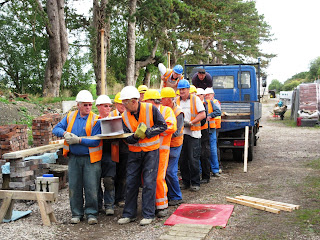 Around 16 volunteers, 8 on each side, with wooden lifting beams tackled it and it was successfully offloaded and placed on two trestles. A similar method of operation may be required to place it in its final position. 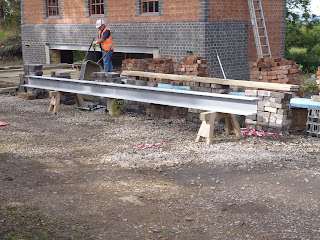 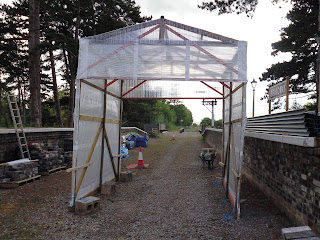 The beam safely on the trestles ready for when it
will be placed in the platform wall at the entrance to the rodding tunnel. Bricklaying should start again soon so the beam will be in position the next few weeks. .

The bricklaying shelter in now complete ready for the winter weather, Peter Q, Peter T and Dave worked away at it for most of the day. It will be securely tied down to prevent it being damaged again by the winter storms. 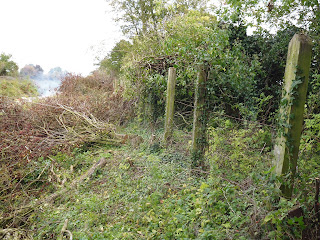 Vic, Roger J and Ron (in between meetings) worked away on the eastern boundary of the north cutting. The fencing here is in a poor state of repair due to trees and undergrowth being allowed to encroach over it, over many years. Much work will be required here in the months ahead.
Owing to unforeseen circumstances, the cutting up of the footbridge staircases did not take place but is now being rescheduled for a couple of weeks time.

Roger B our Chairman returned to site today after his  holiday so the admin office was very busy all day with meetings and phone calls!

A very busy day and much was achieved by the excellent team on site.