There were 10 Volunteers on site today.  The weather started dull and misty but by lunchtime the sun had broken through and some useful progress was made by the end of the day. 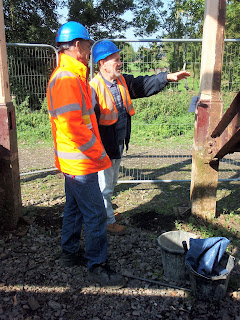 John B, the railway's bridges engineer, spent most of the day at Broadway discussing next Wednesday's staircase demolition with Roger and Jim. The plan is for the staircases to be carefully craned onto their sides so that any remaining wood and the saveable/ re-usable cast iron can be removed and then they will be cut up where they lay. 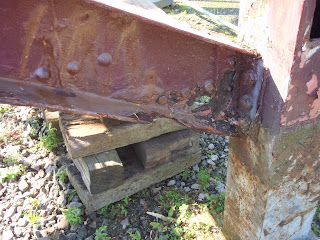 This is the reason why they have to go, the rust has eaten through the metal. The corrosion on the inside of the stringers where the steelwork was hidden by the wooden treads which trapped the moisture is just as bad and of course is along the whole length of the stringer. 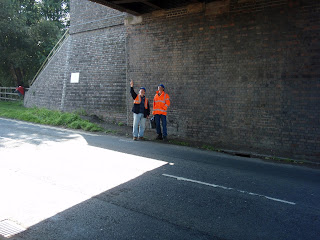 While "John the bridge" was on site he took the opportunity to have a look at the most recent bridge strike on Evesham Road bridge which happened last Saturday. Fortunately two volunteers heard the bang and were close enough to get some details before the vehicle was driven away. Apparently the noise of a bridge strike is an unmistakeable sound. 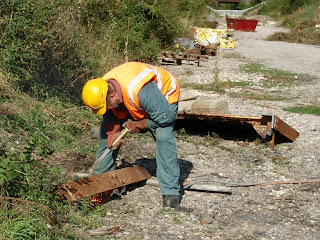 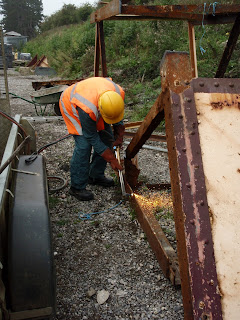 The end is nigh for the two main supporting towers for the footbridge. At the north end of the site Peter was busy cutting up the two main supporting towers which unfortunately are too badly rusted through to be reused. Phil and Jim assisted and barrowed the cut up lengths to the skip which is now full. By the end of the day only the two blanking panels remained to be dealt with. 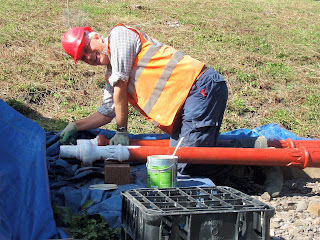 Lamppost Jo as you've never seen him before! The sunny weather today provided an excellent climate for painting and Jo took the opportunity to apply the first coat of undercoat to the lampposts that were acquired in July. 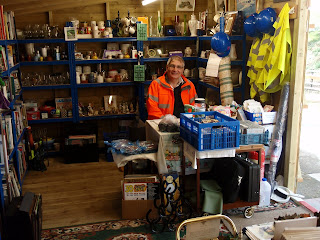 Keith looked after the bric-a-brac shop and remained remarkably cheerful despite a low footfall during the morning. Things did pick up a bit after lunch however. It must have been the sunshine which brought them out. It was glorious! 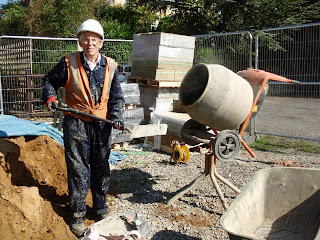 And now for something completely different?; it was for Robin today! An opportunity to try his hand at mixing the muck (or mortar or compo or whatever it might be in your neck of the woods) which he did very well after some initial tuition about what the strength was and what the consistency should be like, "creamy" was the word used I think. 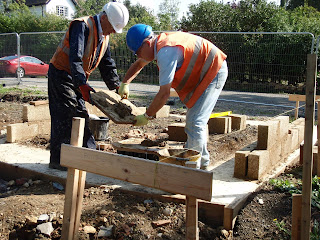 The point of all the mixing was to enable progress to be made on the main station building. The morning was spent building the remaining internal walls up to finished floor level and during the afternoon the two brickies working today concentrated on bringing the south end external wall up to the same level and this was achieved just before close of play.
John, our Construction Manager, said he was very satisfied with the day's work which is good to hear
Posted by Unknown at 10:44