A productive day and the return of the live camera

Wednesday 2 Sept 2015
Twenty seven volunteers on site today and the weather was kind right until the end of the day. 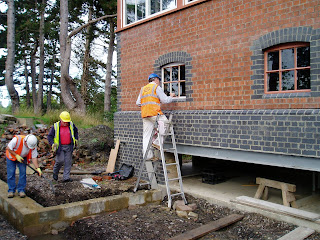 The start of the day saw Graham painting the locking room windows and Clive & Bob making up the ground level to improve conditions underfoot to make it easier to lay the blocks. Clive is standing on the footing of what will be the platform wall. The return will be the support wall for the rodding and wires tunnel. The area in the foreground will be concreted in the near future. 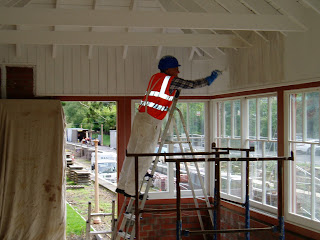 Mike finishing off the undercoating of the signal box roof. Only another undercoat and the gloss to go! 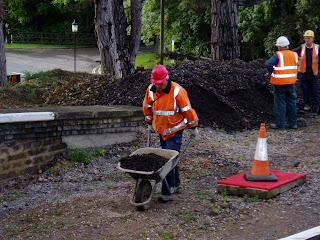 As the dumper was temporarily blocked in, Keith, Jo and Rod barrowed the required ballast to level up the ground by the signal box tunnel. JC and Tony have a breather waiting for the next barrow to load. Pete, Clive and others spread the ballast when it arrived. 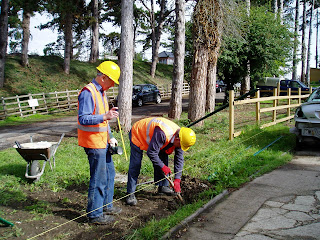 Here Dave and Mike make a start putting up the final fencing on our boundary with the garage next door to the Station approach road. Why is there always a big lump of stone right where the post has to go? 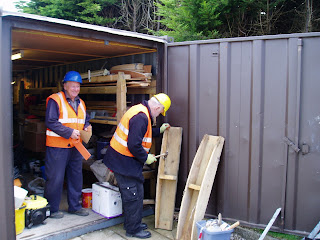 Brian looks happy as he and Ian carry on trying to sort out the storage container, loaded with loads of stuff we kept "just in case". Work was also done preparing the other container for repainting. 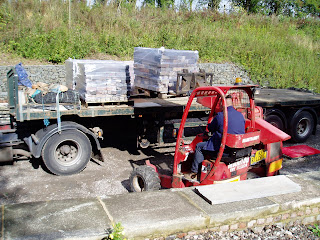 We also had a visit from Ronson Reclaim today, an architectural salvage company which has purchased some of our surplus bricks that volunteers had salvaged from various places over the years. A useful addition to our coffers helping the work to continue. Here the lorry driver uses its own fork lift to load bricks stacked and wrapped by his colleagues and Steve who supervised the operation most of the day 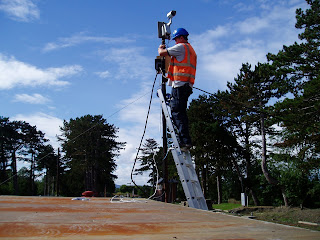 Dave meanwhile was moving one of the security cameras to cover the new station building. The live feed from it can now be seen above the Total Pageviews. This should now enable you to follow the progress of the build. At the moment emphasis is on the signal box tunnel, but work will continue soon on the station. 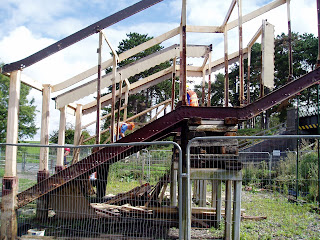 Down on what will be the car park you can just about see Gordon and Chris, helped by David, Jo and Roger reclaiming what is useful from the footbridge staircases. The remains will be cut up and disposed of to allow heavy machinery to start regrading the embankment later in the autumn. 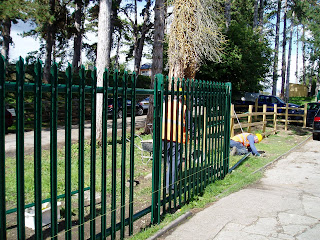 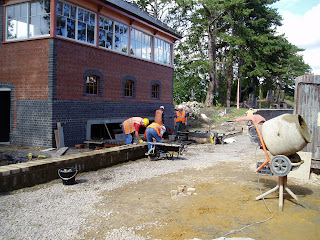 Another later shot shows the progress made on the platform wall, many blocks and blues laid. 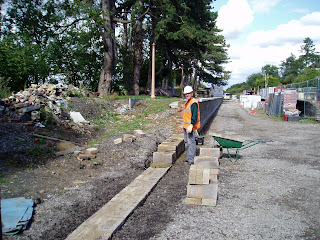 Even our new chairman Roger got his trowel arm working again! 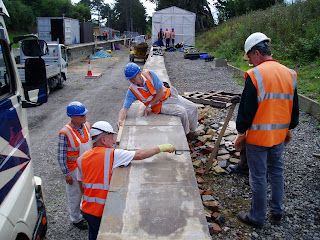 Mike, Clive, Graham, Roger and Steve after completing one of the last jobs done today.
This was fitting the final slab which had been cut to fill the gap at the top of the ramp. Quite a struggle as we had no hoist so it was manpower. Other jobs were going on throughout the site including more clearance on the boundary fence in the cutting. A start was also made on strimming the summer growth. 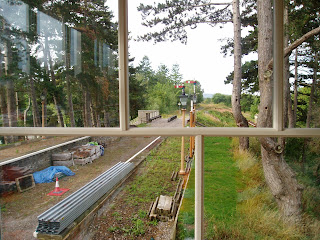 Finally the signalman's view over the Evesham Road bridge towards Toddington.
Posted by BAGBLOG at 09:43