Another block in the wall 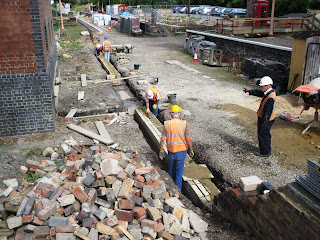 Work continued today on the footings for the platform at the front of the signal box which is joining the two sections of platform 2 completed some time ago. The second level of blockwork was laid along the wall nearest the track. Peter and Clive are working on the nearest section with encouragement from Robin. Robin no longer has any bricks to clean (as promised earlier, the brick situation now confirmed). 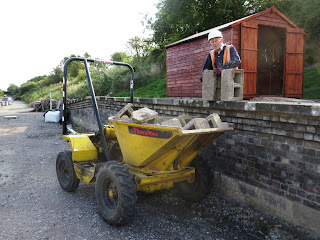 Only a few of the hollow section blocks were in the vicinity of the building site at start of play so Robin and Jo spent a an hour or so rounding up any that had escaped the net previously. Robin looks to be on his knees, understandably, they are darned heavy! 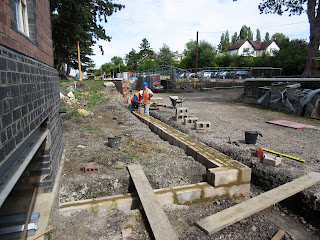 Hollow concrete 9 x 18 blocks were used on the trackside with the hollows later filled with concrete and a double layer of solid 9 x 4 blocks on the inside. John & John have nearly finished the northern section and the first row of blocks on the return wall can be clearly seen. The return wall was brought up to the same level by the end of the day. 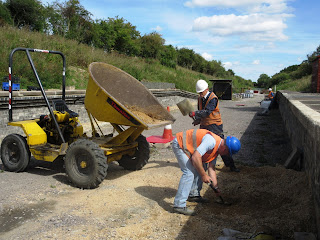 Before the hollow concrete blocks could have their hollows filled some of the blocklayers had to scrape up any surplus ballast lying around the site so that a few mixes could be made. Where's that dumper driver when you need him? 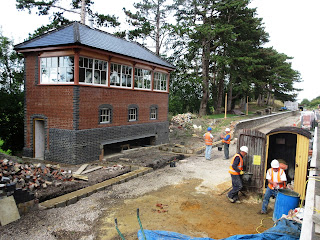 Clive and Keith cleaning up at the end of the day while one John explains to the other how the next phase of the operation with pan out.

The signal box locking room door had been primed before close of play on Wednesday and was ready for Peter, our highly esteemed carpenter, to fit today, which he did before starting on the blockwork. 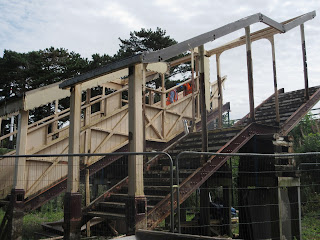 Another area of activity today was the footbridge steps. These are being stripped to their woodwork to allow certain sections of the wood to be used as patterns for replacement. The steelwork of the staircases has been condemned because of the severe corrosion in several places. Some parts can be saved and re-used, notably the two columns at the bottom of each staircase nearest the camera. 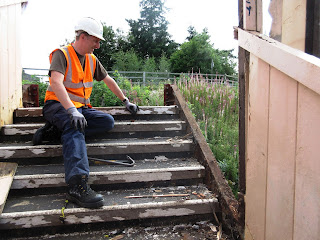 Graham is obviously contemplating the next step! 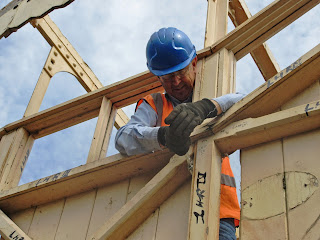 While Roger seems to have developed some affection for the old bridge. 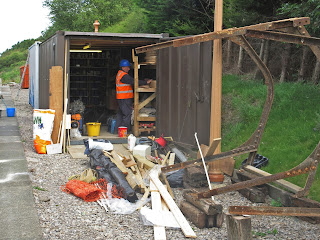 Brian is continuing with a mega clean up and sort out of the brown container. He has found some things that we had forgotten were there while on the other hand some things we thought we had have not come to light yet. Interesting! 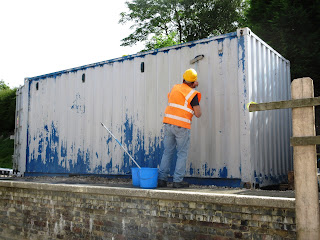 Peter is doing a sterling job cleaning the grey container ready for painting. If he rubs hard enough and long enough we may be able to re-christen it the blue container. 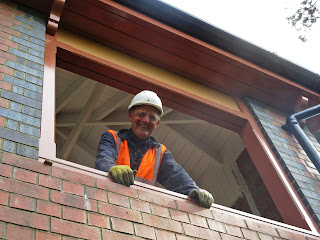 A view from the (rear) window. Keith looking pleased with his days work
Posted by Unknown at 11:05