Another hot day in Broadway but still 13 volunteers signed into work. 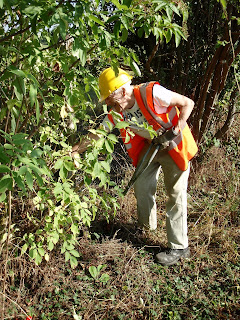 Vic as usual was the first to arrive and set about clearing access to the western fence line where we are trying to assess the extent of the work that needs doing. He was later joined by Peter K, Keith G and Remmie who is a friend of Jo and who visits us every year to lend a hand. Vic is nearly half way along and so far reckons that around 80 of the 110 posts checked so far will need replacing. Bit of a Fourth Bridge job in the making!
John C and Steve then marked out the centre line of the foundations
ready for the excavator to start on Monday morning. 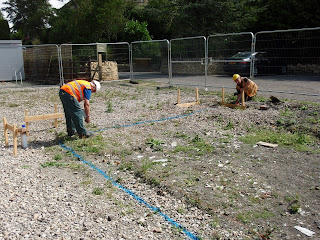 We have a full weeks work scheduled to dig and hopefully concrete all the foundations for the main building on platform 1. The plan is to dig the foundations nearest the trackbed, being marked in the picture below, and concrete this section before excavating back towards the station drive. This will make life easier for the readymix lorries. 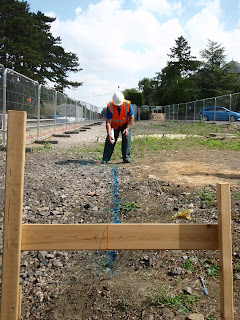 The site should look a lot different by this time next week. 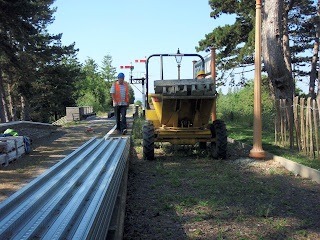 The next job was to move around 70 concrete troughs from the north end of the site where they have been in store since being recovered from Honeybourne following the Cotswold line re-doubling a few years ago. 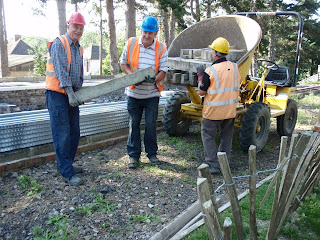 These will shortly be laid in position behind platform 2A, between the signalbox and the Evesham Road bridge, so the S & T department can run their cables in them.


John B and Peter K attached the ragwort in the car park again. 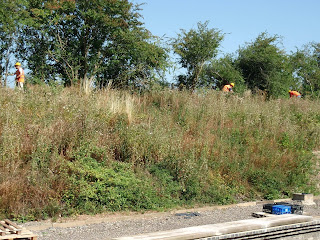 It has just about all been dealt with in that area, but there is plenty still to go at on the embankments to the north of the station platforms.


Ron B manned the Information Shed all day but the footfall was rather light, probably due to the time of year and people being away on holiday. However he did report a lot of very favourable comments on the signal box which has now had all the front windows fitted. So, no excuse needed for another shot of the box. 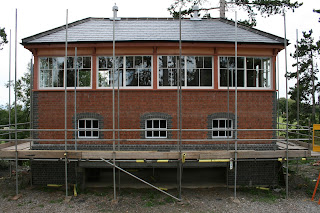 We expect to be able to take the scaffolding down after Wednesday and see the finished product in all it's glory.
Finally we were pleased to have a visit from Gary Boyd-Hope and his family who were enjoying a day on the Railway to mark Gary's 40th birthday. Gary is currently the Industrial News editor for Steam Railway magazine. John C had arranged a little presentation to mark the occasion and Gary duly obliged by laying a commerative brick in the, still to be completed, platform 2 wall. Feel free to give Broadway a mention in a future edition Gary!!