12 volunteers today were on site today working in some unusually hot weather. 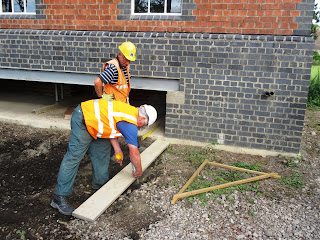 The first task was to mark out the footings for the signal box "rodding & wires" tunnel. Footings are needed on each side of the large hole in the front of the signal box to enable brickwork to be built up to the level of the RSJ's, seen here, the brickwork will support the roof of the tunnel which will carry the completed platform above it. 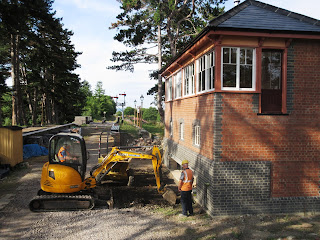 John on the digger, Tony on the shovel and Jo, multi-tasking as dumper driver and camera operator, set about excavating the footings for the Honeybourne end of the tunnel first. 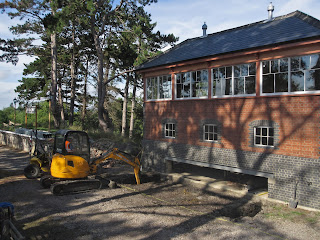 When that was complete the digger moved to the Toddington end to do the same there and also cleared away the ballast between the two sets of footings to allow a 100mm thick concrete pad to be cast. This will have steel "C" channels built in to it to carry the rollers for the point rodding. 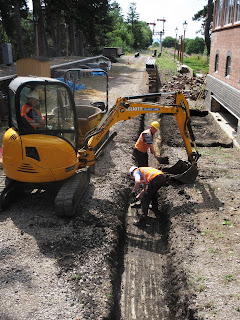 The final part of the job for the excavator was to dig the footings for joining the two parts of the walls for platform 2, known to the volunteers as platforms 2A and 2B. This view helps to put it all into context. After the digger had completed its other jobs on site John and Tony were able to set out these foundations for the concrete pour. 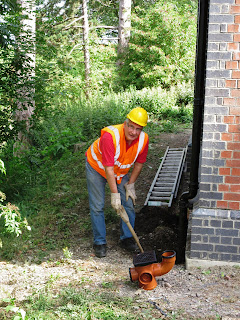 While there was much activity at the front of the box there is still work to be done at the rear. Keith was busy on the next step of the rainwater management. Not lucky enough to have a friendly JCB handy, pick and shovel were the order of the day to dig out a pit for the drain seen in the foreground. This will be part of the system to take the rainwater to the ditch at the bottom of the embankment 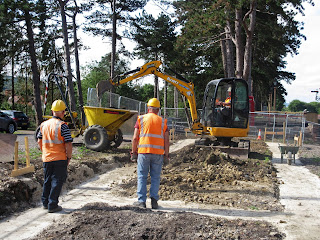 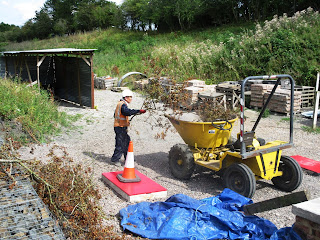 Robin has not featured in the blog recently but has been working hard nonetheless on brick cleaning until this week an opportunity for something completely different by moving the thorn clippings from the recently cleared fenceline. 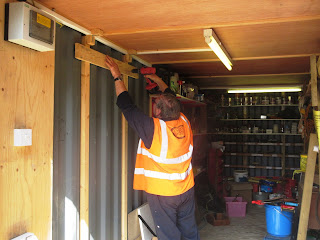 Brian has quickly got stuck into creating some order into the stores container. This container had become a bit chaotic so his experience in this area will very welcome. 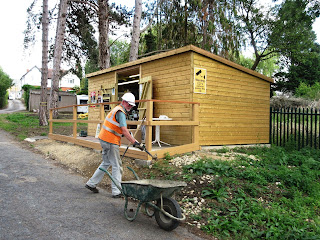 John B did some more work to improve the appearance of the bric- -brac shed and its surroundings by removing the rubble along the front. 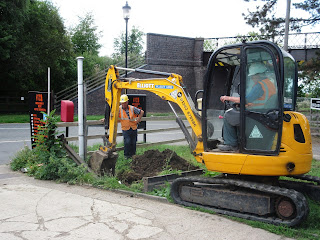 One final job for the digger was to remove a particularly difficult fence post support made out of old bridge rail, this was at the Station Road end of the site next to the garage. The fence post support had resisted many of the volunteers attempts to move it manually so it left only one option. The plan is to erect green paling fencing here and the support has been in the way. 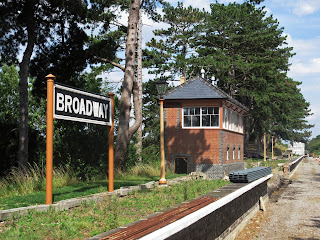 To end the blog this week, a particularly pleasing view of the signal box and platform 2.
Posted by Unknown at 11:31