There were 25 volunteers on site today.

When we arrived on site today we found the footings at the front of the signal box, cleared by the team last Saturday, had filled with about 2 inches of water following the heavy overnight rain!  Also the two footings for the side walls of the rodding tunnel had a large amount of water in them and needed some more finishing work. 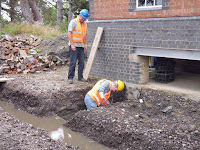 Here Rod is finishing the left hand side footing for the side wall for the rodding tunnel. The flooded platform footing is in the foreground. 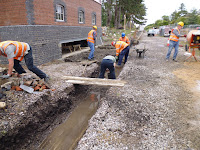 The footings were cleared of water by using buckets and creating barriers at several location to contain the water. 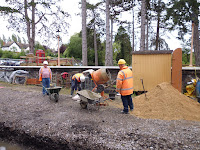 John C calculated we needed 3 tons of ballast to complete the footings and this was delivered by Fairview first drop this morning. Two teams of highly motivated volunteers set about mixing the concrete using 2 mixers with 3 people on each. One shovelling, one on the cement/water and one on the barrow. 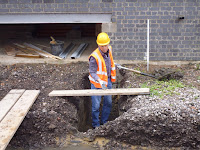 Terry cleared the excess soil in the return wall footings and then supervised the pouring. Now ready for the first barrow load of concrete. 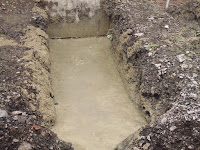 The completed footings for one of the return walls.

John C's calculations proved to be spot on and with 3 tons of concrete mixed in just one and a half hours and the footings completed only a very small pile of ballast remained. 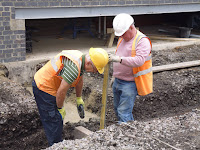 Once the concreting was completed and the main footings were clear of water
Bob and Tony set about the line for the blocks to be laid. A team positioned
the blocks in piles of 10 ready for block laying to begin. 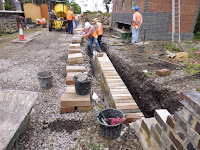 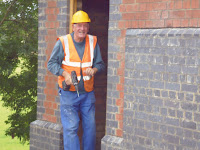 Our master carpenter Peter Q set about installing an FLB style door for the locking room.
By the end of the day the door had been trial fitted and was in the paint shop waiting the painters attention. 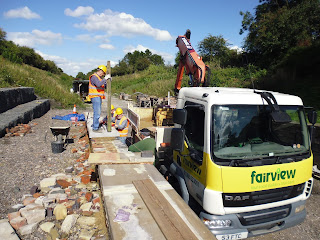 After lunch Richard from Fairview managed to fit in 2 hours work for us for more slab laying on the slope on platform 2C. Terry is tapping down a newly laid slab with Rod in the background checking the alignment. 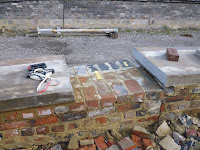 Just a small gap remained waiting for a slab to be cut and shaped by John C on Saturday. It is hoped that this last section can be manoeuvred into place by hand thereby completing platform 2C. 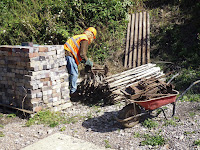 Martin and Brian continued clearing the fence line on the eastern boundary north on 1C. Martin is seen here with some of the old fencing and the metal chute used to bring it down from the cutting. 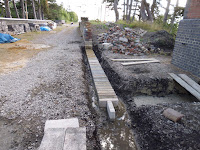 At the end of the day the second section of blocks, extending as far as the return wall, is seen here looking south.

On other fronts Brian  Peter T and Dave continued with re-organising the storage containers by fitting more shelving and moving the tools so that they are more accessible.

It was indeed a very productive day by a team of dedicated and enthusiastic volunteers.