It was truly a very memorable day at Broadway today as two very significant milestones took place. There were 21 volunteers on site.

The first really exciting thing to happen was the laying of the first block for an internal wall on the station building foundations. 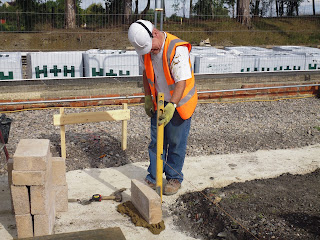 After getting guidance from John C, Clive is carefully laying the first block and getting it nice and true with the spirit level. 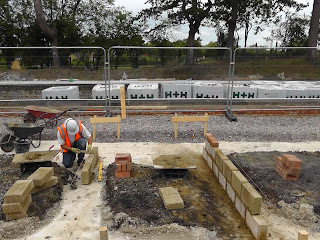 Clive again taking great care to lay more blocks. By lunchtime great progress had been made but then rain prevented further work.


The other significant event today was the signal box having the scaffolding removed and being seen for the first time in all it's glory. 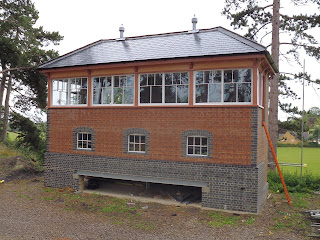 It really looks superb and is a great credit to all the volunteers who have worked on it so tirelessly over the past few months. 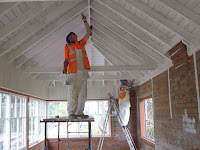 Inside the box Graham and Mike continued with the painting of the internal roof, now applying the white undercoat. 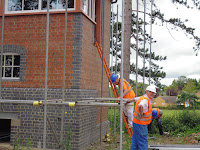 The scaffolding was removed by Tony, Peter Q and Dave. It was quite a difficult task and had to be undertaken with great care. Here Peter Q is sizing up the job.

Great progress was also made today with the completion on the slab laying on the level section of platform 2C. Steve had the use of a new masonry cutter which made the task of trimming the ex CRC slabs so much easier. By the end of the morning all the slabs requred for 2C had been trimmed. 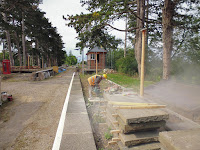 Steve is seen here busy cutting the slabs surrounded by much dust! 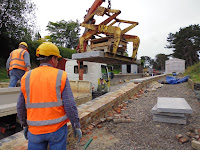 We again had the good fortune of  having Richard from Fairview to help us lay the slabs. The slabs prepared for the slope are being offloaded ready for next week. 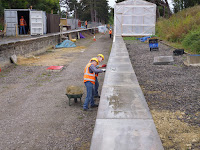 Rod and Terry assisted by Paul and Peter H pointed up the slabs on the level section of 2C. A rewarding result for a great day's work. 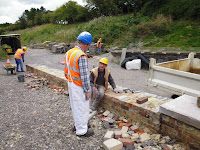 Mike and Steve take a well earned break from painting and slab cutting by having a chat whilst, at the bottom of the slope, Terry is applying the mortar for the first slab. 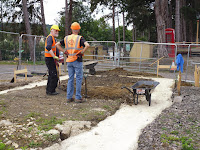 Gordon and Ian undertook the arduous task of removing some of the soil between the foundations of the internal walls of the
station building which was then moved to the south end of the site to make up the falling ground there. 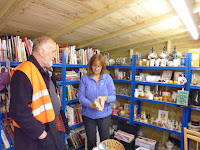 As usual Julie did stirling work manning the Bric-a-Brac shed and she had several visitors during the day. Here she is discussing an item of stock with Ian. Please do come and visit the shed which is open every Wednesday & Saturday. There are some wonderful bargains to be had. 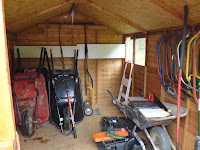 Brian has been appointed the new Quartermaster for the tool sheds.
Being an ex Royal Navy man we know he will want to keep them ship-shape and Bristol fashion! The inside of the new tool shed is taking shape with racking and shelving being progressively installed.


Vic and Martin worked hard on the eastern boundary fencing just past the end of platform 1C. The fencing here needs much work doing to it and several time expired posts were examined or removed. 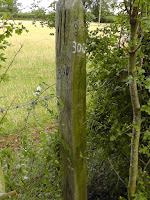 
The above photographs sum up what was a great day for the Broadway project
Posted by BAGBLOG at 11:25