Another fine sunny day at Broadway with the time spent working on a number of minor, but nevertheless useful tasks, by the 14 Volunteers in attendance.
Robin continued with his marathon brick cleaning exercise.  He was joined by Andrew for an hour or so approaching lunchtime.
Having re-located the original small shed to clear the main station footprint there was a need to construct an access gate in the fence.  This was quite a tricky exercise undertaken successfully by Clive.
Late on John B dropped in having returned from holiday and was pleased to see that he can now access the shed, via the new gate, to tidy up the contents. 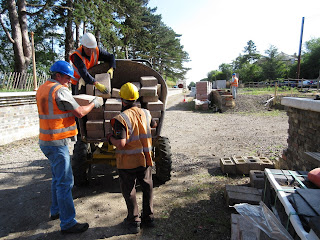 Steve, assisted by Jo, Dave and Keith loaded and transported several dumper loads of blocks from the north end of the site to a position near to the signal box ready to fill the gap in the platform 2 wall.  Steve and John undertook a stocktake of the many piles of bricks located in the cutting and all those which are deemed to be surplus to requirements now bear a blue cross.  The intention is to offer these to both the Minor Works and Lineside Drainage Groups after which any not claimed will be sold off to raise much needed funds. 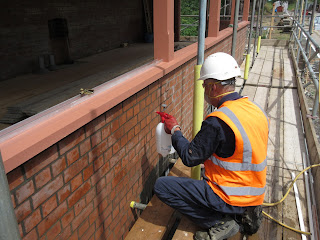 Keith S, working on the front wall of the signal box, continued cleaning the excess mortar from the exterior brickwork while the scaffolding is still in position. The rear and side walls have already been cleaned down to this level.  Hopefully, the signal box windows will be delivered next week after which the scaffolding can be taken down. 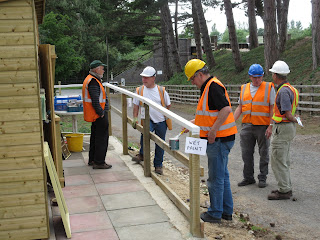 Keith G and Ron T continued rubbing down and then priming the handrail near the new Goods Shed, although Ron seems to have been temporarily distracted by Jim! 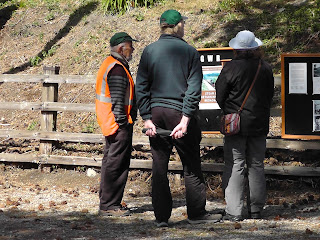 Ron D was manning the shed today and making sure that our visitors were well
informed about what is happening on the site and the railway in general. 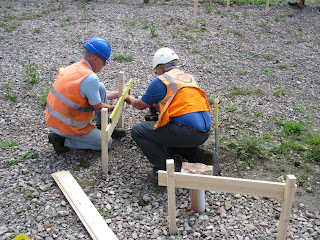 Finally and most importantly John C and John S continued to set out the main station building.  The horizontal timbers in the photograph represent the finished floor level. The finished floor level is designed to be 25mm below the level of the coping stones at the platform edge with a gentle slope between the two so that any unattended pushchair would tend to roll away from the track. 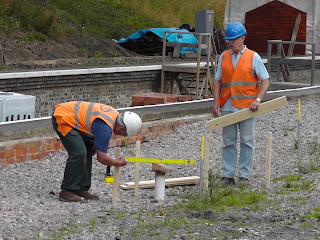 It can be seen quite clearly in this photo how the site falls away to the south.
This is a very slow process requiring frequent checking but at the end of
the day JC pronounced that he was well satisfied with the outcome.
Posted by Unknown at 22:10